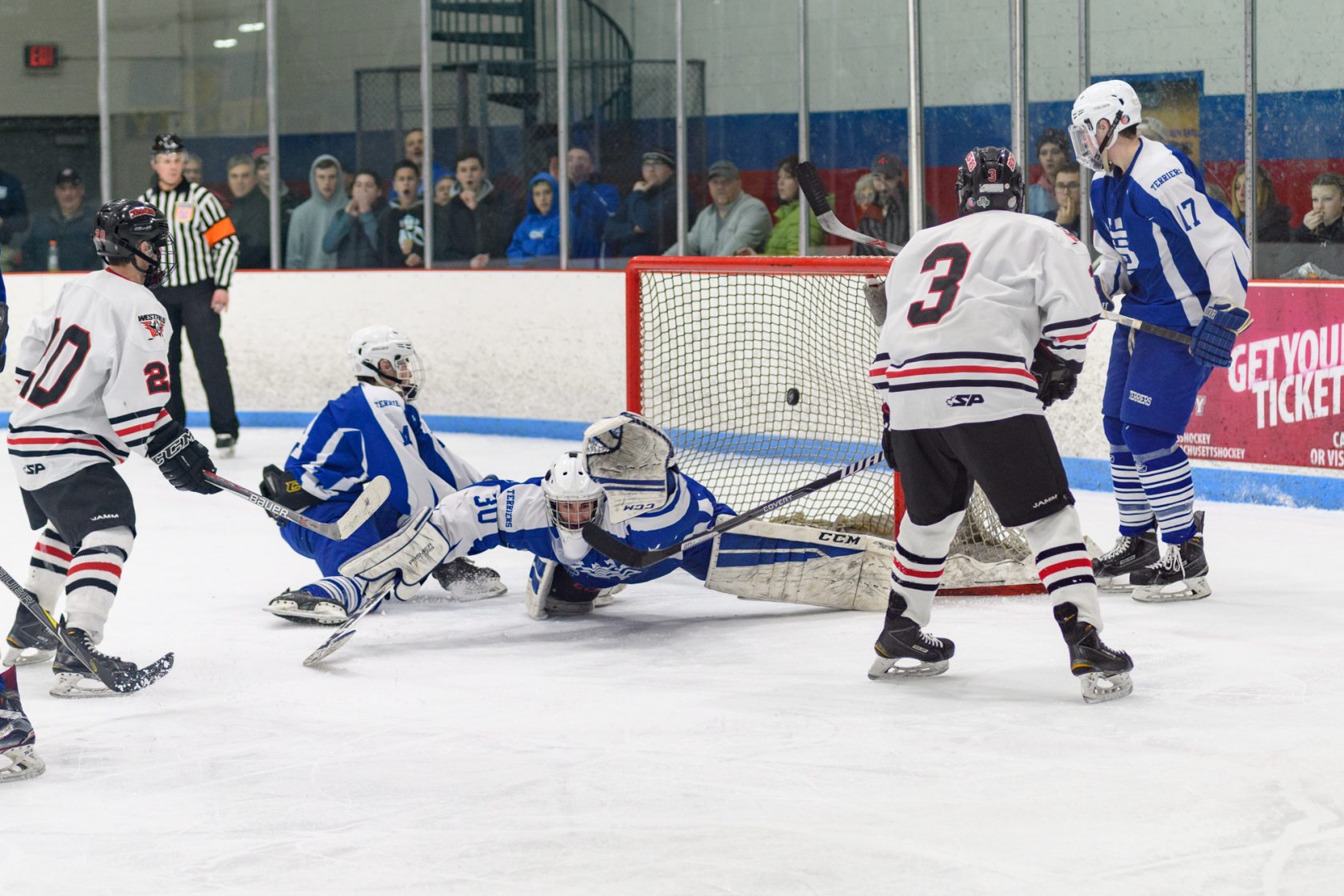 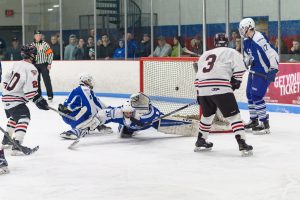 Nate Boucher beats the West Springfield goalie’s lunge toward the puck and nets Westfield’s final goal of the contest. The Bombers defeated the Terriers 5-1 to advance to the West Division 3 Finals. (Photo by Bill Deren)

WEST SPRINGFIELD – The West Springfield Terriers roughed up the Westfield Bombers early, but they were dog tired late.
No. 2 Westfield rallied from an early one-goal deficit, storming back to overtake third-seeded West Springfield 5-1 in a West Division 3 boys ice hockey semifinal Thursday night at the Olympia Ice Center.
Westfield forwards Scotty Bussell and Max Maggipinto scored two goals apiece.
“It started off rough,” Bussell said, “but it’s playoff hockey. We just wanted to get the puck in deep.”
After falling behind 1-0, sophomore Matt Pelletier managed to swing the puck down low to Bussell on the right wing during a power play in the early minutes of the second period. Bussell let a wrister fly past West Springfield goalie Casey Bridges (25 saves) into the opposite corner of the net for the equalizer with 12:03 on the clock.
Later in the period, Westfield (14-4-2) mounted a nice drive well into the West Side zone. The Terriers (11-8-2) broke up a couple attempts but with the puck dangling out in the crease, Bussell plucked it up and drove it in with 5:04 remaining in the period for a 2-1 lead. Spencer Cloutier and Ryan Moorhouse assisted.
Another West Springfield penalty aided Westfield’s efforts a short time later. With 1:10 left in the period, Maggipinto scored on a power play. Pelletier assisted.
Maggipinto scored off a rebound 3:28 into the third period. Danny Antonellis earned the assist. Nate Boucher scored late, hammering home a shot off a pass from Connor Cottengim.
“We knew they’d be coming at us,” said Westfield coach C.B. “Moose” Matthews, whose team squeaked past West Springfield 3-1 the last time the two teams met in mid-January. “They were up and we were ready. We couldn’t finish. We got a little lucky, and the puck finally went in.”
Westfield goalie Cam Parent finished with 17 saves.
Westfield advances to take on top-seeded Longmeadow (17-3-1), in the D3 finals Thurs., March 8 at 8:30 p.m.