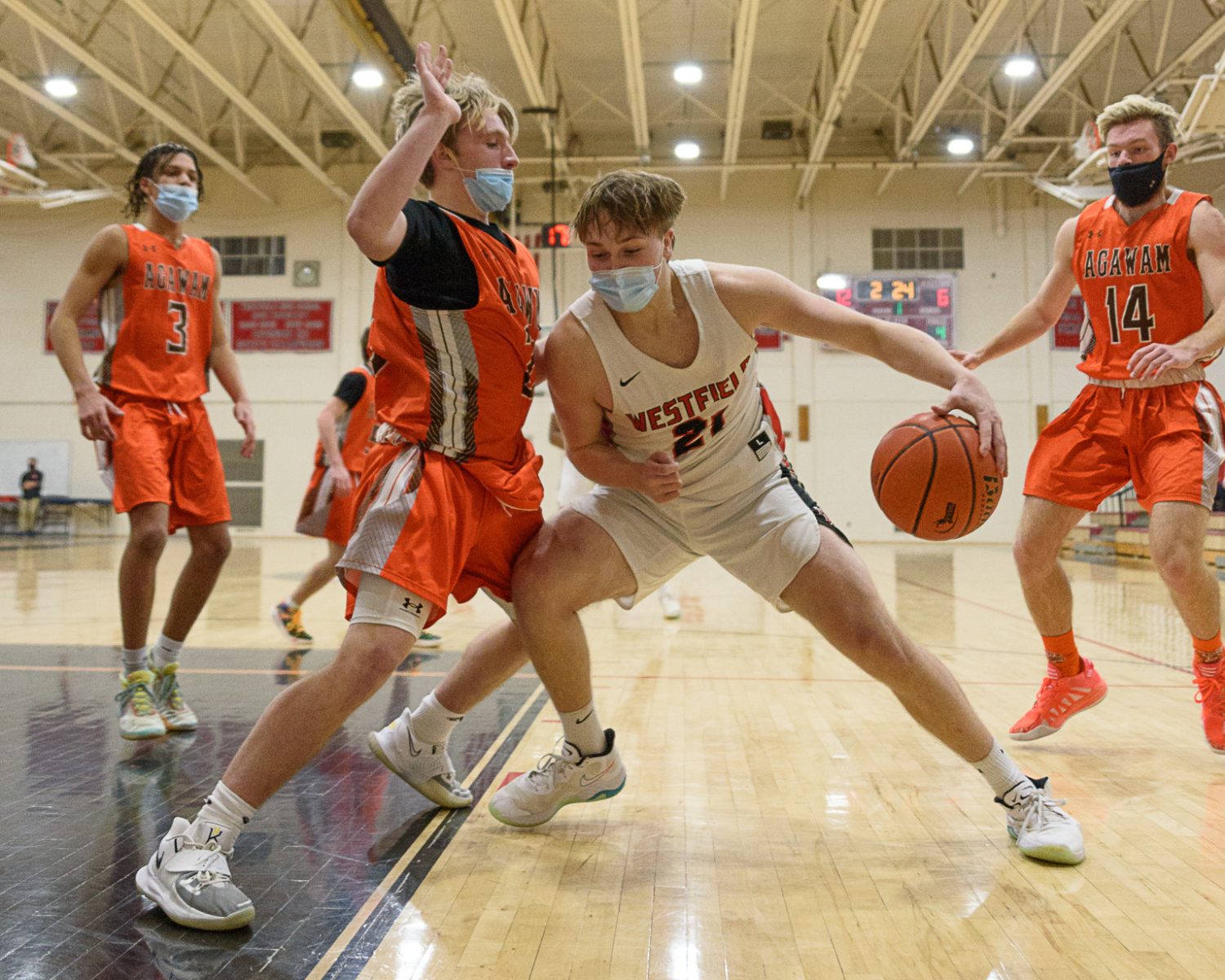 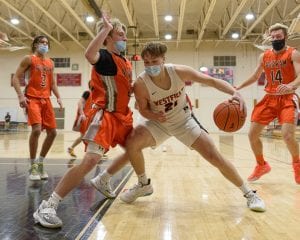 Westfield’s Hunter Cain (21) is surrounded by Agawam defenders as he drives to the basket Friday night. (MARC ST.ONGE/THE WESTFIELD NEWS)

WESTFIELD – The weather outside was frightful for would-be travelers, but the play inside was delightful for fans of the Westfield High School boys basketball team on a snowy Friday night in the Whip City.
Three Westfield players reached double-digits scoring – – Brian Strange (14 points), Nick Anciello (11), and Jake LaBombard (10) – – and the Bombers buried the Agawam Brownies 56-39.
“We were a bunch of hungry dogs,” said Westfield guard Brennan Jarvis. “That’s what happens when you take away basketball from us.”
Westfield returned to action after a brief bout with COVID. The Bombers came out fired up from the get-go.
Jarvis (7 points) distributed the ball evenly among his teammates and even chipped in two key 3-pointers during Westfield’s first half surge. Hunter King also made a pair of 3-pointers, both in the first quarter and one of which kicked off a 9-0 run that resulted in a 26-8 lead with 4:28 remaining in the second quarter. It was Jarvis’s second three that increased the Bombers’ first half point total to 26.
“We have some really good kids, not a lot of selfish players,” Westfield High School boys basketball head coach Josh Balestracci said.
Agawam pulled to within seven points of a tie, 33-26, midway through the third quarter. The Brownies trimmed their deficit to single digits when Dylan Wesley made a steal and scored on a breakaway layup.
The comeback was short-lived however as Westfield quickly expanded its lead, and put the game well out of reach.
Immediately after Agawam closed to within seven points of tying Westfield, LaBombard hit a 3-pointer from NBA range. Then, Strange took over in the fourth quarter. Strange made two 3-pointers, stole the ball and finished off the play with a breakaway layup, made two strong rebounds before delivering an aggressive putback, and fed Anciello inside for another two.
“We’re starting to be at the point in the season where our younger players are starting to adapt to the speed of the game,” coach Balestracci said. “Unfortunately for us, it’s already game six.”
During a non-COVID regular season, Westfield would normally still be 2-4 games away from the halfway point. Due to COVID restrictions adopted by the MIAA and PVIAC – – and approved by the city’s School Board – – the Bombers and the vast majority of Western Mass area teams have just one week remaining.
Westfield closes out its 2021 season with a pair of road games – – at Pope Francis (Feb. 22) and at West Springfield (Feb. 25).

Tigers team up to down HCSS
Westfield Technical Academy 64, Hampden Charter School of Science 33
Josh Sturmer (18 points), DeCarlo Lincoln (13) and Brody Zabielski (9) helped fuel a bounce-back victory for the Westfield Technical Academy Tigers.
“We really took nothing for granted and tried to execute as much as we could while limiting turnovers,” Westfield Tech boys basketball coach Kyle Dulude said. “We enjoyed a nice bus ride home and the guys enjoyed each other’s company and chemistry, and morale is high. It is great to see this positivity during these COVID times.”