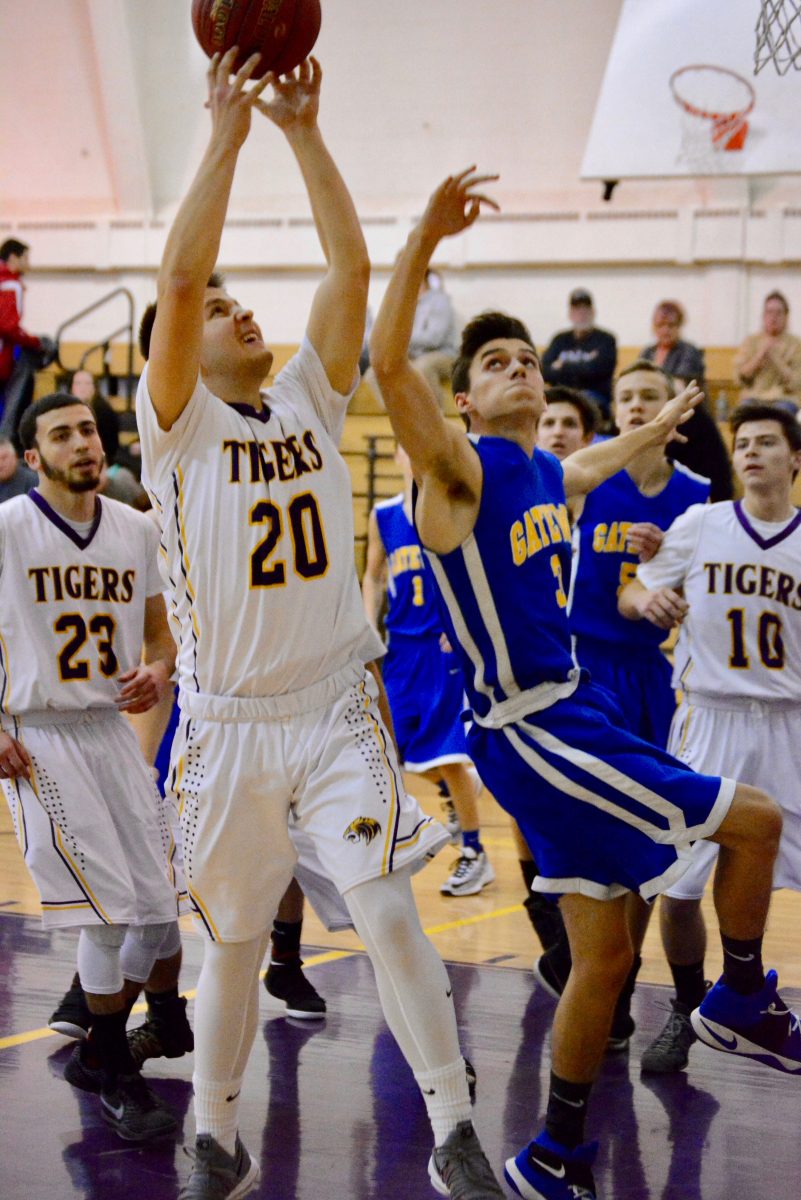 WESTFIELD – Matthew Porter (23 points) and Noah Connor (15) reached double-digits scoring and helped fuel the Pioneer Valley Christian boys basketball team’s 19-2 second quarter outburst en route to a 53-42 victory over St. Mary’s in the opening game of the 3rd annual Box Out Cancer Challenge Thursday at Westfield Technical Academy High School.
“They killed us in second quarter points,” St. Mary’s coach Joe Molta said of the opposition’s huge eight-minute spurt. “Basically that’s where the game got away from us.”
St. Mary’s led at the outset, taking an 11-7 advantage through the game’s first eight minutes. The tide turned in the second frame though.
Pioneer Valley continued to build on its lead, and led by as many as 19 in the fourth quarter.
St. Mary’s rallied though. 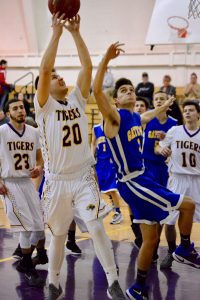 Westfield Tech’s Mark Klyuchits (20) gets his finger tips on the ball in hauling in a rebound against Gateway Thursday. (Photo by Chris Putz)

In the fourth quarter, Jake Butler (22 points, 10 rebounds) had a silky smooth baseline drive to pull St. Mary’s within 13 points, 42-29. Mike Pepe soon followed with an electrifying and-one, fist-pumping and chest bumping as he brought the Saints within 12.
Pioneer and St. Mary’s traded 3-pointers in the final two minutes with Saints’ Kevin Rockwal draining one. And although it did not reflect it on the scoreboard, Butler had another nice play throwing an inbounds pass off the back of a defender, catching the ball, and converting a layup.
“Our kids never give up,” coach Molta said. “Effort is never an issue. We were out-talented. There’s no shame in that.”
Luke Willenborg had seven points for St. Mary’s. Saints’ Rockwal and Jack Lamirande finished with five points apiece.
It was much more than just a game though.
The game was played in honor of former longtime Westfield Tech boys hoops coach John Wiley, who passed away after losing a battle against cancer, and to create awareness about the disease.
“It’s a really great thing for the community,” coach Molta said, noting similarities between this two-day event and the now defunct Greg Wynns tournament. “It’s a privilege to be able to play and the competition is pretty good.”

Westfield Technical Academy 59, Gateway 26
Westfield Tech overwhelmed Gateway with Ruvim Suprunchuk leading the way with 16 points.
Suprunchuk was not alone in his effort.
Westfield Tech’s Andrew Czeremcha netted a double-double (13 points, 12 rebounds), Mark Klyuchits racked up 12 points and nine rebounds, and Josh Bush finished with 11 points and seven rebounds.
“Our boys were excited to play,” Westfield Tech coach Kyle Dulude said. “That is the bottom line. They put the effort in all night.”
Suprunchuk got his team off to a good start with the first points of the game early, dropping in a 3-pointer. Westfield Tech reeled off 13 straight points to begin the game and led 13-0 after one quarter.
“(That lead) allowed us to attack with different plays,” said coach Dulude, also noting the game’s significance in the bigger scope of things. “The guys enjoyed hosting the Box Out Cancer tournament and having all four schools in the building at once created positive atmosphere for all. The event makes the games a little more special. Each student goes home with something regardless of the score and outcome of the game.”
Westfield Tech will next play Pioneer Valley Christian Friday at 7 p.m. The game between the Saints and Gators has been postponed because of Gateway’s school early dismissal due to winter weather.