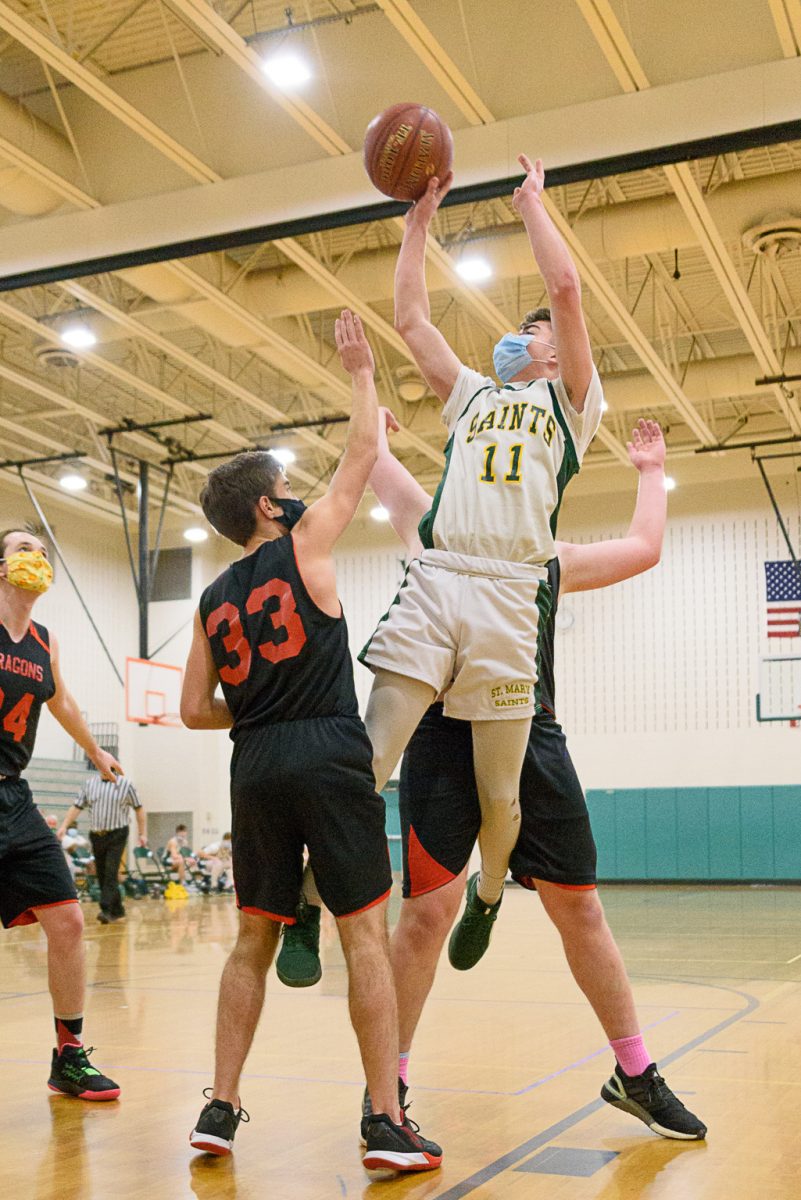 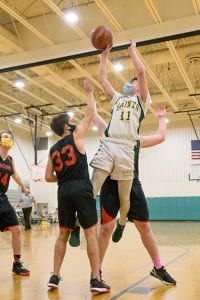 Brady Collins (11) rises above the defense for the Saints during a high school basketball game Thursday against PVCICS at Westfield Intermediate School.

WESTFIELD – Although St. Mary’s junior Brady Collins’s link to a certain NFL Hall of Famer is only in his namesake, the Saints guard delivered a G.O.A.T.-like performance Thursday night that elevated his team to some very lofty heights.
Collins scored a game-high 18 points, including four 3-pointers to fuel the St. Mary’s High School boys basketball team’s 53-24 win over Pioneer Valley Chinese Immersion Charter School at Westfield Intermediate School.
“Today we meshed well,” Collins said. “We knew we had to come out and get a win.”
With both teams initially struggling out of the gate, it was Collins who scored the only made basket in the game’s opening 3-plus minutes. He then deferred to Tom Baillargeon (10 points), who made a pair of 3-point baskets sandwiched around a two from Colin Reed (6). St. Mary’s led 10-2.
“We needed to get out right away and lay the pace of the game in how it was going to go,” Collins said of Baillargeon’s two 3-point shots.
Still, PVCICS managed to pull within four, 10-6, late in the final minute of the quarter with four free throws. Hunter Palm made 3-of-3 from the line with 45.7 seconds remaining in the quarter after being fouled attempting a three.
Collins helped St. Mary’s take a 15-8 lead early in the second quarter with his first 3-pointer. Josh Baillargeon (9 points) banked in a short jump shot midway through the quarter to give the Saints their biggest lead of the half, 17-8.
PVCICS closed the gap to three points late in the half, giving the visitors false hope.
Collins took over in the third quarter, draining two straight 3-pointers and Reed buried one as well from long range, all within nearly a 60-second span to widen St. Mary’s lead, 30-17. A lay-up from Collins capped off the quarter’s scoring, resulting in a 20-point Saints advantage, 37-17.
Collins opened up the fourth quarter scoring with yet another three, sinking PVCICS hopes of a comeback.

GIRLS BASKETBALL
Pedolzky rallies Bombers with 26-point explosion
Westfield 31, Amherst 26
Westfield rallied from a 7-point, fourth quarter deficit with a sensational effort from Chandler Pedolzky, who scored 26 of the team’s 31 points. Pedolzky scored 14 in the fourth quarter alone.
“Chandler was unbelievable today,” Westfield girls basketball head coach Dylan Willey said. “She willed us to a win with her physical presence in the paint. She rebounded; she scored. …It was a really gutsy performance by her…and as a team.”
Emma Pedolzky was effective in her first game back from injury that sidelined her for a short period of time, Saige Smith provided solid defense and delivered crisp passes, and freshman Alexus Sanchez came off the bench to bank a key 3-pointer off the glass in the fourth quarter.
“That was big time,” coach Willey said of Sanchez’s long range shot. “It was nice to see her get in and make that basket.”