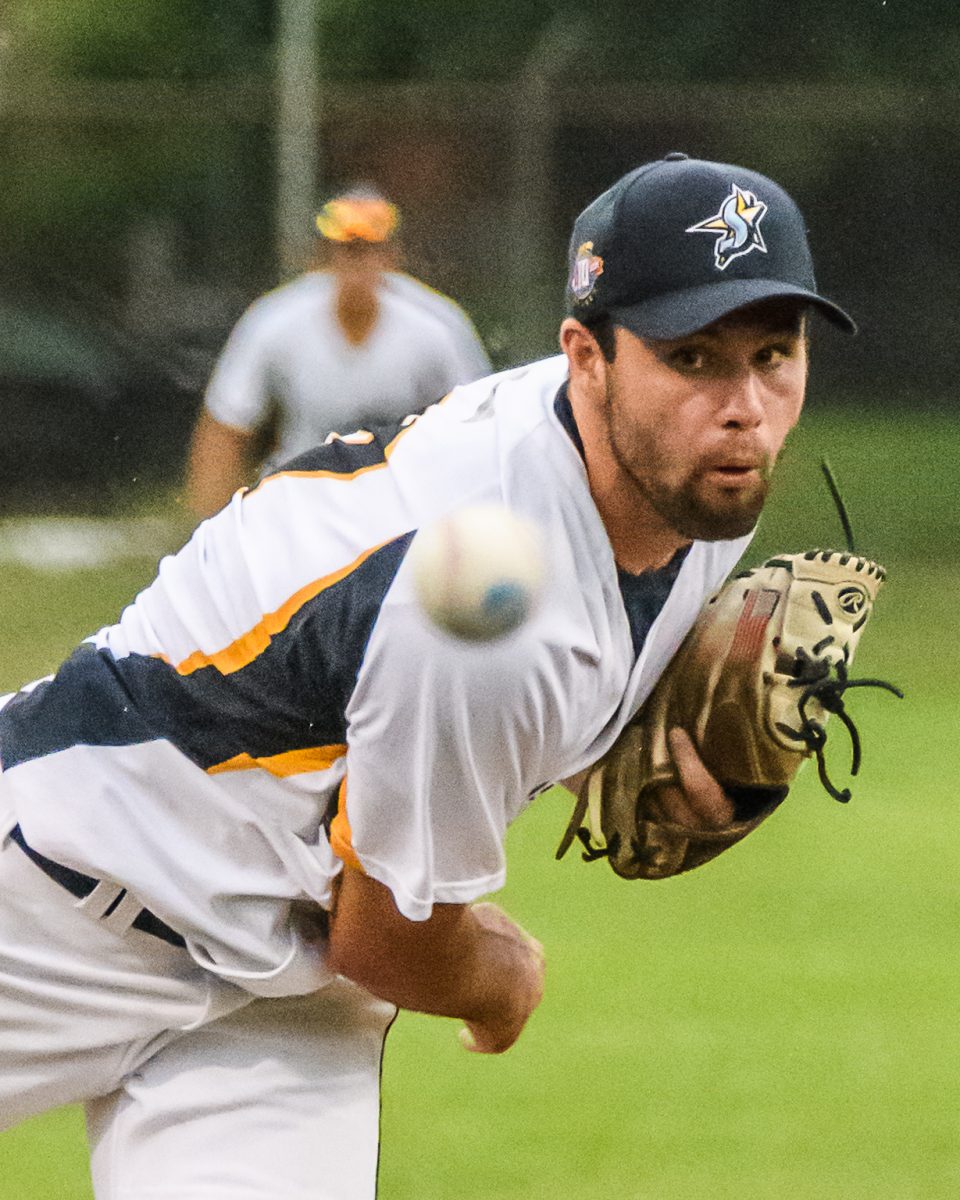 WESTFIELD – The good news following Wednesday night’s home opener for the Westfield Starfires – the pitching staff allowed just four hits. The bad news: three of those hits left the yard at Bullens Field.
The Worcester Bravehearts (2-2) clubbed three solo home runs in a 3-1 win over Westfield (1-1), handing the Starfires their first loss of the season in the Futures Collegiate Baseball League.
“They always say the solo ones don’t hurt you, but today I guess they did a little bit,” Starfires field manager/head coach Tony Deshler said.
Three of Worcester’s top four hitters in the lineup – lead-off batter Mariano Ricciardi (Dayton), No. 2 batter E.J. Exposito (NYIT), and clean-up hitter Ben Rice (Dartmouth) – each hit homers.
“Our pitching staff was fine,” Deshler said. “They just left a few balls up.” 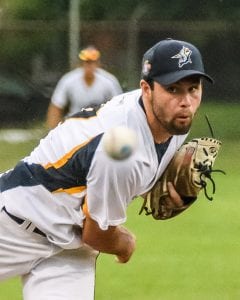 Exposito delivered his team’s first long ball, drilling a one-out, first-inning pitch off Westfield righty Anthony Redfern (Georgetown University) over the left field fence for a 1-0 lead.
The one-run dinger proved to be Redfern’s only blemish in an outing that lasted 3 2/3 innings. After Exposito homered, No. 3 batter Aidan Wilde (Stonehill) walked and stole second base, but the Starfires starting pitcher bounced back. Redfern retired the next three batters via strikeout, fly out, and ground out to end the threat.
Redfern got into a bit of trouble in the second inning, hitting P.J. Barry (Saint Leo) with a pitch and walking Trevor Johnson (Dartmouth), but again escaped unscathed. In the third inning, Redfern struck out Worcester’s top three batters in order. In the fourth, he forced two fly outs and walked a batter before exiting.
Westfield’s bats remained relatively silent for much of the game. The Starfires managed to put a runner on against Worcester starter Cole Chudoba (Assumption College) in each of the first three innings but could not push any of them across home plate.
Drew DeMartino (University of Hartford) reached on a hit-by-pitch in the first inning, Eric Callahan (Millersville Univ.) walked and stole second base in the second, and DeMartino singled in the third. All three base runners were left stranded.
Chudoba retired the side in the fourth; Westfield threatened to score in the next inning.
Callahan and Cedric Rose (Herkimer Community College) singled off Chudoba in the fifth inning. Both runners advanced on a one-out wild pitch. Braydon Seaburg (Quinnipiac Univ.) walked to load the bases. Chudoba got out of the jam though when Exposito made a lunging stab at short and turned a spectacular inning-ending, 6-4-3 double play.
Westfield finally cracked the goose eggs on the scoreboard an inning later when Worcester turned to its bullpen.
DeMartino drew a lead-off walk in the sixth off Worcester reliever John West (Boston College). With one out, Mark Coley (Univ. of Rhode Island) singled through the left side of the infield. Callahan singled with two outs, scoring DeMartino.
Rice took Westfield reliever Andrew Roman (Salve Regina) deep in the eighth inning, driving the ball over the left center field fence to help Worcester reclaim a one-run lead, 2-1.
Ricciardi delivered the final dagger in the ninth, hammering a homer off Crawford. Crawford, who turned down a chance to play for the Kansas City Royals, to play for the University of Connecticut Huskies, struck out three of the five batters he faced often registering a fastball in the mid 90s.
“We kind of thought coming in, coaches just talking. that the pitchers have the advantage the first couple weeks,” Deshler said. “Just talking to the guys, I kind of told them, ‘you’re not going to get the results you want right away, but play the game the right way, hustle around and have the right mindset, the results will turn your way eventually.’”
With a roster laden with talent, some of whom are expected to compete for minor and major league attention, the Starfires are expected to contend for its first postseason appearance. That being said, the opposition is not just going to back down.
“If you just look at every roster on paper, everyone’s talent is great,” Deshler said. “We expect to be in close games pretty much every night. Hopefully, we will have a few more where we are going to take the lead early and put some teams away.”
Notes: Westfield opened the 2020 season with a 6-4 road victory over the New Britain Bees 6-4 Wednesday night. Coley went 2-for-4 with a home run, walk, two runs and two RBIs. DeMartino (2 doubles, walk, 2 RBIs) and Ramon Jiminez (RBI) both went 2-for-5. Crawford and Michael DeMartino each doubled. Starfires pitcher Nick Dombkowski (University of Hartford), of West Springfield delivered a one-hitter in 3 2/3 innings of work. He struck out four batters and walked two in allowing two runs. Carter Cousins (Georgetown Univ.), of Westfield pitched a scoreless inning and a third while striking out two batters. …Scouts from organizations such as the Texas Rangers and Detroit Tigers were in attendance. …The Starfires, who were expected to make up their road game against New Britain Thursday after being rained out earlier in the week, will return home to face the Brockton Rox Friday at Bullens Field at 6:30 p.m.