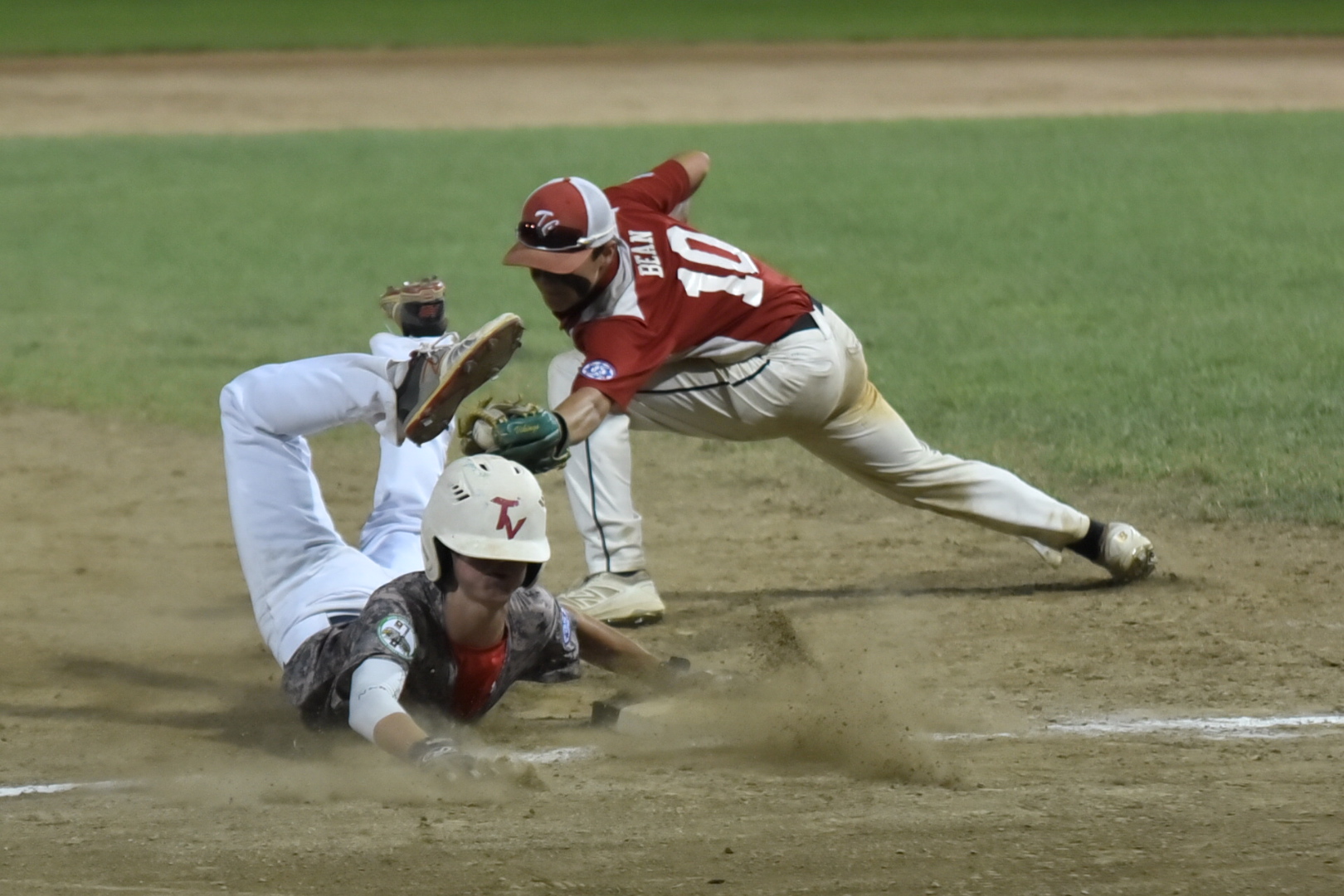 WESTFIELD – It was a like a heavyweight boxing match.
A jab here a jab there, a sidestep and a bob and weave, but it was a sixth-inning explosion that proved to be Tri-Valley, California’s knockout blow.
Tri Valley upended Tri-County (Maine), 9-3, in a Babe Ruth Baseball 14-Year-Old World Series semifinal Wednesday night at Bullens Field to land the final spot in Thursday’s championship game. First pitch is at 6 p.m.
“I wouldn’t really call it a rivalry,” said Tri Valley’s Jack Grant, who went 2-for-2 with two walks, two runs, and three RBIs. “We played each other a few times. It was a good battle, a good game.”
It may not be a full-blown rivalry just yet, but Wednesday night’s match-up of behemoths rivaled any recent Red Sox-Yankees contest of late. 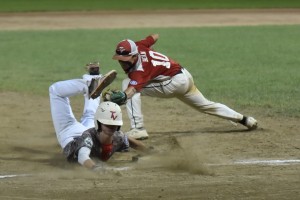 It has been somewhat of a one-sided affair for Tri Valley, who blew out Tri-County (Maine) 20-0 in the 13-year-old World Series matchup a year ago. Several of the same players remain, and it should be noted though that Tri County, in fact, won an earlier meeting against Tri Valley (California) in pool play last year.
On Wednesday, both pitchers were at the top of their games early – Tri-County, Maine’s Janek Luksza and Tri Valley, California’s Josh Anderson cruised for a bit with both teams exchanging counter punches for some time.
Tri Valley made its move in the bottom of the fourth.
Jack Grant walked to begin the fourth, advanced to second on a Thomas Gavello sac-bunt, and scored on Max Masajlo’s single to shallow right-center field.
Tri-County rallied.
With two outs in the top of the fifth, Jonny Pruett belted a booming double to center field. Cameron Godbois moved Pruett into scoring position by roping a hard ground ball to right field. An outfield error resulted in a 1-1 tie.
The Pacific Southwest’s best 14-year-old Babe Ruth squad responded with a two-out rally of its own.
Michael O’Hara and Joey Battilega singled, and Grant walked to load the bases for Tri Valley. Then Gavello flared a two-run single to shallow left-center field, just beyond the grasp of the shortstop’s glove.
Tri-County would not go quietly into the night.
In the top of the sixth, Charlie Morton and Luksza hit consecutive one-out singles. With two outs, Rodney Bean singled to load the bases. Wyatt Williamson followed with a two-run double that landed just inside the left field line.
Then came Tri Valley’s knockout punch.
Sheppard and Masajlo singled, and Chevalier reached on a bunt single to load the bases for Tri-Valley in the bottom of the sixth. After a successful pickoff at first base, Jackson was hit by a pitch to re-load the bases. O’Hara knocked an RBI hit through the right side, and Battilega hit one to the left to make it 6-3. Grant crushed a bases-clearing double to deep left field for a 9-3 advantage.
Evan Chavalier came on to close out the final 1 1-3 innings to end it.