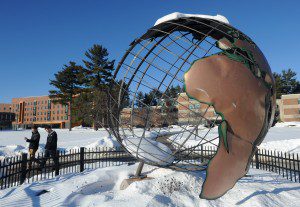 WESTFIELD – The world is disappearing – if the globe on the Westfield State University campus is to be believed. Australia is gone, South America is missing and neither the Japanese nor Philippines archipelagos are represented.
A large globe sculpture which once graced the lobby of the Stanley Home Products international headquarters was given to Westfield State College decades ago and was initially installed in the Ely Campus Center before it was moved to the quad in the center of the campus.
The WSU spokesperson, Molly Watson, said yesterday that the globe is a focal point of the campus and it was apparently the focal point of campus celebrations after the New England Patriots won the Super Bowl on Sunday.
Watson said that students gathered around the globe and, she said, “two or three” students attempted to get into the globe. 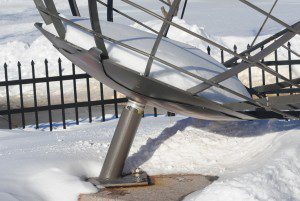 The angular support of a landmark globe sculpture on the Westfield State University campus appears to be intact after a Super Bowl celebration Sunday evening. (Photo ©2015 Carl E. Hartdegen)

“There wasn’t damage to the globe itself” she said but said “the fragile aluminum piping that holds it in place” was damaged “when at least two students climbed inside.”
Watson said that campus police “dispersed the crowd right away once people started to get too excited” but apparently not before damage was done.
A visual inspection of the globe shows that the tubular support which holds the globe at the appropriate angle appears to be intact while other aspects of the globe appear to be damaged.
Passing students said that Australia has been missing for some time but said that South America was in place recently. Watson said that Australia was never represented on the globe “because it was not within Stanley (Home Products)’s global business reach.”
However, an undated photograph published in an April, 2013, edition of The Westfield News shows Australia in place on the globe. Campus lore has it that the representation of the continent went home with a student from Australia years ago. 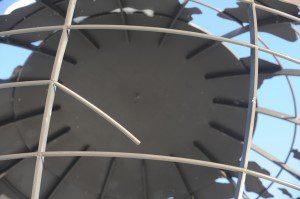 Other damage which appears to be recent includes broken and bent longitudinal and latitudinal meridians, the southern part of the African continent which is bent away from the globe as is (to lesser degree) the southern part of the Indian subcontinent and scrapes on the surface of the remaining land masses.
“Our students are the ones that are really upset about this,” said Watson and are expressing their disapproval of the apparent vandalism on social media applications such as YikYak and Fade, as well as sites such as Facebook and Instagram.
Snippets of cellphone videos have been posted to Internet sites and appear to show a large crowd around the globe and at least one person is seen jumping bodily onto the globe.
While nobody is seen trying to get inside the globe, one video shows projectiles, apparently snow balls, hitting the globe and more than one of the videos shows it rocking wildly.
The videos show that South America, now missing, was still represented during the post Super Bowl celebration.
Watson said that the globe has been damaged and repaired before. She said that the campus landmark “is a popular spot for photos all throughout the year and students have been known to jump the fence and climb inside.”
“Action is expected to be taken, which can range from charges of vandalism and restitution to discipline per the Student Conduct Policy,” she said.