Westfield Police Capt. Mike McCabe stands near his awards for participating in past Boston and New York City marathons. This weekend, McCabe will be running for an even bigger cause. (Photo by Chris Putz)

WESTFIELD – While the race is still on to find a cure for cancer, one local member of the police force is devoting his time to make the run in an uphill battle.
Westfield Police Capt. Michael A. McCabe is about to travel a long, winding road for the second straight year when he runs the Mass Dash this weekend. The event is a two-day, 200-mile run from Mount Greylock to Boston to raise money to benefit the Jimmy Fund for children’s cancer research.
McCabe’s leg, or section, of the run will begin along the western slopes of Mount Greylock from Jones’ nose to the top of the mountain, continue west of Smith College into downtown Northampton and, finally, into Westboro for a total of 16 miles.
“It’s a good cause,” said McCabe. “Cancer affects everybody’s life. It’s a horrendous way to die. Everybody has had a family member or loved one die of cancer. It’s no fun at all.”
McCabe’s father died of brain cancer two years ago.
McCabe will be part of a 12-member relay team, which also includes Elm Electrical president Bob Bacon, Noble Hospital Dr. Brian Sutton, four local state troopers, and two district attorneys.
The entire team’s run will last approximately 29 hours.
According to McCabe, Massachusetts State Trooper Mike Blanchette and his wife, Agawam Police Officer Jennifer Nardi-Blanchette formed the team after learning that their then seven-year-old daughter, Sofia, had Hodgkin’s Lymphoma.
The team is aptly named Sofia’s Cancer Crushers.
Last season, McCabe and his teammates raised nearly $15,000, but the Westfield Police captain said this year he is still well short of his personal goal.
“Obviously it’s a great cause,” he said. “One hundred percent of the money goes to the Jimmy Fund.”
This is not McCabe’s first rodeo, nor is it his second.
An avid runner, McCabe completed the Boston Marathon in 2005 and 2009, as well as the New York City Marathon in ’05. More recently, he finished this past year’s Noble 5K Road Race third in his division.
Anyone interested in donating money to McCabe’s charitable run is asked to visit www.active.com/donate/massdash2012/MMcCabe30. 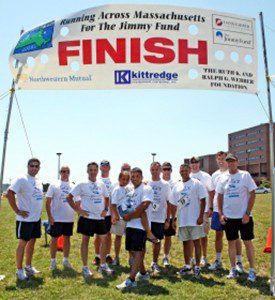 Westfield Police Capt. Mike McCabe stands alongside his teammates, most of whom are expected to participate in the upcoming Mass Dash, a two-day charity run to raise funds for the Jimmy Fund to help fight cancer. (Submitted photo)