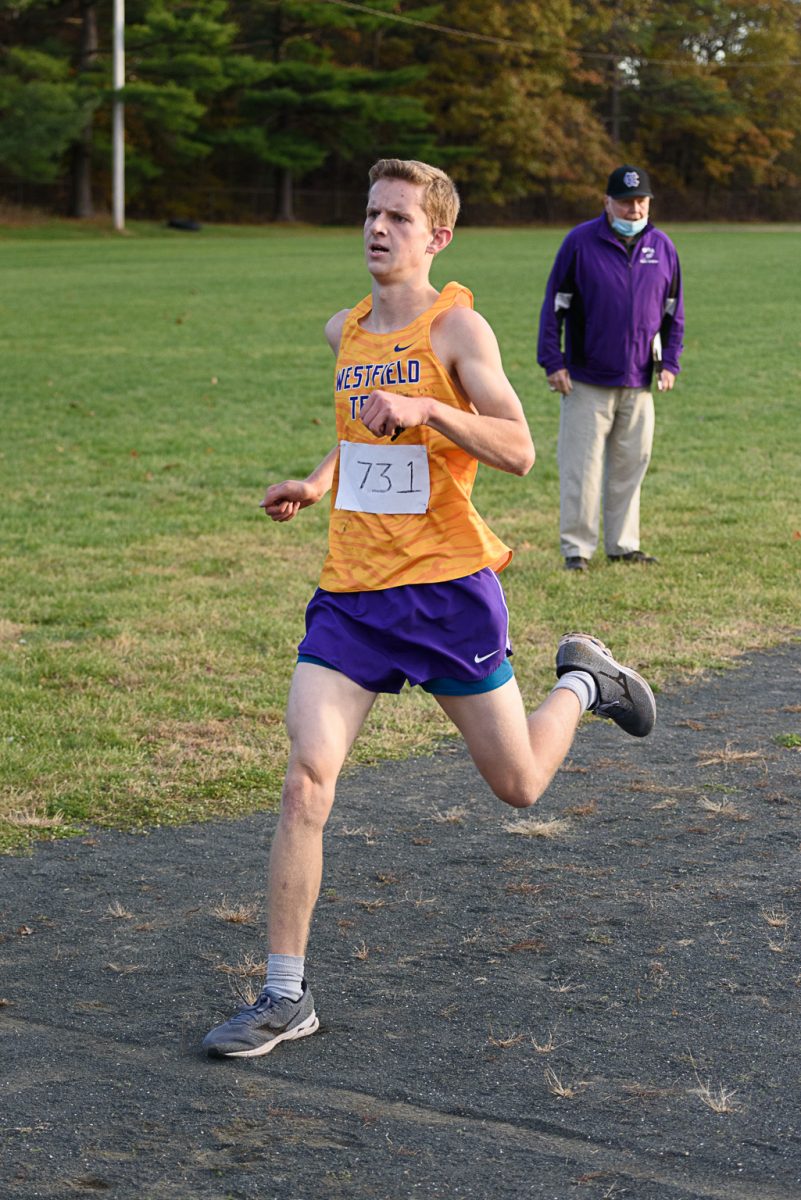 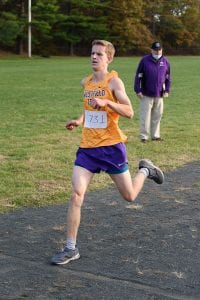 WESTFIELD – Westfield Technical Academy senior Zackery Cernak apparently saved his best for last.
Cernak blew away his personal best time of 18:01 on the team’s makeshift 3.03 mile home course at Westfield High School, crossing the finish line at Thursday’s final meet of the regular season in 17:17.
It was one of the best times logged all season by any runner at Westfield High School.
“I was just trying to be myself,” Cernak admitted. “I was surprised.”
Cernak said his friend, Mike Durkee, the team’s captain in 2019 who graduated last spring, was the source of his inspirational run.
“I thought about how he used to push me,” said Cernak, who zipped far ahead during the final stretch of Thursday’s race. “As soon as I saw the cameraman (at the finish line) I sprinted as fast I could.”
Westfield Tech claimed the top three spots at the meet, and placed 10 runners among the top 11. It was a convincing victory for the Tigers. St. Mary’s did not have enough runners to log an official score.
Westfield Tech senior Evan Ploof finished runner-up in 21:44, and Carter Slack took home the bronze with a time of 21:57. St. Mary’s Aiden Fitzgibbons placed fourth (22:03). Tigers’ Matthew Thayer (22:29) and Jackson Lambert (22:57), both seniors, James Thibeault (24:15), and Ed Shvyryc (24:15) seized the fourth through seventh spots. 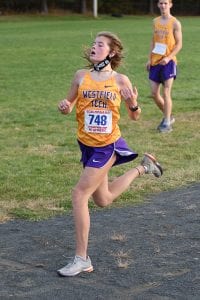 Cernak was not the only Westfield Tech runner that claimed victory Thursday.
Westfield Technical Academy freshman Kailyn Hawley shattered her own personal best (24:24) with a supercharged first place finish in the girls race. Hawley ran a 22:42.
What was the secret to Hawley’s late season surge?
“I just ran faster,” she said. “It’s really fun here. I don’t want to leave.”
St. Mary’s claimed second through fifth to take the team competition, 24-31. Saints’ Emily Durkee was the runner-up, finishing in 25:12. She was followed by Mia Rozell (26:27), Catie Seklecki (26:52), and Katelyn Corriveau (27:04).

BOYS SOCCER
Tigers celebrate shutout of Saints
Westfield Technical Academy 6, St. Mary’s 0
Sophomore Jon Vella scored the game’s first goal on an indirect kick from about 25 yards out, sophomore David Bulatov and junior Adam Strycharz each scored a pair of second half goals, and sophomore Livingston Ndamukong chipped in with a goal as Westfield Tech sent its seniors out on a high note at Bullens Field.
“I feel these kids really made the most of this condensed season,” said Westfield Technical Academy boys soccer coach Kyle Dulude, whose only loss came at the hands of an upper division squad, Easthampton. “The respect I saw among our players day in and day out is what I will remember most. The day-to-day, small things made this season special.”
Dulude acknowledged seniors Brody Paquette, Raven Carrasquillo, and Simion Mocanu for their contributions over the last couple of years, which included runs to the Western Massachusetts semifinals and finals, where they fell in double overtime.
“I can’t say enough about how great they are as people,” coach Dulude explained. “There was tremendous growth and love between these guys. It was an extreme pleasure spending time with these players.”
The Tigers head coach also expressed his optimism for the future.
“Our hope is that our world will be in a better place sooner than later and that next soccer season will exist with or without the new COVID soccer rules,” Dulude said. “Our guys love the game and just want it to be there in the future to play. Although our numbers seemed to be at an all-time low this year, the passion for soccer was still very high and our guys were very excited to play day to day.

GIRLS SOCCER
Saints post seventh straight shutout to complete unbeaten season
St. Mary’s 2, Westfield Technical Academy 0
Ali Goodreau and Anna Puttick scored one goal apiece to lead St. Mary’s past Westfield Tech in the season finale. Emma Bialas and Eliana Umana Kimura each assisted.
Amelia Willenborg led another stout defensive outing in net for St. Mary’s, logging nine saves and recording her seventh consecutive shutout of the season. The Saints (7-0) outscored their opponents this year, 29-0.
“I’m just so proud of the girls this year,” St. Mary’s girls soccer coach Patrick Olearcek said. “Playing very tough teams like Easthampton, Westfield Tech and Smith Voke and competing so well was a tribute to how well they trained and communicated all season. I know it was a shortened season but to go 7-0 and not give up a goal the entire season was special.”
The talented goalie was helped out by teammate Macy Woodger, who also provided exceptional defense out in front of the goal.
Olearcek also recognized seniors Chloe Lussier and Paighton Ramos for their efforts.
“They have helped be the building blocks for this program,” Olearcek said. “Without them leading the way, the season would have been far less successful.
Westfield Tech goalie Lindsey Deland was also tough in net, collecting 15 saves. Tigers seniors Jess Bush, Christina Mosijchuk, Angelica Chepurin, Amanda Garstka, and Elizabeth Beshara were recognized for their contributions to the soccer program.
“I’m excited how my team played this season and continued to improve,” Westfield Tech girls soccer coach Lyle Washington said. “We have a great foundation to work with and fingers crossed we’ll come out strong next season.”

FIELD HOCKEY
Griffith nets hat trick as Bombers turn back Brownies
Westfield 5, Agawam 2
Claire Griffith recorded a hat trick, Meghan Bowen scored two goals, and Abby Daley had two assists in Westfield’s latest victory. Griffith also had an assist.
Mia Wood scored twice for Agawam. Elizabeth Santore assisted both times.
Westfield goalie Ariana Ciaschini finished with 10 saves. Agawam keepers Gabriella Zollo and Serena Croteau combined for six saves.
“Agawam was great competition for us but we held our own, played our game, and came out victorious,” Westfield field hockey coach Courtney Albee said. “Westfield came out ready to play from the start and played their hearts out anticipating this to be our last game of the season. …This team has not taken anything for granted and played their hearts out this entire season, possibly ending with no losses.”