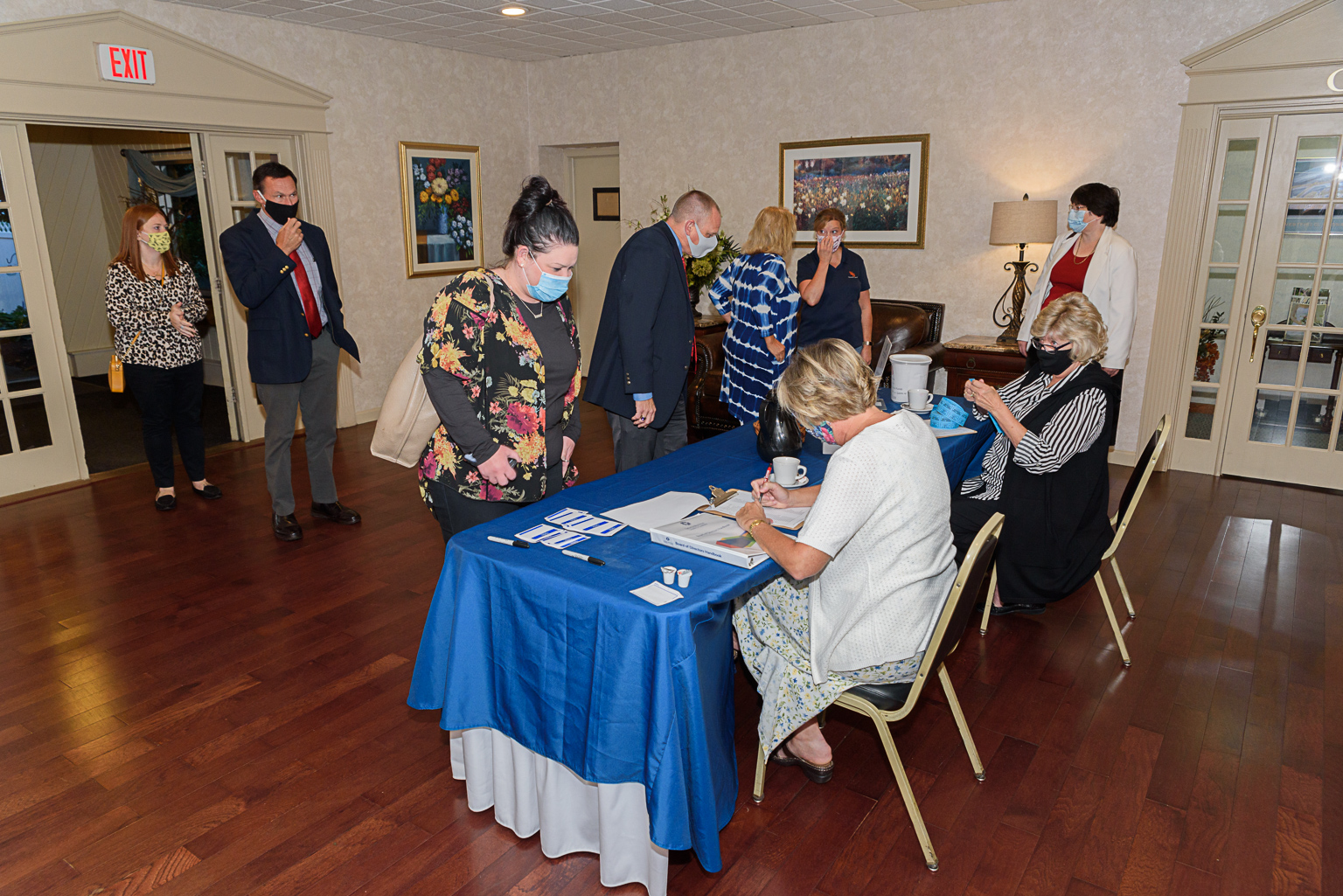 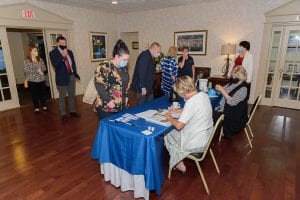 Chamber of Commerce members arrive for the first in-person breakfast since the start of the pandemic. (MARC St. ONGE/THE WESTFIELD NEWS)

Mayor Donald F. Humason posted photos taken during the event to his Facebook page, which spurred many comments about a perceived lack of social distancing.

“The chamber, as explained to us, followed social distancing and restaurant guidelines,” she stated Sept. 20. “All guests wore face masks until they were seated at tables six feet apart and with only six guests at a table to enjoy a plated, served meal. I was so appreciative of everyone’s cooperation.”

The event was hosted at Tekoa Country Club. Several attendees stated that masks were worn until guests were seated and instead of a buffet, breakfast was served plated at each table. Masks were also not worn while speakers were at the podium. 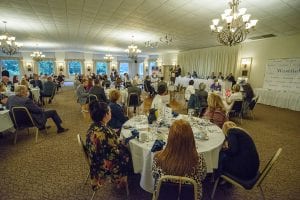 Humason addressed the backlash from his post and said the annual event — which was the first Chamber breakfast since COVID-19  hit Massachusetts – was much smaller than normal.

“I received and accepted an invitation from Kate Phelon and the Greater Westfield Chamber of Commerce to attend their annual September breakfast.  As an invited guest I had nothing to do with planning the event,” Humason said via email. “Typically this breakfast is held at the 104th Fighter Wing in their dining hall but I was notified that it would be moved to Tekoa Country Club. It was my understanding that the Chamber had contacted Joe Rouse at the Board of Health and received permission to hold the event.”

“I received an email invitation to the Chamber event which set forth the safety protocols to be followed. Additionally, the Chamber informed me that the event was approved by the Westfield Board of Health,” Velis said in a written statement. “Indeed, I attended the event; and I own it. I apologize for any lapse in judgement on my part.”

Close to 400 comments were made on Humason’s post as of press time Monday. Most questioned social distancing protocols and a few comments supported the event and practices

“Wow all these representatives I don’t see any of them with a [mask on] and no social distancing what the heck is going on” wrote one commenter. “So kids are remotely learning yet you are able to have an indoor gathering with over the 25 count and no masks. Your priorities seem a little off,” stated another.

Some comments called out the elected officials for what the commenter perceived from the photos as a lack of following state orders during the pandemic.

“This is really disappointing to see. I expect more from the leaders of our town, state and senate (Neal) and a better response when asked about it. The mayor said ‘ It was great to see so many people in person!’, I’m sure it was. I’m sure that many people would like to see their friends, colleagues, and family members in person but the majority of us are doing the right thing and staying away from large crowds and gatherings. My niece would have loved to not have cancelled her wedding this summer. My daughter would have loved to have a senior prom, banquet, proper graduation, anything… Restaurant owners would love to have full dining rooms and a sense that they are going to be able to stay afloat. Regardless of whether this was a ‘legal’ gathering or not, the optics are not good and I question whether the timing of this breakfast was so important to have under the current climate. I am not for reopening everything right now. Covid is still out there in our town, neighborhoods and community. A gathering like this could have easily cause a spike if just one member is positive – especially given the fact that many of these attendees tend to attend many gatherings like this, photo ops etc.” she wrote.

One commenter stated that the visuals did not tell the story and that “rules are a bit more complex” when it comes to indoor gathering. He stated that it is not just about having a maximum of 25 people indoors. “The rules/guidelines actually get into things like, ‘8 people per 1,000 square feet’,” stated the poster who identified himself as a fundraiser and event planner.

“That said, banquet facilities (like Tekoa Country Club) fall into the category of restaurants/indoor dining which have very different restrictions/allowances. These include things like: no more than 6 people per table (from the picture it appears as though they were using 8 tops with 4 at each table so they actually went above and beyond the guidelines); additionally tables have to be 6 feet apart; service staff have to wear masks, etc., etc. How about we all have confidence that there are professionals in charge (at Tekoa and the Chamber) who are responsible for managing these details,” he wrote.

Requests for comment to Westfield Health Director Joseph Rouse, Tekoa Country Club and Neal were not returned at press time. The online version of this story will be updated as responses are received.