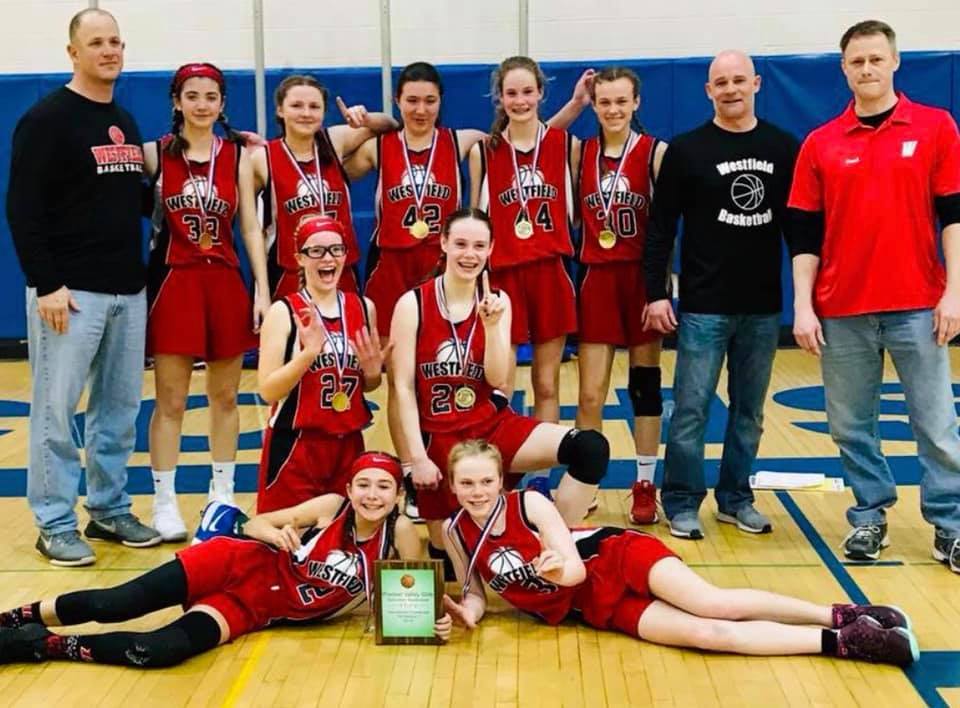 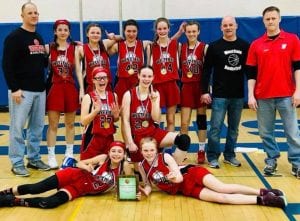 CHICOPEE –  Right now, the Westfield 7th-8th Grade Suburban girls basketball team is sitting on top of the world, or at the very least, the Pioneer Valley Division 1 circle of teams.
On Sunday, Westfield captured the 2018-19 Pioneer Valley Division 1 Championship with a 45-34 victory against Chicopee. The win marks back-to-back titles for the seventh graders, who captured the 5th-6th grade title last season.
Lindsey DeLand and Gianna Strange led Westfield with eight and seven points, respectively, to cap off a sensational season in front of a packed house at Chicopee Comprehensive High School.
Lexi Sanchez, Claire Griffith, Abigail Dorunda, and Morgan Fillion each finished with six points each for the Bombers, who led by just five at halftime but pulled away down the stretch in the second half. Ali LaPanne chipped in with four; Ava Pedersen had two.
The championship victory came on the heels of Thursday’s 41-22 semifinal upset of the top-ranked Tantasqua Warriors.
In that game, the underdog Bombers trailed at the half, 13-12, but went on an 9-0 run early in the second half with key baskets from LaPanne, DeLand, and Dorunda.
DeLand led a balanced attack with eight points; Sanchez added seven; LaPanne and Strange contributed six apiece; and Kenzie Raymond scored five.
It was the lowest point total of the season for the Warriors.