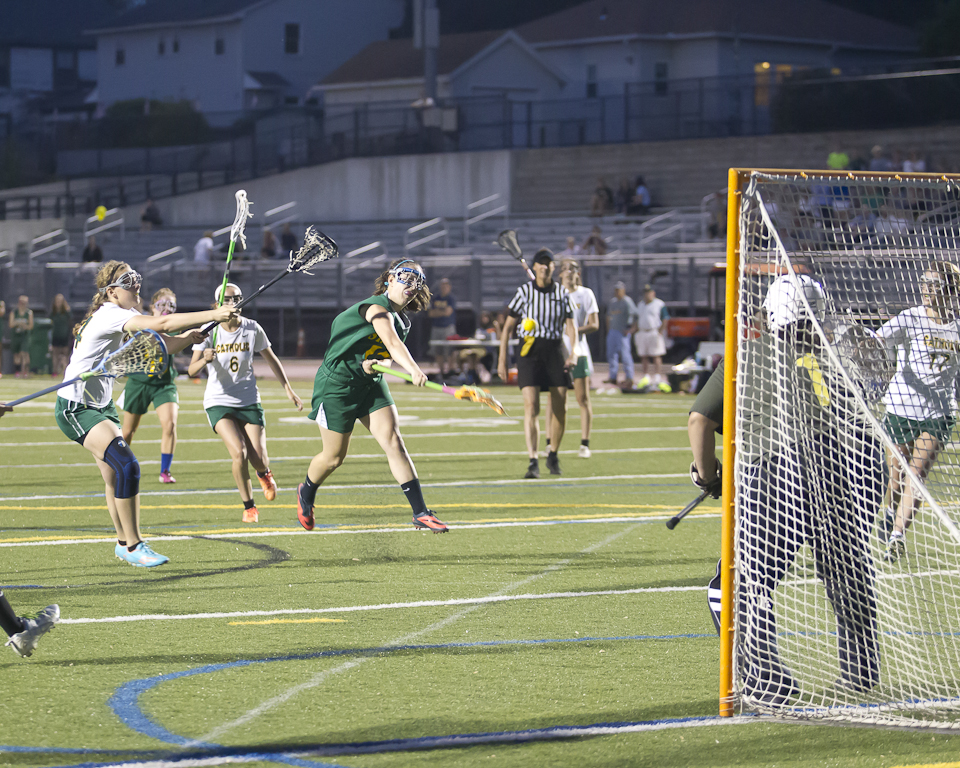 CHICOPEE – It may have been Holyoke Catholic’s senior night Tuesday at Chicopee Comprehensive High School, but all attention was focused on No. 17 in green and gold.
No. 17 is Lauren Chapdelaine, a senior forward for the Saint Mary’s High School girls’ lacrosse team, and the night belonged to her, regardless of the location or the outcome. 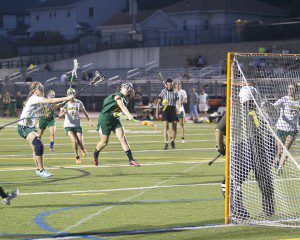 As has been the case for much of the season, Chapdelaine was the focus, the key central figure of the SMHS offense. The Gaels knew where she was at all times, double and triple-teaming her every time the Saints obtained offensive possession. The crowd knew where she was as well, erupting in cheers at the potential of Nos. 98, 99 and 100 coming with every catch. Her teammates knew where she was, trying to get her to 100 in any way possible.
“I’m very happy – I don’t know how else to put it,” said Chapdelaine. “I really didn’t think I was going to get it once there was a minute left, but it was a great feeling.” 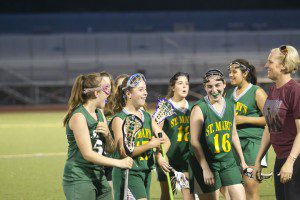 St. Mary’s Lauren Chapdelaine (17), front second from left, cracks a smile as she is congratulated by teammates after scoring her 100th career goal Tuesday night. (Photo by Jeff Hockenberry/www.jchphotos.com)

With one minute and 18 seconds remaining in the game and St. Mary’s down 8-6, Chapdelaine took the ball with a free shot to get the Saints within a goal. After being denied by the Holyoke Catholic goalie on several occasions since early in the first half, Chapdelaine calmly put away her third goal of the game, becoming the first Saint in program history to reach the milestone mark.
Pandemonium soon followed.
The crowd responded with an uproar. The Saint Mary’s bench jumped up and down. The team swarmed their new milestone-achieving teammate near the arc. Even the Saint’s goalie ran across the field to join in the celebrations.
“All season long, they’ve been working hard to help me get that 100th goal,” said Chapdelaine. “They’ve been nothing but amazing with trying to help me with it and I thank them so much for that. It was difficult, especially with their defenders targeting me, but I was pushing through it because this was a goal that I’ve had for so long. I didn’t want to give up on it, especially in a game where I knew I could get it.” 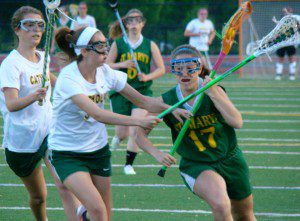 The Gaels’ girls lacrosse team (2-15) may have earned its second win of the season in a back-and-forth 8-7 victory, but the visiting Saints of Saint Mary’s High School continued cheering for their teammate. The scoreboard said a loss, but the team celebrated quite the victory nonetheless.
“She’s a been a great player since seventh grade,” said St. Mary’s head coach Dave Watson. “I’m not really surprised that she got her milestone, but they knew she was going after the 100 points, so they started double and triple-teaming her, but she still got it done. The whole team wanted this to happen and it worked out in the end, so that’s really neat.”

Chapdelaine entered Tuesday’s matchup with 97 career goals, three away from the 100-goal mark. She looked on pace to break that quickly, scoring the first goal of the game 46 seconds into the game, putting her team up 1-0. After Holyoke Catholic went up 3-1, Chapdelaine scored goal No. 99 with 4:47 remaining in the half, when her deflected shot trickled past the goalie and snuck across the line, putting the Saints within a goal.
St. Mary’s (3-10) travels to Belchertown for a showdown with the Belchertown Orioles Wednesday afternoon, as well as a chance for Chapdelaine to extend her program record.