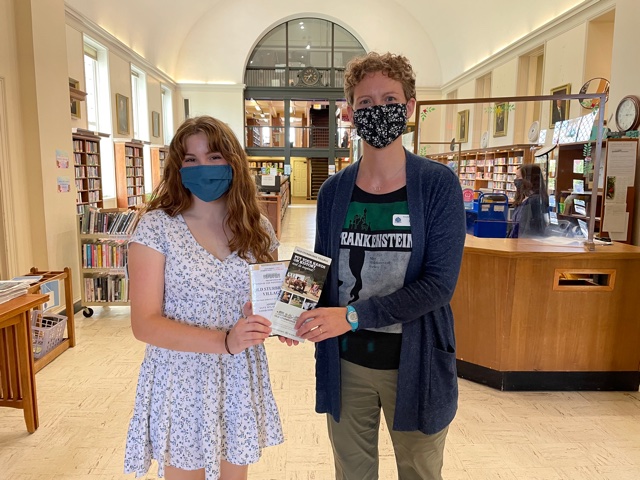 WESTFIELD – Since Emma Avery was 4, she has been fascinated by the history – and especially the baking aspect – of what life was like in early 19th century New England as depicted at Old Sturbridge Village.

“Since I was little I always enjoyed visiting Old Sturbridge Village with my grandmother,” said Avery, who is now 15 and will be entering Westfield High School in the fall.

Avery noted that her trips to the village have always included spring excursions to see the baby animals and to enjoy the candlelight tours during the holiday season.

“I’ve always been interested in baking so I also enjoy visiting the village homes to see how meals were prepared,” she said. 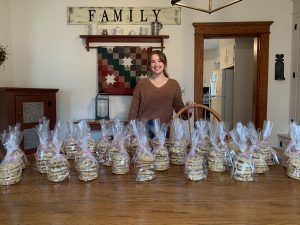 Emma Avery – with help from her mother and grandmother – baked 300 large chocolate chip cookies for a fundraiser that allowed her to purchase an Old Sturbridge Village museum pass for the Westfield Athenaeum. (KIM AVERY PHOTO)

Over the years, the Avery family has used museum passes offered through the Westfield Athenaeum to visit Old Sturbridge Village as well as the Springfield Museums.

Since Avery’s mother, Kim, is a Westfield Public Schools teacher and has summers off, the Athenaeum’s museum passes have always been a welcome way to explore new areas in the region.

With some free time on Avery’s schedule, she recently enlisted the help of her mother and grandmother, Dianne Fuller of Westfield, to assist her with a project to give back to the community — baking cookies to raise money to purchase a museum pass to Old Sturbridge Village.

“We used about 9.5 pounds of flour and six pounds of sugar, and about 11 pounds of chocolate chips,” said Avery, noting she is known by friends and family for her chocolate chip cookie recipe.

“I found the recipe on a website,” said Avery, noting she sold six cookies in each pack for $7.

Avery took orders by email and posted a flyer on her mother’s Facebook page.

“We sold a lot of cookies to teachers,” she said.

When all of the packs were sold, Avery had raised $485 that allowed her to purchase the museum pass for the Athenaeum.

“Everyone who bought cookies were generous with their donations,” said Avery, noting she also plans to conduct the cookie fundraiser for at least the next two years.

“We are extremely excited that Emma Avery raised money for a Sturbridge Village pass, because it is a wonderful pass to a fantastic museum, but it is also one of the more expensive museum passes in the area,” said Kelsey Socha, head of adult services at the Athenaeum. 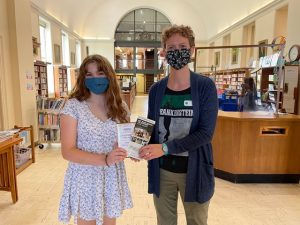 Socha noted that the Friends of the Westfield Athenaeum pay for most of the museum passes.

“They voted to purchase a requested list of museum passes in their July meeting, and we’ve since ordered the passes that they voted to renew,” said Socha. “We are waiting for the physical passes to come from the museums before listing them on our website, but they should be coming in the very near future.”

Current museum passes available for library patrons to use include the USS Constitution Museum (free admission for up to nine guests), the Sterling and Francine Clark Art Institute (one free adult admission), and the Annual Parks Pass (free parking for one vehicle at more than 50 state parks).

“We did not renew passes sooner in the year because many of the museums that we work with were closed or open extremely limited hours, and many were also not accepting library passes,” said Socha, adding, “Some museums have discontinued their library pass programs, at least in the short-term.”

“This means families planning trips can book a pass ahead of time, and make the appropriate arrangements,” said Socha. “Museum pass bookings are for one day, but given enough notice, we are sometimes able to allow passes to be taken for two days.”

Socha said cardholders from other towns cannot reserve passes in advance, but they can check out a pass the day-of if it is not already reserved.

“You do need a library card in order to borrow museum passes, and there are overdue fines if they are returned late,” said Socha.

Socha recommends that persons interested in museum passes should check the website for updates, can call the reference desk at (413) 568-7833, ext. 104, or stop in.

“We’re very grateful to Emma for deciding to fundraise for this cause, and we are excited that this pass will allow greater access to learning and exploration for the Westfield community,” said Socha.