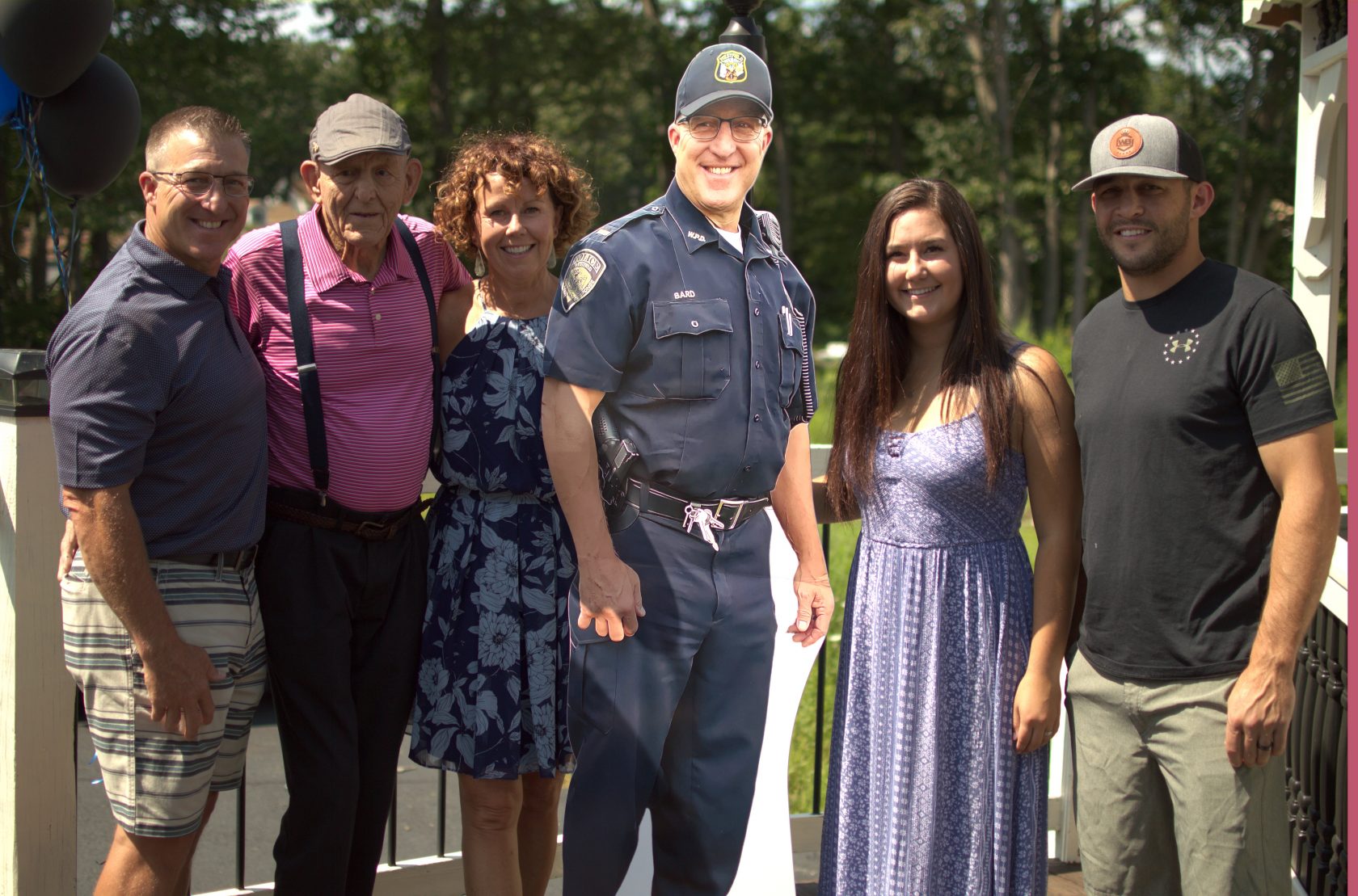 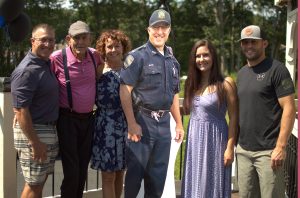 From left: Retired Police Lieutenant Kevin Bard, his father Francis Bard, his wife Joelle, a cardboard cutout of Kevin, his stepdaughter Victoria, and his son Justin at Kevin’s retirement party at the Brass Rail in Southwick. (PETER CURRIER/THE WESTFIELD NEWS)

Bard first entered the department in February 1989, as a reserve officer, and retired July 9, 2021, as the head of the Community Service Unit (CSU).

Bard said that his first great accomplishment was simply being hired by the Westfield Police Commission. His other major career accomplishments, he said, were his involvement in Westfield’s different community policing programs.

“The vast majority of my career has been in community policing. That’s where I feel I really thrived,” said Bard, “It got me outside dealing with citizens, dealing with every walk of life.”

In 1999 he joined the department’s new Special Response Team, which is a group of officers who regularly trained for more serious policing situations that required a more armed response.

Bard was also a member of the Coalition for Outreach, Recovery and Education (CORE) of Greater Westfield, a team consisting of local leaders and police officers that focuses on helping overdose victims and trying to prevent future drug overdose deaths.

In the same vein, he was also the Coordinator of the Drug Addiction Response Team (DART), which follows up with recent overdose victims to provide them with resources to help them recover from their addiction.

Bard’s decision to retire was not an easy one, he said. He was thinking about taking the captain’s exam to continue to move up in the police department. However, his father became ill, and he decided that the exams would be far too daunting of a task to do while also taking care of his family.

“There is a lot of preparation, a lot of time, and a lot of money that is put forward to pass these exams,” said Bard.

He said he also wanted to allow other officers to be able to grow and move up in the department.

“I wanted to give other people in the department the opportunity to achieve the successes I’ve achieved in my career,” said Bard. “Throughout my career, I’ve had the city of Westfield’s and Westfield Police Department’s best interests at heart.”

He said that his retirement plans involve travelling throughout the country and world with his family and to spend more time with his children and grandchildren.

“I also want to hone my golfing skills,” said Bard.