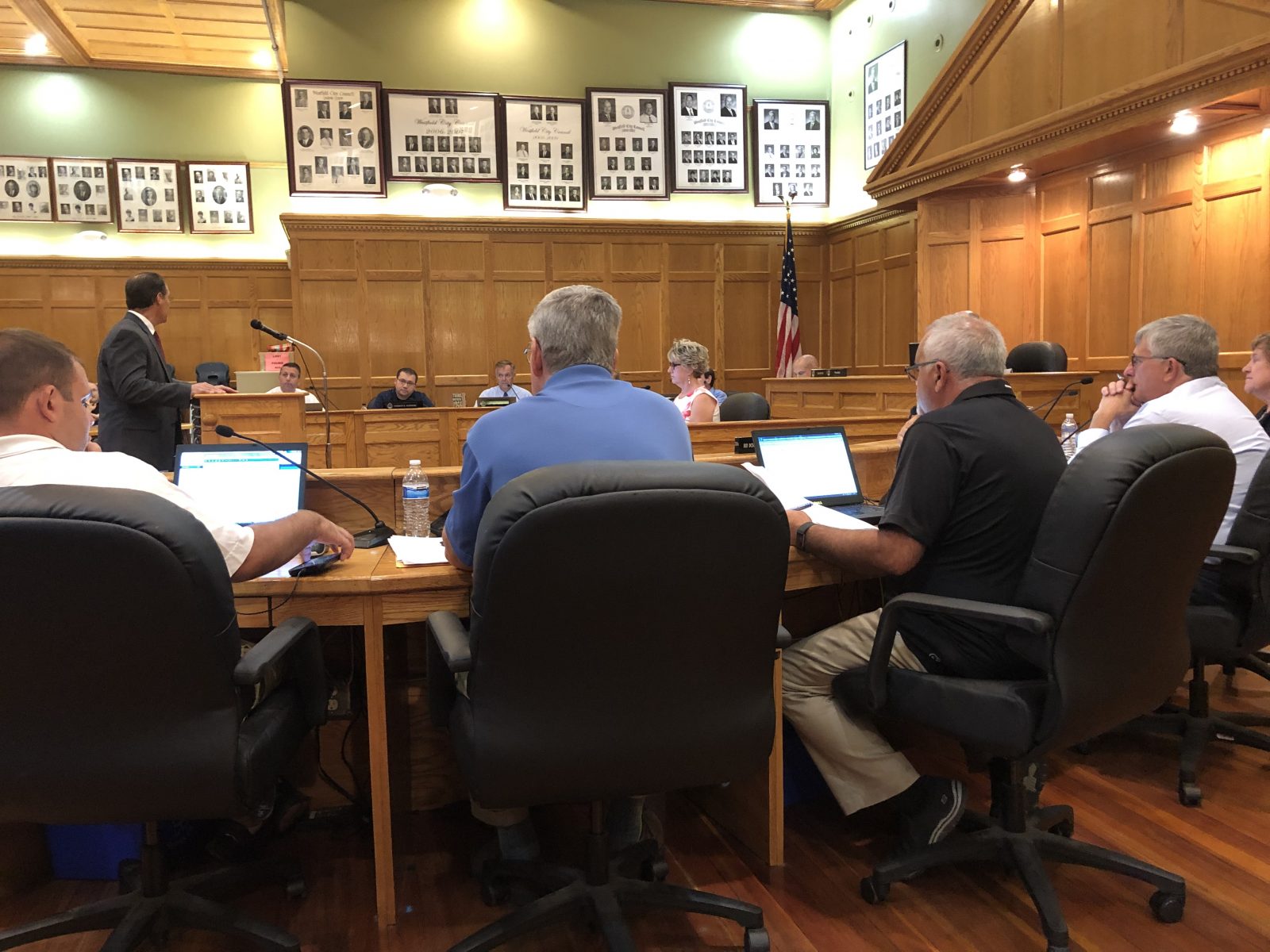 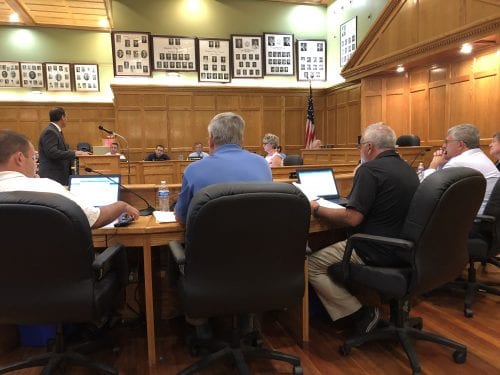 WG&E General Manager Tony Contrino addresses the Council about the IGA between the City and WG&E. (Photo by Amy Porter)

WESTFIELD – The City Council continued its trend of lengthy meetings on Thursday, this time beginning at 7 p.m. and ending at midnight.
Public participation covered a wide range of subjects, from Robert Pearson asking why Cross Street Playground doesn’t have any playground equipment yet, to Barbara Rokus asking for an air monitor for the Southampton Road School before further development takes place there. Amy Beluzo asked for an update on the GIS analysis as to whether Cabot Road could site a well, and Tom Smith shared his view that the City Council is vested with the power to manage city affairs.
Brian Hoose also welcomed Michael Dobbs as managing editor of The Westfield News, and said they go back a long way.
Council President Ralph J. Figy then asked for a motion to take out of order the planned public hearing on Baystate Noble’s Hospital Zone. A motion was made to withdraw Baystate’s petition without prejudice, after a request received from Robert A. Levesque of R.A. Levesque Associates, representing the hospital.
Levesque said the request was withdrawn due to a petition being circulated that “needs to be acted upon,” and would have changed the application enough to require coming back before the City Council.
“We would not want to waste anybody’s time,” Levesque said. He said the hospital and members of the community had met a few times, and the hospital thought they were close in terms of a plan, but the petition showed otherwise.
“Generally speaking, they wanted more restrictive controls related to site plan approvals and special permit granting authority,” Levesque said after the application was withdrawn.
“The neighborhood likes having the hospital, and wants it to be able to flourish and grow,” said Bridget Matthews-Kane of Court Street, who had circulated the petition. She said what residents want is protection for zone changes, requiring the hospital to seek special permits instead of site plan approval. The residents also want most major changes to go in front of the City Council, and minor ones before the Planning Board.
Matthews-Kane said residents should be able to stop something that wouldn’t be good for the city.
In other business, the City Council approved for immediate consideration almost $7 million in FAA grants for the Westfield Barnes Airport. The city’s share will be 5% for the grants, which will pay for design, construction and reconstruction of runways at the airport.
Also approved for immediate consideration was an intergovernmental agreement (IGA) between the City of Westfield and Westfield Gas & Electric for a FCC Contact American Fund II grant. Figy said the IGA will allow an account to be set up in the city, to allow WG&E to receive the grant of $10 million over 8 to 10 years, for broadband connections to hilltown communities working with them.
“What is the benefit to Westfield? Why are we doing something to benefit other communities,” asked At-large Councilor Andrew K. Surprise, the lone dissenting vote for the agreement.
WG&E General Manager Anthony Contrino came forward to explain that one of the major benefits is that the arrangement strengthens WG&E.

“We’ve been working with these towns and have built a good relationship with them. Ultimately, we hope that these towns will choose us as their internet provider,” Contrino said, adding, “We’re not contributing anything financially to these towns. We’re helping to manage their broadband.”
“This opportunity will strengthen the WG&E, Whip City Fiber and all the services they provide to the City,” said At-large Councilor Brent B. Bean, II.
The majority of the marathon meeting session occurred during Bean’s Finance Committee report, which recommended 3-0 approval of the supplemental budget presented by Mayor Brian P. Sullivan at the committee’s Tuesday’s meeting. Sullivan had argued at the committee meeting, on which At-large Councilors Daniel Allie and John J. Beltrandi, III also serve, that the majority, but not all, of the items cut were statutory or contractual obligations of the city, and was asking for the restoration of $728,471 to the budget.
Bean said there were 30 items for the Council to review and vote on.
For the first item, a $2,500 cut to the mayor’s salary, Bean explained that the salary was set by city ordinance, which would have to first be changed by the Council.
Flaherty responded that the cut was not to the mayor’s salary, but to full-time employees in his office, which the mayor had chosen to apply to his own salary. He then said that regarding the mstatements that the Council did not have the right to cut, “We have the power to cut any line item in the budget,” Flaherty said, adding that he would be arguing all of the cuts to be presented.
He also said while it was true that many of the items were contractual or statutory obligations that the city will be required to pay, the mayor has the authority to transfer funds between accounts, and to come back to the Council for transfers from free cash and stabilization, if needed.
Flaherty proceeded as he said he would, arguing that the Council had the right to make every single cut as every item was introduced. He was joined in the argument and in voting down almost every single item by Allie, Matthew Emmershy, Nicholas J. Morganelli, Jr. and Surprise.
On some items, the argument prevailed as several other councilors joined the group in voting no. At the end of the more than two-hour session, $316,849 out of the request of $728,471 was restored to the mayor’s budget.
There was also a split decision on the votes of the two largest items. The request for restoration of $250,000 from contributory retirement, which the mayor had said is set by the Public Employment Retirement Administration Commission (PERAC), and contractually obligated, went in his favor, and was one of the only items that Flaherty supported restoring.
“The Council has the right to cut this line item, and the city has to pay this obligation,” Flaherty said, adding the cut was made to send a message to the Pension Board regarding the 5.8% increase in the request. He then asked for 100% support of the restoration around the table. He didn’t get it, with Bean and Emmershy voting against it.
The single largest request for restoration of $271,000 for the city contribution for health insurance did not get the same support. “Again, this is one we are fully entitled to cut,” Flaherty said, adding the city has $10 million in its health insurance account, which he said is a much bigger buffer than other cities and town. The vote was 3-10 against restoring the health insurance account.