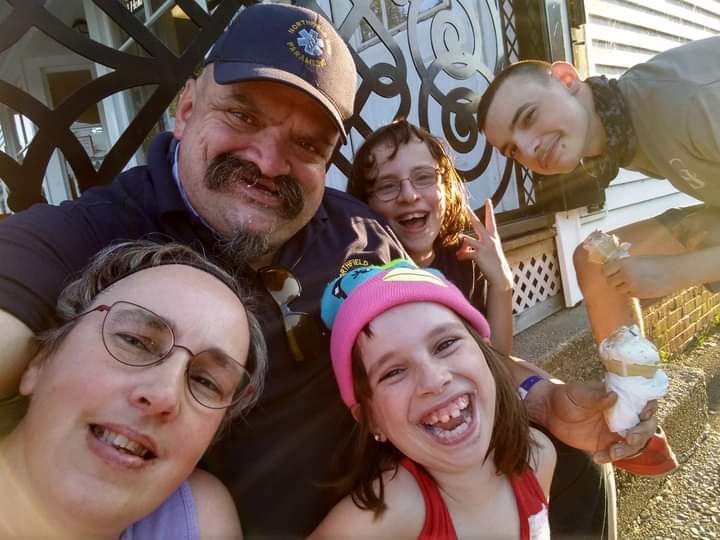 SOUTHWICK-Erik Davidson has lived by the motto of giving back to the community and in recent weeks that love has been returned tenfold as he recuperates from first- and second-degree burns from an accident at his home.

Davidson, a paramedic and public education coordinator with Northfield EMS, is also the co-founder with his wife Jo-Ann of the Start Em Early Foundation which donates “sensory sacks” to city and town departments that respond to medical or traumatic situations. 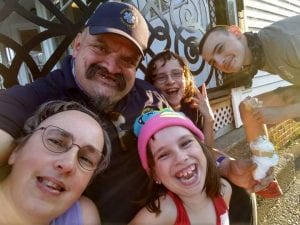 Earlier this year, the couple started a Go Fund Me page to bring to light the project of autism awareness to first responders.

While Davidson recuperates at home from a fire incident that occurred during his daughter’s graduation party in early August, he said he has been overwhelmed by the generosity and thoughtfulness of area residents from far and near. He was treated for his burns at the Connecticut Burn Center at Bridgeport Hospital.

Davidson said he was cooking at the grill when an issue with lighter fluid started a fire in the grass and when he tried to stomp it out his sneakers caught on fire. He suffered second-degree burns on his ankles and first-degree burns on the lower extremity areas.

Since his family lives in Southwick, he opted to be treated in Bridgeport rather than the Boston area.

“Each burn center was the same distance but Bridgeport was easier for my wife to get to,” he said.

“I am still recuperating and have no official date to return to work,” said Davidson, adding he is hopeful he will be well enough to return to his per diem paramedic job in early October.

Mark Fortier, chief of emergency medical services for the town of Northfield, said Davidson has a “lengthy recovery” ahead.

“He and his family are struggling financially as his employment does not have benefits most jobs offer,” said Fortier in a Facebook post. “Anyone who has benefited from his involvement with Northfield EMS and the Start Em Early Foundation know he selflessly gives of himself to the citizens and to fire/EMS as he and his foundation have donated autism sensory bags to all ambulance services in Franklin County and beyond.”

When reached by phone, Fortier noted the Facebook post has “really taken off” and the Northfield region has been “tremendously supportive” in helping the family.

“We have seen checks from $5 to $500 come in,” said Fortier, adding that Hillside Pizza in Bernardston had a special pizza night recently to raise funds for the family, and Pete’s Tire Barn in Orange donated four new tires for Davidson’s car.

A local meal train has also been started which welcomes individuals to select a date and provide a meal delivered to the family. For more details, visit www.mealtrain.com and search for “Meal Train for Erik Davidson.” A note on the website “recommends” all meal trains have “no contact” delivery so the Davidsons have set up a table in front of their 26 Point Grove Road home for no contact drop off. Also, for persons wanting to provide a meal, one notation on the meal train website indicates one adult has a dairy allergy and two individuals are diabetics.

While Davidson is recuperating, he said the work of the foundation continues with Jo-Ann taking more of a lead role at this time. Jo-Ann also works as a special education teacher in the Chicopee school system.

“We are not taking a break from taking orders for sensory sacks,” said Davidson, adding that the training for the sensory sacks is on hold until he can stand up and conduct classes. “We are also receiving support from the OT Department at Springfield College and from the Primum Non Nocere Foundation and we are very grateful.”

For persons who wish to make a financial contribution, Fortier said, “any size contribution will make a world of difference for the family.” Checks made payable to Erik Davidson can be mailed to Northfield EMS, 41 Main St., Northfield MA 01360.

To leave a meal for the family on a particular night, visit www.mealtrain.com for complete details.