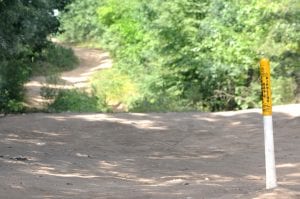 A marker warning of an underground high-pressure gas pipeline is prominently posted on property cleared for the Tennessee Gas Pipeline which has become a popular site to ride recreational vehicles in the city. (CARL E. HARTDEGEN PHOTO)

WESTFIELD – On a typical summer weekend, dozens of dirt-bikers and all-terrain-vehicle enthusiasts come to the city to ride – without permission – on the private property of Barnes Municipal Airport, Tennessee Valley Gas Pipeline and others in the area north of the turnpike and abutting the airport.

Property cleared for the pipeline creates a trail well suited to off-road recreational vehicles and riders have also created other trails throughout the heavily wooded area..
Westfield Police Chief Lawrence Valliere said he grew up on East Mountain Road and knows from personal experience of the allure of the area for off-road vehicle fans.

“It’s a lot of fun” he said and acknowledged that the area “is a great spot to go riding on ATVs” but said “they just dig up the area, it creates erosion.”
Additionally, the hoards of riders have left the area littered with refuse – plastic water bottles, motor oil bottles, discarded clothing and even motorcycle tires and larger items. Also, Valliere said, evidence of persons camping in the area raises concerns about fire in the heavily wooded area.
The area is reached by a gravel road which continues from Sergeant T.M. Dion Way, parallel to the turnpike, and crosses the pipeline which extends almost due north, largely parallel to East Mountain Road. On a recent Saturday, police were alerted by personnel at the Fire Department sub-station on Southampton Road of a procession of box trucks and vehicles with trailers carrying off-road vehicles which had turned on to Dion Way, apparently en route to the pipe line area.
Officer Efrain Luna was the first responding officer and reports he found several box trucks and vehicles with trailers parked along the gravel road and at the pipeline where he found “70-80 people with pop up tents and grills set up for picnics.” He reports also that “there were several recreational vehicles with riders all decked out in their off road suits tearing up the property while other were unloading their machines.” 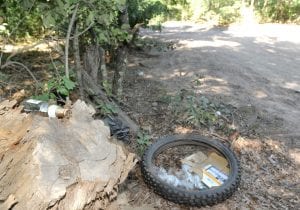 Recreational vehicle enthusiasts who come to the city to ride their machines in the area of the Tennessee Gas Pipeline have left the area littered with beer bottles, motor oil containers and even the occasional motorcycle tire. (CARL E. HARTDEGEN PHOTO)

Luna reports that, after he arrived, most of the crowd packed up their picnics and vehicles and left the pipeline area.
Later in the day, Officer Steven Carrington returned to the area to find “about 30 motorcycles and quads”, most of which fled.
On Sunday, Luna positioned his cruiser near the airport runway and stopped incoming vehicles to advise operators that they were trespassing.
He reports he spoke with a West Springfield resident who said that she had been planning to set up for a day of riding quads with a group which had organized a recreational vehicle ride via a social media site (Facebook) on the property. Luna advised the woman that the riders have damaged property owned by the city and the pipeline and suggested that she get in touch with others involved to tell them to stay away permanently.
Luna later stopped a Springfield man arriving with a quad in his pickup truck who said that he had ridden in the area the week before without issues and had not damaged any property. Luna told him “by riding and tearing up the area along the airport fence line and water department land along with the Tennessee Gas pipeline he is partially involved for the damage caused.”
The man said he would leave and call his brother, who he had planned to meet, and tell him not to come. Others arriving were similarly advised and left the area.
Of the 23 vehicles documented at or approaching the pipeline on that Saturday and Sunday, none were registered in Westfield. Sixteen were registered at Springfield addresses, two were owned by Holyoke residents, two by Chicopee residents and one was registered in Hartford, Conn.
Valliere said that although social media users may have brought riders to the city “they can end it too.” He pointed out that users of social web sites can quickly get the word out to others that they should no longer expect to ride in the area.
But Valliere also said that city police would also take steps to “end it”.
He said that Capt. Jerome Pitoniak has “a meeting set up with airport, the air guard and the turnpike” to coordinate action to keep off road operators off the property. 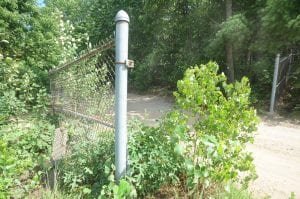 A gate which once limited access to the Tennessee Gas Pipeline property may be rehabilitated to prevent off-road vehicle operators from riding their machines in the area. (CARL E. HARTDEGEN PHOTO)

Currently a gate which once restricted access is overgrown and unusable but he hopes that the stakeholders will authorize its replacement and use. ”They’re trailering everything (off road machines) in”, he said, so a gate would be effective since, unlike ATVs which could easily go around a closed gate, the box trucks and trailers would not be able to bypass a gate with impunity.
In the meantime, Valliere said “we’re just going make it so they can’t get in there.”
Pitoniak said, on weekends an officer will be stationed on the gravel road to turn away riders. The area is not presently posted with ‘No trespassing’ signs so infractions cannot be enforced for pedestrians but Pitoniak said ‘trespassing with a motor vehicle’ is covered by a different law and can be enforced by police even without posted warnings. Pitoniak said that vehicular trespassers don’t need to be warned by signage, “they just have to know that they’re not on their own property.”
Valliere also said that he is in the process of reviving the department’s ATV patrol and is working to train officers so city police can both patrol the area more effectively and also be available to respond to mutual aid requests to patrol areas around reservoirs in Granville and Montgomery. He said that Environmental Police have scheduled training sessions for Southwick police officers and he has made arrangements for some city officers to attend those classes.