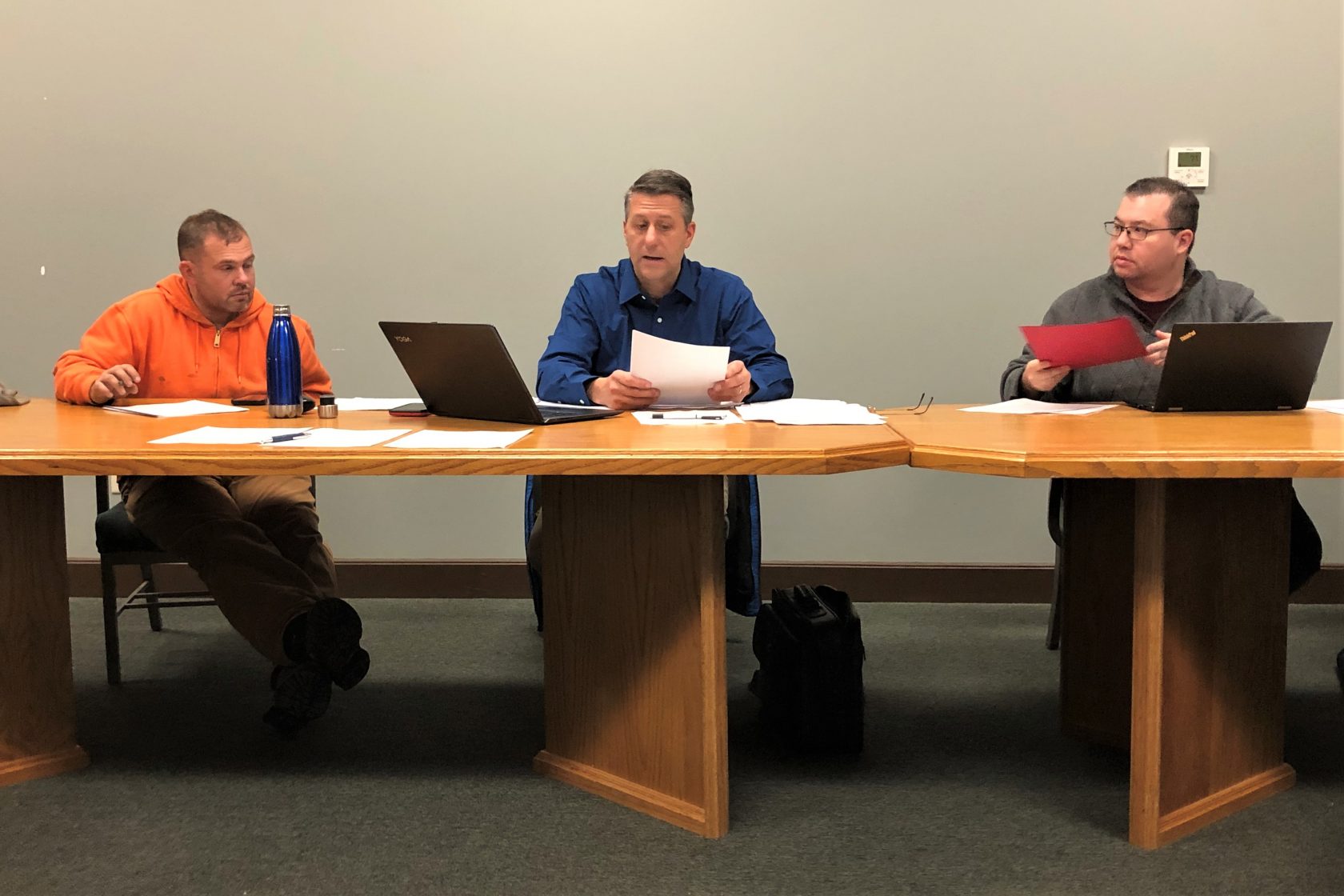 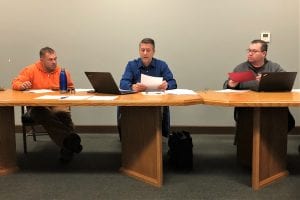 WESTFIELD -The Zoning, Planning and Development committee, chaired by At-large Councilor Nicholas J. Morganelli, Jr. with Councilors Matt Emmershy and Andrew K. Surprise, met Dec. 4 to move through some items that have been in the City Council pipeline for several months.
The zone change at 62 School St. from Business A to the Commercial Office Retail Enterprise (CORE) district was one such item. Robert Levesque of R. Levesque Associates, on behalf of Patrick Berry and WNG Holding, presented the zone change, which has already been through the Planning Board and a public hearing, at which Levesque disclosed that he has a purchase of sale agreement on the parcel comprised of a parking lot and building.
At the start of the ZPD meeting, At-large Councilor John J. Beltrandi, III spoke on behalf of the proposed zone change, saying that it will help the whole area, and is an opportunity for development and redevelopment.
Morganelli reviewed the request, stating there will be no significant impact to the neighborhood because it would extend the existing zoning from the abutting building, 40 School St., owned by Levesque.
Levesque said his business currently uses the parking lot, and the CORE district rezoning would allow for improvements and potential opportunities to rehabilitate the building in the future, although he said the initial plans are to utilize the property as it is.
“It does make sense in that area. The building is currently non-conforming to Business A, and this would make it conforming to CORE,” Berry added.
Morganelli said he saw no issues with the plan, and the committee agreed, giving a 3-0 recommendation to the Council.
City Planner Jay Vinskey said the next item, a zoning bylaw amendment to allow for the creation of “flag lots,” lots not meeting frontage requirements if they meet certain criteria, would time out in January.
Beltrandi, who sponsored the motion, recommended it be removed from committee and resubmitted. ZPD voted 3-0 to remove without action.
Morganelli said regarding the review of regulations for Sober Living Homes, their hands were tied. “With state laws, there is not a lot we can do to restrict where people live in a city,” he said, adding that the city’s Law Department concurred.
Surprise referred to an article he brought in about Fitchburg winning an appeal in court. “Federal courts are saying you are able to make zoning regulations,” he said, adding the key is the city cannot discriminate against a protected class, but must apply regulations to all properties.
“It can be done. Whether anyone has the stomach to do it is another matter,” said Emmershy.
Another agenda item regarding an arts and zoning overlay district for downtown Westfield was removed from the committee with no action. Surprise said the city’s development director Peter J. Miller was working on the project.
The Planning Board’s proposal, made by John Bowen, to strengthen marijuana establishment regulations by requiring a special permit within 500-feet of a park, was discussed at greater length.
Morganelli said he would have an issue if some of the small properties labelled as parks, such as some memorial areas, would be included.

“Going forward, one of the things we could do better is to define what a park is,” he said.
Bowen said the protection he was looking for is in parks which attract kids, such as recreational areas. He also said the amendment would trigger a special permit, but the distinction on type of park could be made in the review.
“I agree with the Planning Board’s concern over proximity to a public or private recreation area,” Levesque said, adding that a proposal he had brought forward for a cultivation facility that bordered a soccer field was voted down for that reason.
Emmershy said he could see the regulation more for growing facilities, than for retail facilities.

“We’re missing the boat here with this. We’ve made things incredibly difficult for businesses to open up,” he said.
Morganelli called on Morris Partee of Holyoke, who has expressed interest in a marijuana business in Westfield, and who brought with him a list of all of the different types of marijuana businesses, in addition to retail and growing.
“The funny thing about the park is I almost see better (staying) 500 feet from retail, because you don’t want people to go to the park on a nice day and consume it,” Partee said.
“There’s no smoking in a park,” Emmershy responded.
Vinskey said marijuana facilities are allowed in three zones in the city; Industrial A, Business B and Industrial Park. He said retailers are only allowed in Industrial A. He said Westfield’s ordinances are quite permissive, allowing growing operations by right in those zones. “They’re either retail or not retail. A warehouse is treated like any other warehouse,” he said.
He also asked Partee if every business in Holyoke regarding marijuana is by special permit, to which Partee said yes, by the city council.
“This is going to time out. We need to vote on this tonight,” Morganelli said. Surprise made a motion to refer it to the City Council with no recommendation, which Emmershy seconded. The vote was 2 to 1, with Morganelli voting against making no recommendation.
A review of the overall marijuana zoning ordinances remains in committee.