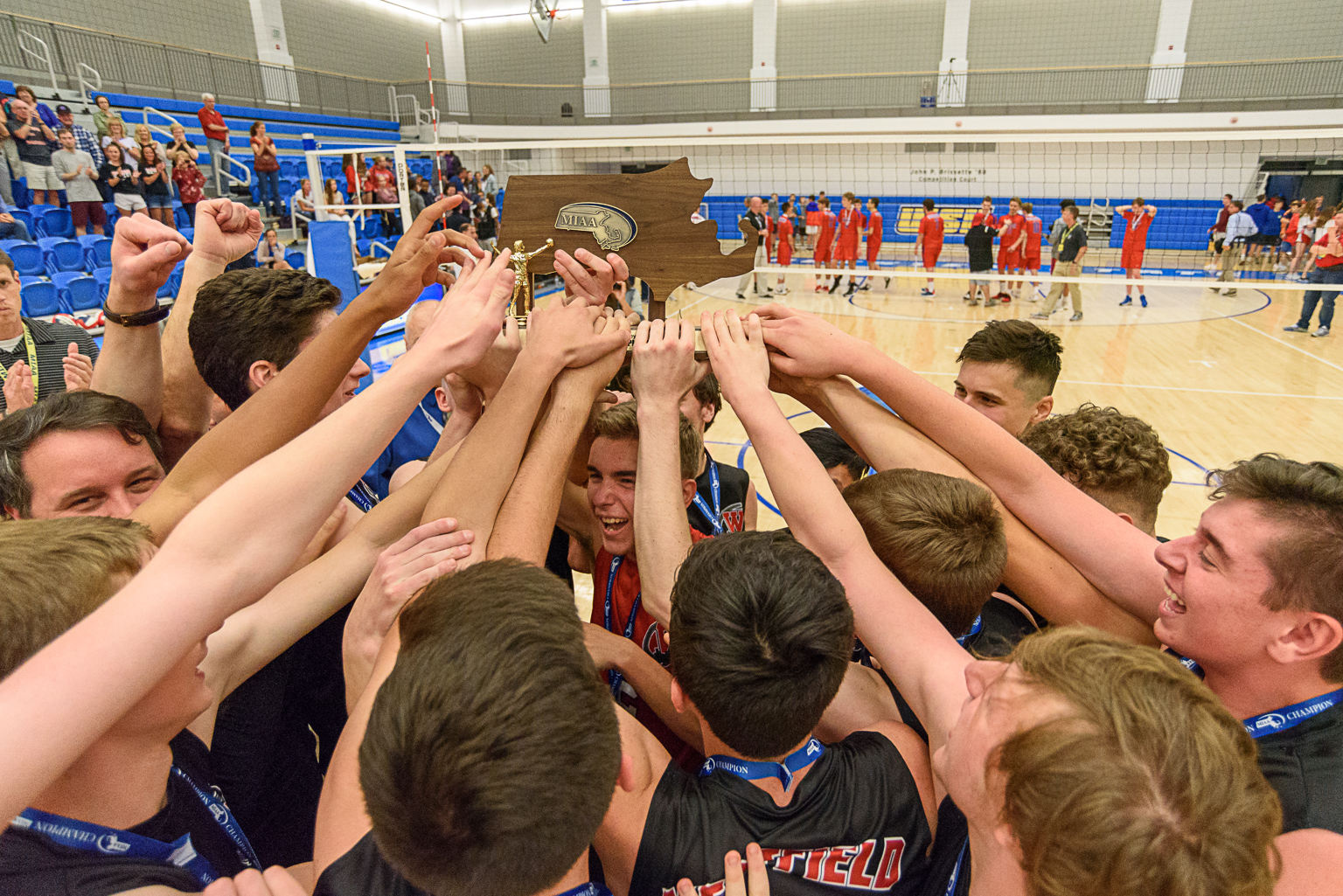 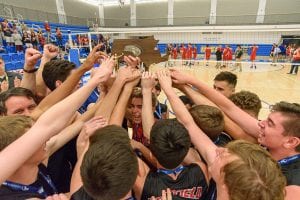 It’s all smiles for the Westfield High School boys volleyball team after 3-peating in 2019. The Bombers run at a fourth straight state title and sixth consecutive Western Massachusetts championship were halted due to the coronavirus outbreak. (THE WESTFIELD NEWS FILE PHOTO)

WESTFIELD – One local high sports team has finally met its match.
With the Massachusetts Interscholastic Athletic Association’s decision to cancel the high school sports spring season likely expected by week’s end, the Westfield High School boys volleyball team is left to ponder what could have been.
This decision comes on the heels of Massachusetts Gov. Charlie Baker’s announcement Tuesday to cancel the remainder of the school year in the state.
“We’ve been trending towards this,” said Westfield High School boys volleyball head coach Tyler Wingate, who was entering his 12th season with the team as the coronavirus outbreak shut down practices before they ever began. “I’ve been trying to prepare myself, understanding the severity and reality of the decision.”
Wingate agreed that “it is the right decision, but it doesn’t make it any easier,” and also went on to add that “it’s a tough spot for, not only the seniors, but for the whole group of guys.”
Westfield was expected to contend for a sixth straight Western Massachusetts Division 1 championship trophy and record fourth consecutive state title. No other boys volleyball team in the state of Massachusetts has ever done that.
“You can never really know what is going to happen,” Wingate said, “but myself and the coaching staff felt good about what we were going to put out competitively. …Without a doubt we felt good about the guys coming back and guys filling new roles. Unfortunately we are not going to be able to give it a go with this group. It’s back to square one.”
Two huge contributors from last year’s run, senior James Pavlyuk and Eric Yurtuc, were expected to join fellow seniors Riley Coughlin, R.J. Piper, and Rabin Gurung, and others who will now be sidelined for the 2020 season.
The Bombers head coach said a 15-, 16-, or 17-win season was well within the grasp of this year’s team.
“They’re going to miss out on their development; we’re going to miss out on putting a new group together to make a run at it,” coach Wingate said. “I know (a championship) is not guaranteed. It takes some work; it takes some luck. But not having a chance to go for that is disappointing.”
The cancellation of the 2020 season is also exacerbated by the fact that 2021 will be the last year that high school student-athletes in the western part of the state will be able to compete for a sectional championship as Massachusetts high school sports turns to a state-only tournament format similar to March Madness college hoops tourneys.
“It seems to mean more for us in the west because we don’t often compete for state championships in other sports,” Wingate said. “There’s a lot of tradition and history.”
Wingate, who has been a physical education teacher at the school for four years running, said his heart goes out to all of the school’s seniors.
“I know most of the seniors at the high school who are involved with athletics,” Wingate said. “This one really hits home, not only for the guys on our team but all the seniors across the city and across the area. …For them not to have the opportunity to not only finish out their sports seasons, their academic career and events (like proms and graduations), it’s something they’re not going to get back unfortunately.”
Much like bouncing back from a loss in a game, the Bombers head coach feels the graduating class of 2020 will rebound in a big, big way.
“This was a really special group,” he said. “They’re going to do some really great things in the future. It doesn’t mean they will be forgotten. They will be celebrated in one way or another.”