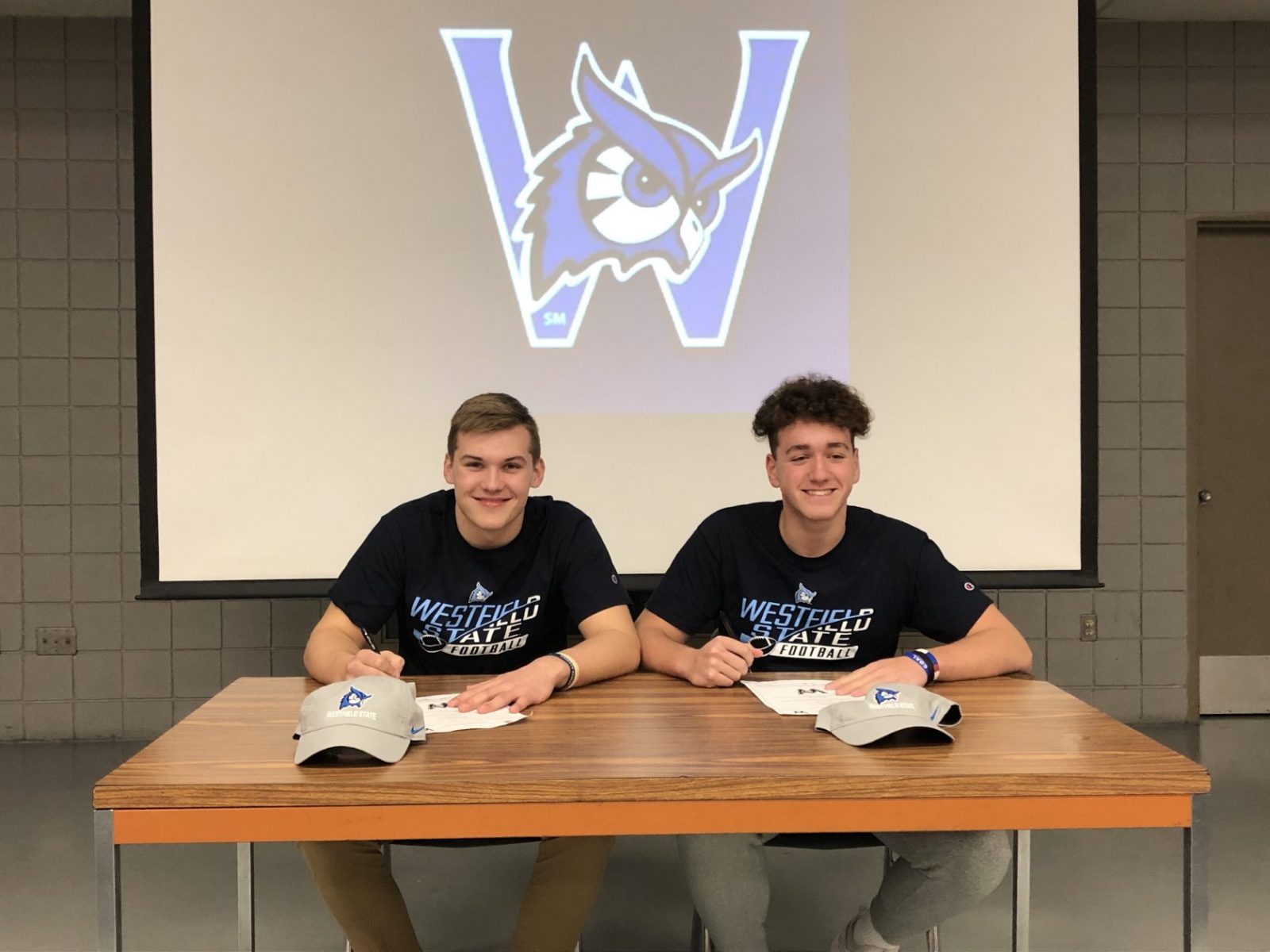 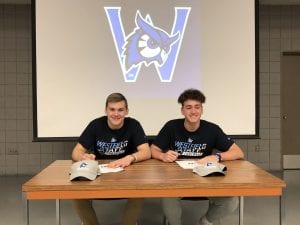 WESTFIELD – Westfield High School senior football players Mason Collingwood and Riley Coughlin recently unveiled their plans to attend Westfield State University this fall.
The two Bombers senior captains announced their plans on “signing day” just prior to the coronavirus outbreak.
“Both players are obviously very good leaders,” Westfield High School football head coach Rob Parent said in describing the future Owls. “Mason and Riley both started as freshmen. It’s a testament to their hard work and talent. I have high hopes for both of these guys.”
Coughlin and Collingwood were instrumental in Westfield’s successful run over the course of their high school careers, nearly propelling the Bombers to their fourth straight seven-win season. Only a pair of losses to Western Massachusetts runners-up Minnechaug – once in the Western Mass. semifinals and once on Thanksgiving Day – stopped them short of their goal.
While Coughlin made his impact felt as a hybrid linebacker-defensive end for the Westfield Bombers, Collingwood caught on as a tight end. 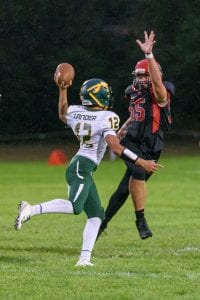 Collingwood said one of the fondest moments of his high school career came in a 2019 contest against Longmeadow when he caught the game-winning touchdown in triple overtime. His other memorable moment came during his freshman season, kicking three onside kicks that were successfully recovered by his teammates to help spur an upset on the road against the Central Golden Eagles, the Bombers first win over their mighty foe in decades.
While a knee injury cut short Coughlin’s freshman season, he proved to be a very dynamic student-athlete, displaying athleticism not only on the football field but as a basketball player as well.
Collingwood’s baseball season has been put on hold due to the coronavirus. Instead, he has been working with his father, doing cardio, and keeping the best workout regimen he possibly can.
“(Westfield High School baseball) coach (Mike) Kennedy had high expectations for us. It sucks for all the seniors that we can’t be on the field with such young, talented guys like Brian Strange and David Tirrell.”
Collingwood also noted coach Parent’s impact on his high school career.
“He is one of the best coaches in Western Mass.,” Collingwood explained. “He’s like a father figure. He is one of the smartest coaches around, and doesn’t get enough credit for that. He does his job correctly.”
Collingwood said his decision to attend Westfield State was made in tandem with his fellow teammate and friend, Coughlin.
“Me and Riley both wanted to go somewhere where we could go together. The coaches (at Westfield State) understood us the most … They treat us like family, it made sense financially, and we get to stay here in Westfield.
Coach Parent said it was the perfect match, noting “both led this program here so it’s nice to see them stay local.” 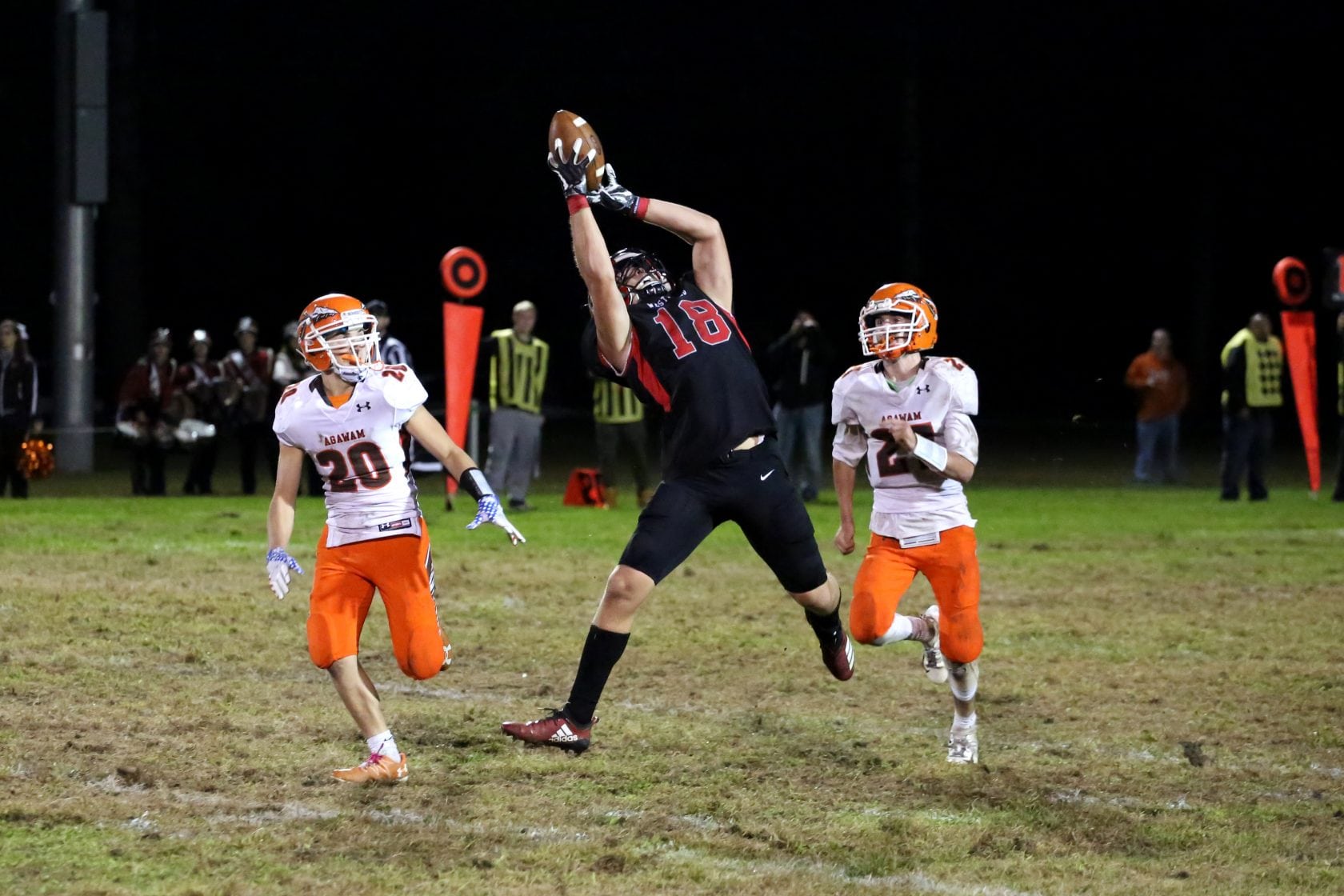