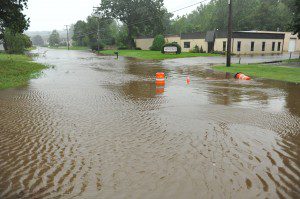 WESTFIELD – Members of the Legislative and Ordinance Committee voted last night to bring the taking of Mainline Drive onto the City Council floor with a recommendation to conditionally approve taking it by eminent domain.
City Engineer Mark Cressotti appeared before the committee to present the details of the land taking, which is being pushed by the need to prevent flooding, not only of the industrial road, but also the nearby Westgate Plaza.
“A corporation owns the street, but that corporation is defunct, so the title holder is nonexistent,” Cressotti said. “The corporation did not comply with state requirements, so it is no longer a viable entity.”
“We have made significant effort to reach out to find any heirs. The problem is that the heirs do not have title, don’t have the authority to convey the road to the city,” Cressotti said.
The chronic flooding of Mainline Drive and the adjacent plaza is due to how drainage was installed when the industrial road was originally constructed.
Cressotti said that the city has been awarded a Federal Emergency Management Agency (FEMA) grant to install technology to prevent the frequent flooding of Mainline Drive, which floods through the drainage lines intended to carry stormwater from the roadway to the nearby Little River.
The chronic flooding is due to the fact that river is subject to rapid rises in the water level during major storms and pushes water backward through the storm drains into the low areas of Mainline Drive, which was constructed in the 1970s when the industrial subdivision by the developers, SAB Realty, kept the roadway right of way.
“There is a drainage pipe in the low spot in the roadway, but the problem is that when Little River rises, it backs up through the drainage pipe, causing the flooding,” Cressotti said. “It’s a public liability due to private ownership.”
“I have a grant to install back-flow devices (on the outflow of the stormwater drainage line), but I can’t do that because I can’t spend public finds to improve private property,” Cressotti said. “We’ve been pursuing this (legal recourse) for over a year.”
Ward 4 Councilor Mary O’Connell made the motion to approve the land taking, but added a condition that the city’s Law Department explain, in writing, why the City Council needed to approve the imminent domain process to acquire that land.
“I want something in writing from legal,” O’Connell said. “I want to be 100 percent sure that somebody is not going to show up in a year with a claim.”
Ward 1 Councilor Christopher Keefe, who is chairman of the L&O, agreed with O’Connell.
“I want this clarified, that the corporate entity has expired,” Keefe said. “It will help explain this when we bring it out on the council floor.”
They City Council is slated to meet Thursday, Feb. 7, 2013 at 7 p.m.