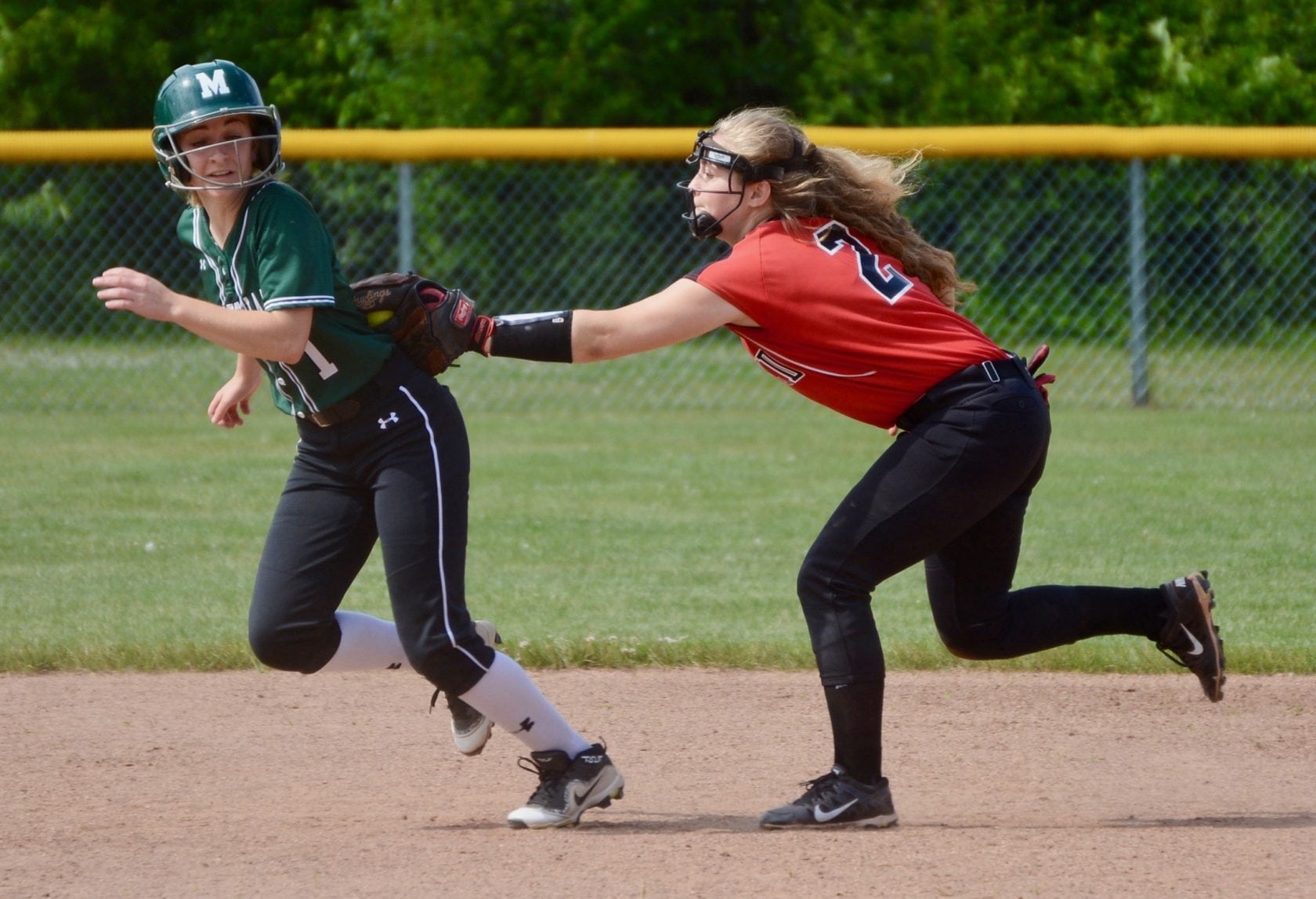 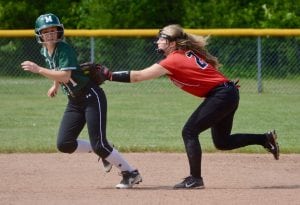 Westfield shortstop Casey Almeida tags out the Minnechaug base runner after successfully running her down Thursday in Wilbraham. (Photo by Chris Putz)

WILBRAHAM – WILBRAHAM – The postseason field is filled with a bunch of master craftsmen and craftswomen who lay down the foundation for advancement.
Minnechaug senior softball pitcher Rachel Crafts was the latest ball player to fill the stat sheet and lift her team, the fourth-seeded Falcons to victory, a 4-2 win over No. 7 Westfield in a West Division 1 quarterfinal Thursday. Crafts kept the Bombers off balance, scattering eight hits over seven complete innings, striking out five batters and walking two while allowing just one run.
Crafts also went 2-for-3 at the plate with a double, home run, two runs, and an RBI. She homered in the first inning for the game’s first run.
Westfield threatened to tie the game or take the lead in the top of the fourth with two runners on and one out. The Bombers suffered a bit of bad luck though as the batter ran into the ball for an out. A ground out ended the inning.
Minnechaug made it 2-0 in the bottom half of the inning when Sarah Rossi plated Melanie Ward with a base hit to left field.
Westfield cut the lead in half in the top of the fifth with an RBI single from Hayley Moniz.
Minnechaug responded with Jenna Murray’s two-run line drive single through the right side for a 4-1 advantage.
Westfield made it interesting in the last inning. Lindsey Kiltonic, Moniz, and Almeida each landed singles with Almeida’s resulting in a run. The Bombers threatened to tie it, but Crafts recorded a strikeout for the final out of the game to secure the Falcons flight into the semifinals.
Moniz, Almeida, and Kiltonic finished with two hits apiece. Westfield’s Madi Robitaille doubled.
Almeida and Erin Gour also combined for a nice inning-ending double play in the fourth.

WEST D2 OPENING ROUND
No. 7 Southwick 10, No. 10 Sabis 2
Southwick advanced to the quarterfinals where it will take on No. 2 Hoosac Valley (15-3). The game will be played Monday in Cheshire at 4 p.m.
No game details were reported.

GIRLS LACROSSE
CENTRAL-WEST D1 QUARTERFINALS
Lancers prevail
No. 1 Longmeadow 17, No. 6 Westfield 6
Westfield (12-7) delivered a tremendous effort against Longmeadow (15-4), holding the Lancers to just a one-goal lead through nearly half a game until consecutive penalties on the Bombers changed the momentum of the game.
Hannah Jarvis led Westfield with four goals, and Mackenzie Liptak had two. Bombers’ goalie Liz Clark made seven saves.