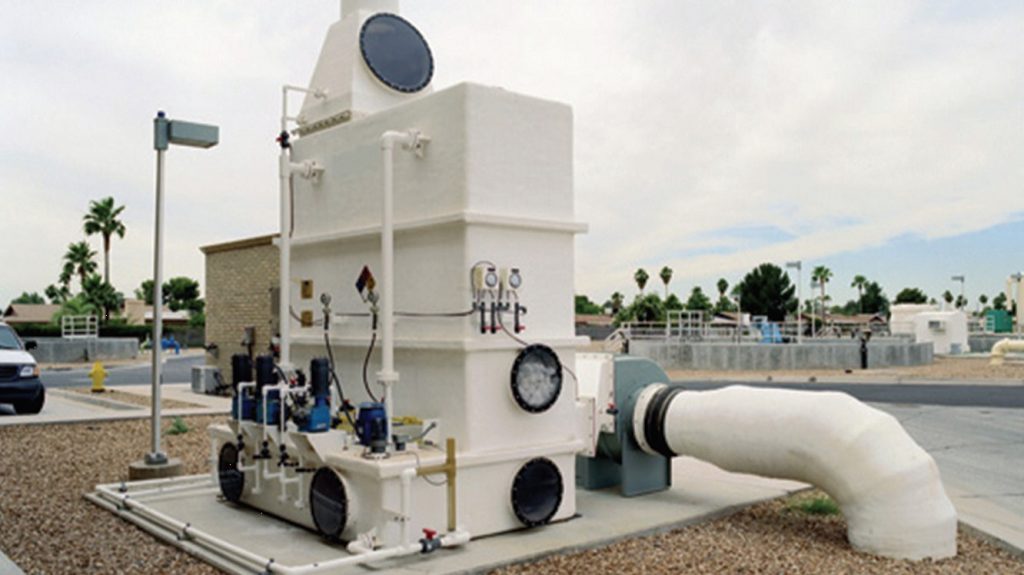 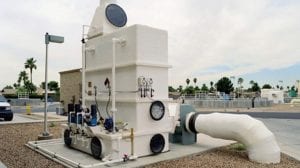 WESTFIELD – The Department of Public Works plans to replace its 22-year-old odor scrubber with a new system at a cost of $477,275.

The City of Westfield Water Pollution Control Plant, a dual stage wet odor control scrubber was installed in 1997 in order to eliminate noxious odors generated from the sludge de-watering room and sludge loading truck way located within the Operations Building. DPW Wastewater Division Superintendent Jeffrey Gamelli Jr. said that he believes that before the unit was installed, the air was simply vented out into the atmosphere without treatment. He added that the chemicals that were released are not harmful in their concentrations in the atmosphere, but that they cause an unpleasant odor.

The odor control scrubber is designed to ventilate the processing area and treat the vented odorous air. Contaminants that cause hydrogen sulfide gas odors and ammonia odors are removed from the air prior to being discharged to the outside atmosphere. According to Gamelli, the scrubbers remove the odorous chemicals from the air in two stages. In the first stage, sulfuric acid is applied to lower the PH levels. In the second stage, sodium hydroxide and sodium hypochlorite (bleach) is added as well.

The 22- year-old unit is currently removing noxious air from space but it is no longer able to treat it efficiently and effectively due to the normal degradation of the equipment. The existing odor control scrubber is severely corroded, outdated, and structurally degraded; it will be replaced with a new equivalent scrubber. This process is essential to prevent the collection of gases in the above mentioned spaces. Failure of this system to continue without proper operation is allowing potentially explosive and highly corrosive gases to build up during de-watering operations (which is 5 days per week), resulting in a safety and health hazard to employees, and premature corrosion damage to equipment and structures.

Wet air scrubbing is the most flexible and reliable technology for vapor-phase wastewater odor control, according to the DPW. This technology can be used to treat virtually any water-soluble contaminant. In addition to hydrogen sulfide and “organic” odors, wet scrubbing is very effective for ammonia removal. In a wet air scrubber the odor contaminants are solubilized from the vapor phase into an aqueous chemical solution. The removal mechanism is purely chemical and is not subject to upsets as are biological processes. The chemical balance in the system is automatically and continuously maintained, even under changing loading conditions, minimizing the chance for odor break-through. The application of a multi-stage scrubber allows the utilization of a different chemical solution in each of the stages to efficiently use chemicals and target a wide range of contaminants for treatment. 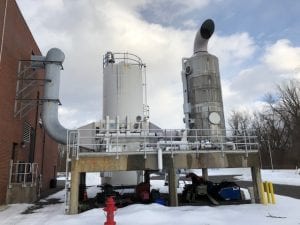 The City of Westfield Water Pollution Control Facility has procured a contract with RH White Construction to remove and replace the existing odor control scrubber with a new Evoqua LO/PRO® system, which is a UNITARY design, two-stage, once-through, packaged Odor Control Scrubber manufactured of premium vinyl ester FRP. It consists of two counter-current stages of gas adsorption, two integral sumps, mist eliminators, exhaust fan, exhaust stack, recirculation and metering pumps, piping, valves, fittings, instrumentation and controls to make a complete and functional system. Each system is completely factory assembled and tested prior to shipment. The multi-stage design ensures a minimum of 99.0% H2S & NH3 removal. This configuration is well suited to dewatering and solids handling operations. Gammelli said that he hopes and expects that the new unit will last much longer than the old one. He believes that the old units failure was in part because it was not properly maintained throughout its life. The scrubber had rotted out structurally and its automated controls failed.

“We call it, ‘the dinosaur’,” said Gammelli.

The existing odor control scrubber will be demolished and removed by the end of June 2019. The new equipment installation has a tentative schedule to be operational by the end of November 2019. During the five months of time between the removal and installation, the odorous air released from the process will not have a noticeable change because the current equipment to be replaced has not been treating the odorous air effectively for many years. The course of odor control treatment will continue with dosing odor oxidizing chemicals Sodium Hypochlorite and Sodium Permanganate to the sludge being processed. Once the new odor control scrubber is installed and operational, the odorous air being released from the sludge dewatering process will be treated efficiently and effectively with little to no odor being released into the atmosphere.