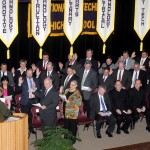 WESTFIELD – Elected officials sworn into office at the inaugural ceremony Tuesday morning at the Westfield Vocation-Technical High School plunged directly into the duties of their various offices.
Mayor Daniel M. Knapik, who is entering his second term as the city’s chief executive officer, thanked his fellow elected officials for accepting the responsibilities of their various offices.
“Congratulations to the elected officials here today and to the newly elected officials, I say, not only congratulations, but welcome to elected public service,” Knapik said during his inaugural speech. “Participation in municipal government as an elected official is one of the purest forms of democracy practiced in our great nation. Men and woman of all walks of life, occupations and life experiences, offering themselves to represent their fellow citizens in their government is a great tradition. There are no career politicians in this type of government. Just average, everyday citizens who have full-time jobs and ran for elected office so they can make a contribution to their community.”
That contribution began almost immediately as the City Council, with newly elected Agma Sweeney and James R. Adams, a former councilor returning for another term of office, convened at 11:30 to elect the council president for 2012.
Ward 1 Councilor Christopher Keefe, who served as council present in 2011, was elected to continue those duties this year. One of his first duties was to name council committee membership.
Keefe made few changes to the committees he established last year. The only major changes were expanding the Legislative & Ordinance Committee to five members, instead of the traditional three members. Keefe also appointed Adams as chairman of the Public Health & Safety Committee, replacing former councilor Nicholas Morganelli, and appointed Sweeney to serve as chairwoman of the Government Relations Committee, replacing former councilor Gerald Tracy.
Adams was also named to the L&O, joining Chairman James E. Brown Jr., Patti Andras, Mary O’Connell and John Beltrandi.
The Finance Committee membership remains the same this year with Chairman Richard E. Onofrey Jr., Christopher Crean and David A. Flaherty.
The council members also adopted the existing rules for conduct of council meetings and business, although the L&O and the Ad Hoc Charter & Rules Committee is slated to meet Thursday, Jan. 5 in a joint session prior to the first City Council session of 2012 and may bring a proposed revision of the City Council Rules to the floor for discussion.
Knapik and members of the School Committee, including the three new members Ramon Diaz Jr., Diane M. Mayhew and Michael D. Tirrell, also jumped into 2012 at a meeting of the School Building Committee Tuesday night at the Ashley Street school administration building.
The city is in the process of building a 96,000-square-foot, 600-stundent, $36 million elementary school at the Ashley Street site.
Not only are the School Committee members participants of that project, they will soon begin the difficult process of redistricting to decide which students will attend the new school.
The current plan is to close Abner Gibbs and Franklin Avenue elementary schools with the enrollment of those two buildings comprising the majority of the new school population.
The redistricting process will also effect students at both the Highland Avenue School and the Juniper Park School as the district in the city’s sound side is redefined. The anticipated closing of Juniper Park Elementary School will further complicate the redistricting process.
The Municipal Light Board, with newly elected Jane C. Wensley representing Ward 3, will convene tonight for its first session of 2012. The MLB sets policy for operations of the municipal gas and electric department and will be dealing with a number of seasonal issues a well as strategic issues as the department continues to expand and upgrade its facilities.