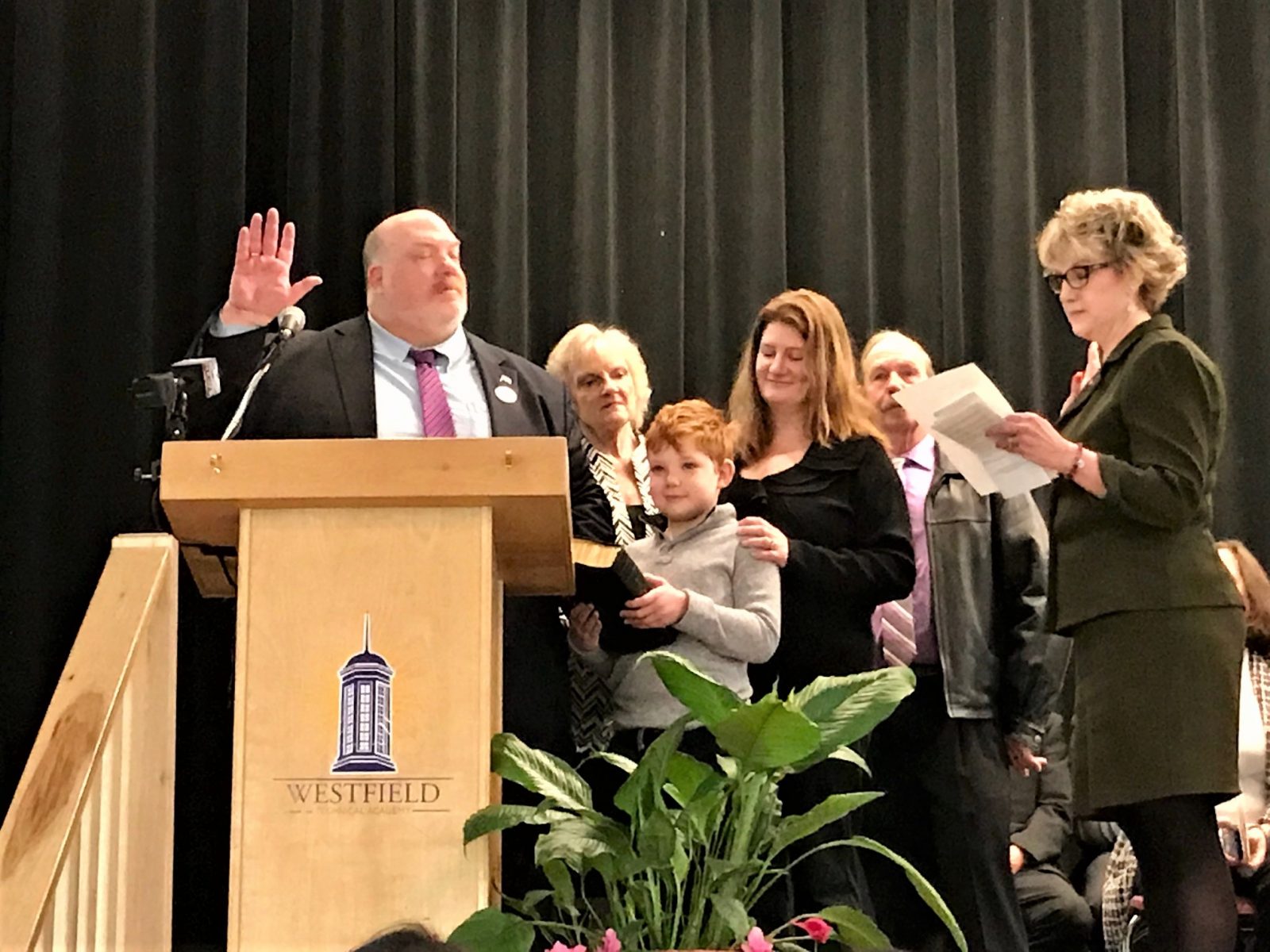 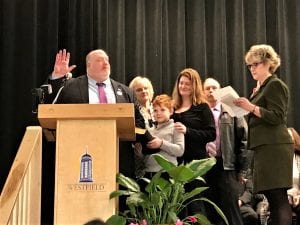 Mayor Donald F. Humason Jr. is given the Oath of Office by City Clerk Karen M. Fanion Jan. 6, 2020 as his wife Janice, son Quinn and parents Donald and Alberta surround him. (Photo by Hope E. Tremblay)

WESTFIELD – Mayor Donald F. Humason Jr. said during his inaugural address that he was preparing for the role of mayor his entire life.

Humason was sworn-in as Westfield’s mayor Jan. 6 by City Clerk Karen M. Fanion in front of a crowd at Westfield Technical Academy, which included his wife Janice, son Quinn and parents Donald and Alberta.

Humason and elected members of the Westfield School Committee, Westfield City Council, Westfield Municipal Light Board and the Westfield Athenaeum Trustee took the oath of office during the city’s inauguration ceremony.

Although Humason said his comments were not a true “State of the City” speech, he did say Westfield’s outlook is good.

“We are doing pretty well. We’re an old city; we’re coming off of 2019 and celebrating our 350th anniversary,” he said, noting that with the city’s age comes the knowledge needed to handle concerns.

“It gives us the maturity, experience and ability” to tackle any problems, he said.

Humason thanked his family, friends, fellow elected officials and noted that City Council President Ralph J. Figy, who served as acting mayor the past two months, helped him prepare to take over the corner office by setting up meeting with city department employees and getting him up to speed on some issues.

“As acting mayor, he has been a phenomenal help,” Humason said. “You are the rock and your hard work prepared me for today.” 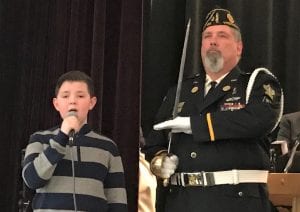 Humason thanked Pastor David Young of Westfield Evangelical Free Church for the invocation and Fr. Dan Pacheloc of Our Lady of the Blessed Sacrament Church for giving the benediction. He also noted that he was gifted a Bible from the Pioneer Valley Baptist Church.

Humason said he would host a Mayor’s Open House in February and noted that he will focus on the needs of not only of residents, but businesses as well.

“Westfield is open for business,” he said, encouraging new businesses to look to Westfield, as well as existing businesses to expand.

Humason said in speaking with residents throughout his campaign he came away with clear desires, such as transparency, financial efficiency, clean water, safe roads and excellent schools.

“Together, we’re going to do our best to make sure we have that,” he said, looking at his fellow officials on stage. “I want to work together.”

Humason urged committee members not to “air dirty laundry” in the public, but instead have a united, “positive” front. He also addressed his critics and said he encourages criticism.

“I’m going to make mistakes – I’m human,” he said, adding that he prefers criticism in person or via phone, rather than on social media.

Humason did warn the “complainers” that he welcomes their complaints as well, but they should be prepared to receive a call from him.

“I’ll be calling you to put your ideas to work,” he said.

He then invited the public to attend the City Council and School Committee meetings that night.

The inauguration included the posting of colors by the American Legion Post 124, singing of the “Star Spangled Banner” by student Matthew Bussell, a musical selection by the combined Westfield Technical Academy and Westfield High School band, and “America the Beautiful” performed by the Westfield High Show Choir.