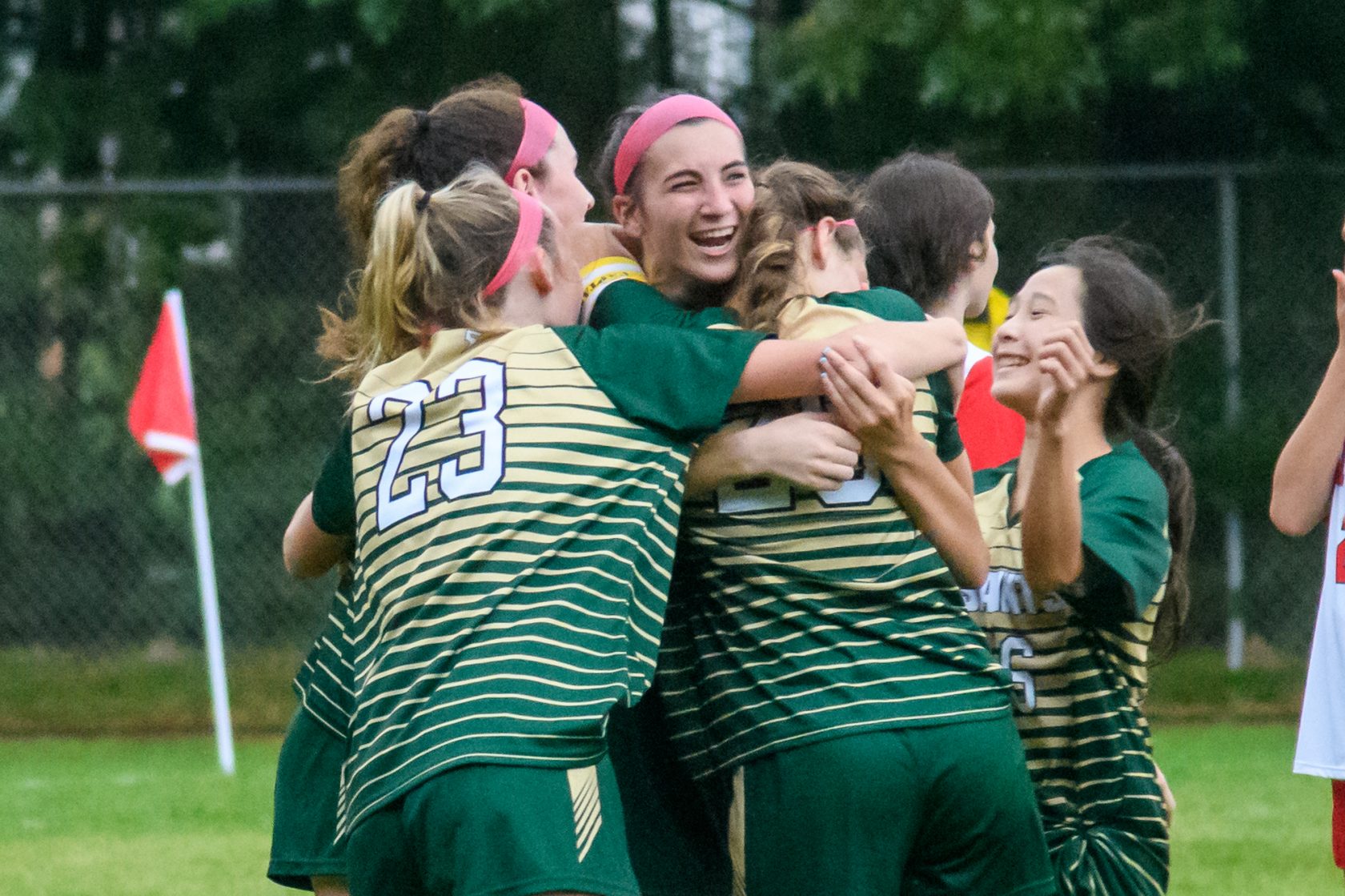 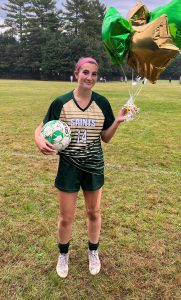 WESTFIELD – 98 … 99 … 100.
St. Mary’s sophomore Emma Goodreau reached her career 100th point in dramatic fashion, tallying a hat trick for a 6-1 Saints win over the Athol Red Raiders Tuesday at Westfield Intermediate School.
Emma took a pass from her sister, Allie, a senior, deep in the corner of Athol’s zone, dribbled behind and around a defensive player and squeezed the ball into a small window, curling the ball in between the near post and the goalie into the back of the goal in the 44th minute to net the milestone.
Emma and her teammates burst into celebration and the game was temporarily halted to acknowledge the accomplishment.
“It felt really good,” Emma said. “It was very exciting, very stressful. …My team all wanted me to get it. With them all trying, it stressed me out more but then I realized they were all working to help me out and I accomplished my goal.” 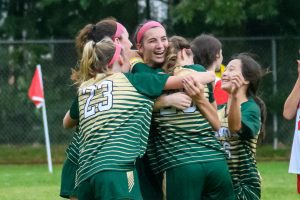 Emma scored the team’s first goal of the game in the opening minute, making a run up the left sideline and sticking it into the net.
A short while later, St. Mary’s peppered the Athol goal with several shots. Red Raiders goalie Jenna Bonenfant made three consecutive saves before Saints freshman Eliana Umana Kimura hammered home a rebound in the 19th minute for a 2-0 lead.
Anna Putnick gave St. Mary’s a 3-0 advantage with a goal in the 26th minute.
Six minutes later, Emma plucked the ball away from the opposition near the top of the Athol box and delivered a quick strike kick into the net for her 99th point.
Athol broke up the shutout late in the first half with a penalty kick score. The goal ended St. Mary’s junior goalie Amelia Willenborg’s streak of shutouts at 13 straight games.
Then early in the second half, Emma reached her milestone moment.
“I’m very proud of her,” said Allie, who also reached 100 points her sophomore season. “Physically you know you can do it (but) … the last three (points) are the hardest because it’s all mental.”
Allie also added a second half goal.
“To have two sisters both get (100 points) their sophomore year is pretty impressive,” St. Mary’s girls soccer coach Patrick Olearcek said. “It was nice that both sisters were out there together. We got by today, we got by all the pomp and circumstance of the goal, which is tremendous. (Emma) is going to add plenty to that 100 with bigger and better things. Hopefully it starts Thursday.”
GAME NOTES: Coach Olearcek said the leadership skills of Willenborg and Allie Goodreau were on full display during Emma’s chase for 100 points Tuesday. He also praised the ascension of the quick-footed Umana Kimura, noting “Ellie’s really turned it on. That makes us more dangerous.”

Tigers tie McCann
Westfield Technical Academy 2, McCann Tech 2
Mia Slack put Westfield Tech on the scoreboard with a direct kick from well outside the box. Tigers captain Rileigh Sagan scored off a pass from Mackenzie Chase on a scramble in front of the goal to give her team a 2-1 lead.
McCann Tech scored a game-tying goal in the 70th minute. Westfield Tech goalie Lindsey Deland made 11 saves to preserve a tie on her birthday.
“This was an absolute battle,” Westfield Tech coach Lyle Washington said. “The last two games we’ve made some adjustments with our formation and some of my girls are playing out of their comfort zone but they are stepping up and playing hard. Having never beat McCann since coaching, a 2-2 tie in the next best thing.”
With the tie, Westfield Tech improved to 3-2-1. 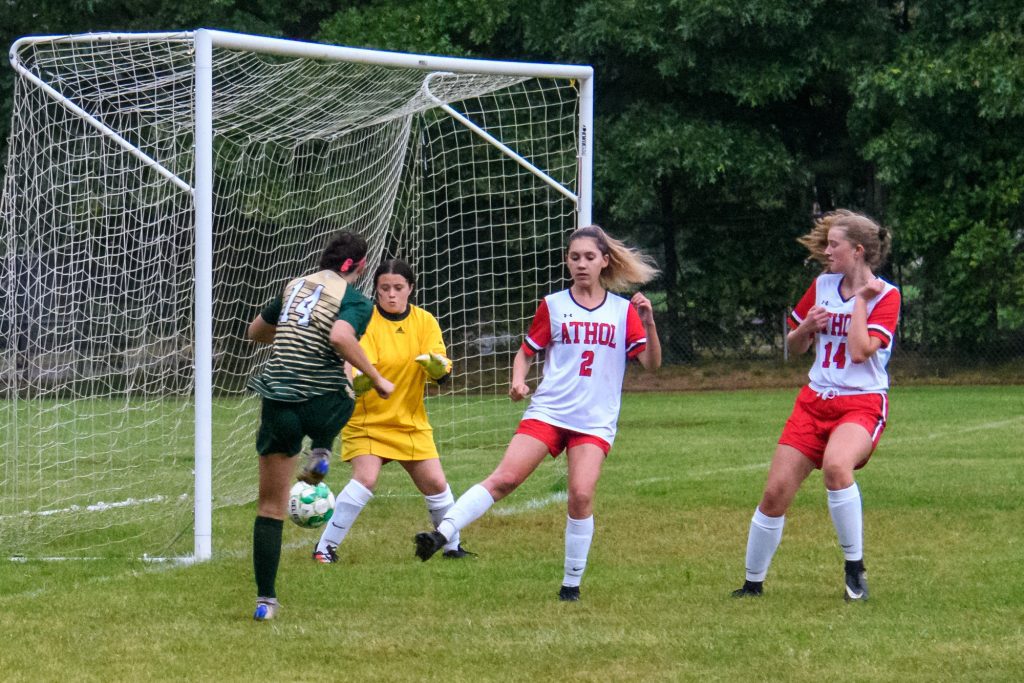 Coming off the left side and closing on the Athol goalie, Emma Goodreau (14) scores her 100th point on a short side shot. (BILL DEREN PHOTO)