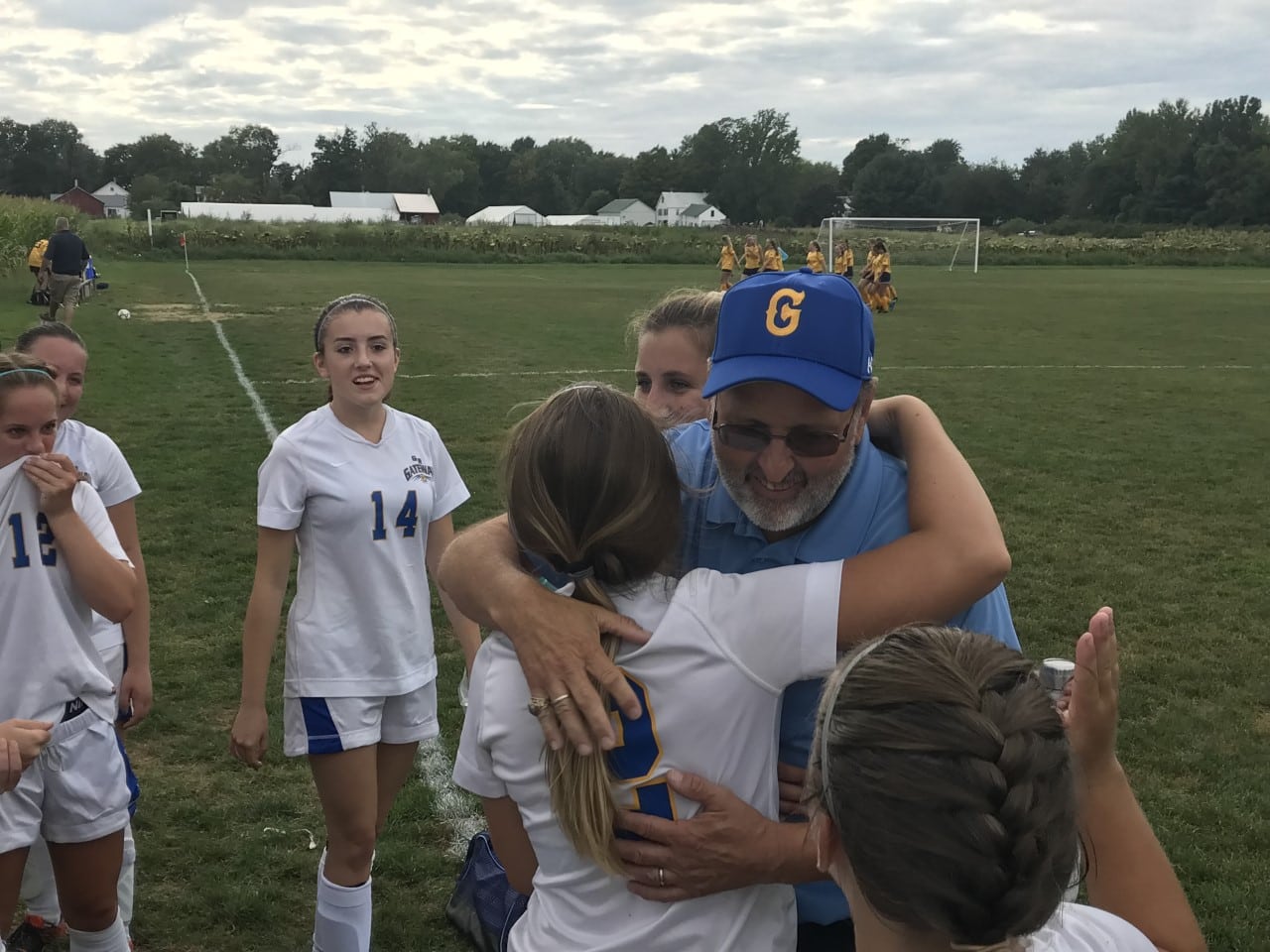 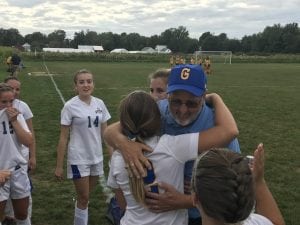 Gateway High School girls soccer coach Steve Estelle receives congratulatory hugs, high fives, and “thanks” from his players after recording his 300th victory with a 2-0 win over Hopkins Academy during the 2018 fall season. (THE WESTFIELD NEWS FILE PHOTO)

HUNTINGTON – Former Gateway Regional High School girls soccer coach Steve Estelle knows a thing or two about history.
On Friday, September 7, 2018, Estelle coached Gateway to a 2-0 road win over Hopkins Academy. On any other day, it easily could have been just another ho-hum victory, but on this day, the longtime head coach cemented his place in Western Massachusetts lore with his 300th career win.
“It just feels good to grow up in Huntington, to play for Gateway … and bring a little bit of knowledge and a little bit of experience to the game that I grew up playing and loving,” Estelle said, just moments after celebrating his achievement with his players.
Steve Estelle and his father, Bud, created the program at the school in the late 1980s. With geography a constant challenge, living out in the hill towns, Gateway had to overcome routinely long road trips.
“You have to make a lot of sacrifices when you have to travel that far,” coach Steve Estelle explained. “My girls, over the years, have all been extremely committed to the game and getting better at the game…. I can only hope that my experience and knowledge and what I’ve learned over the years has helped make the program what it is today.”
Three decades and seven Western Massachusetts later, the Gateway girls soccer program is now in a good place. That feat has not gone unrecognized. 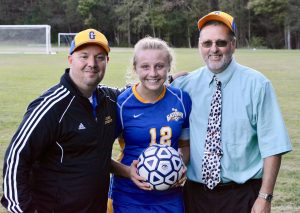 Estelle was recently named the 2019-20 National Federation of State High School Association’s National Girls Soccer Coach of the Year and Section 1 Coach of the year. Section 1 is comprised of the New England states, New York, and New Jersey.
“I am honored and pleasantly surprised to be recognized … as Coach of the Year,” Estelle said in a prepared statement. “I have had the privilege to teach and coach at the beautiful little school district of Gateway Regional in the hill towns of Western Massachusetts for the past 30 years. I believe this award is a tribute to the excellence of my student-athletes at Gateway and the support of my assistant coaches.”
During his 30-year head coaching tenure, Estelle won 11 league titles and seven Western Massachusetts championships, and led his team to three state title appearances. He compiled a career record of 324-153-78 and was named the 2012 Division 3 Western Mass Coach of the Year. 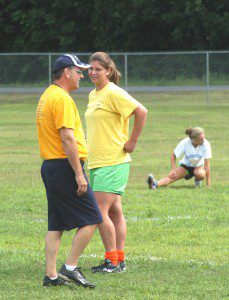 Estelle retired from teaching middle school history in 2014, and retired from coaching prior to the start of the 2020 season.
Gateway Regional Athletic Director Matt Bonenfant said coach Estelle “was always fair and honest with his players.” Bonenfant, and team captains Jesse Walton, Jessica Van Heynigen, and Ava Auclair nominated coach Estelle for the award.
“Many of the players wanted to make sure he coached through the entirety of their high school career,” Bonenfant explained. “He demanded a lot from his players. He appreciated everything his players gave to the team, and he tried to give back twofold.”
Bonenfant served as Estelle’s assistant coach and the junior varsity girls soccer head coach, beginning in fall 2008.
“Steve is a dear friend of mine, and someone I look to for guidance, as well as just someone to bounce ideas off in athletics, teaching, and general life matters,” Bonenfant said. “Steve is also the consummate family man. …I can honestly say that there isn’t a more deserving person than Stephen Estelle to be named National Girls Soccer Coach of the Year.”
The NFHS, which has been recognizing coaches through an awards program since 1982, honors coaches in the top 10 girls sports and top 10 boys sports (by participation numbers), and in two “other” sports – – one for boys and one for girls – – that are not included in the top 10 listings.