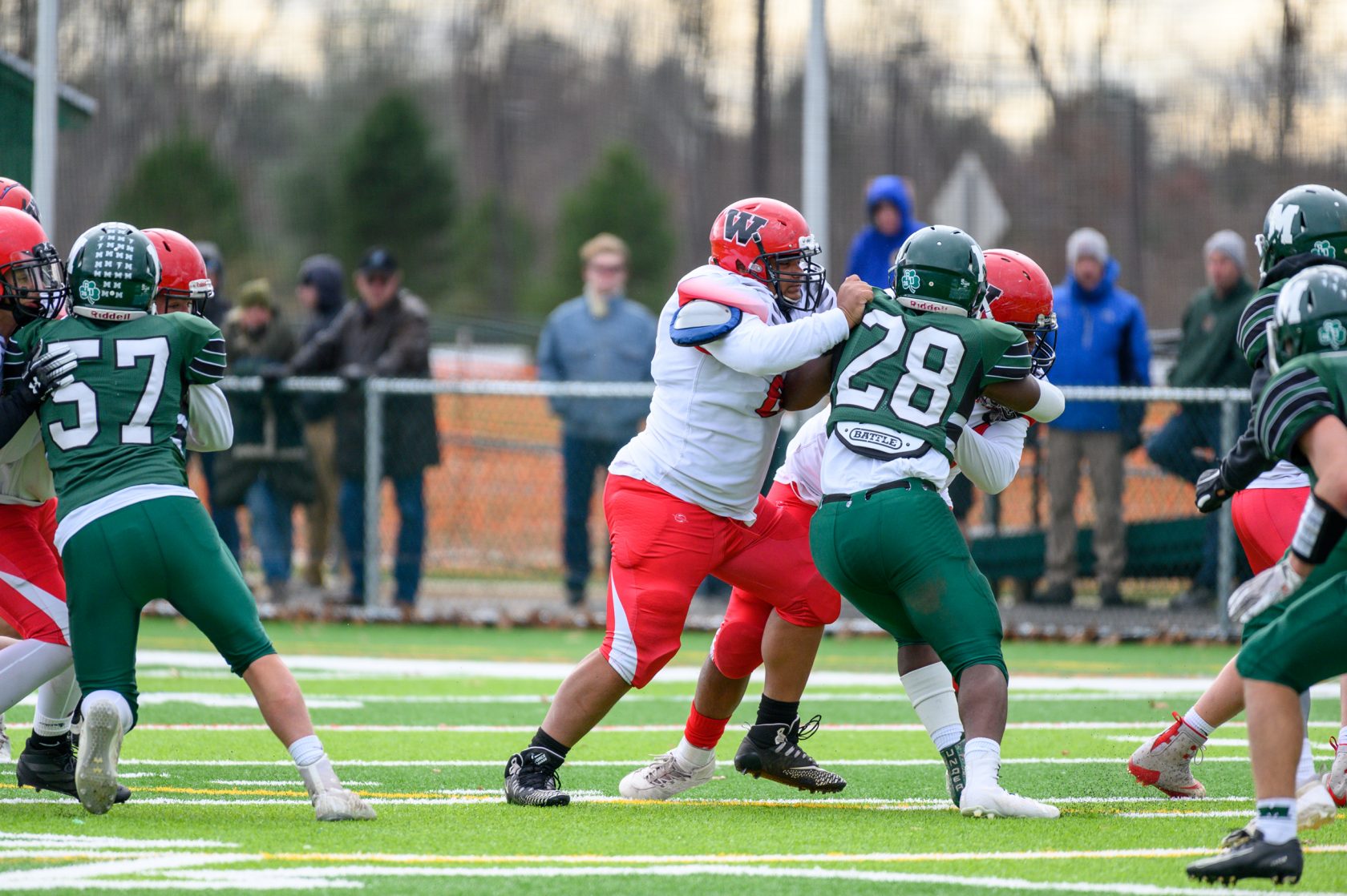 WILBRAHAM – On a cold, blustery Thanksgiving Day, the Minnechaug High School football team (9-3) handily beat the Westfield Bombers (6-5) in a chippy but one-sided affair that saw the Falcons win 28-7 in the final game of the season for both teams.
Westfield won the opening coin toss and differed, electing to start with the ball in the second half, giving Minnechaug the game’s opening offensive drive. The series lasted more than half the quarter as running back Joe Maurer carried the load for the Falcons. Then with 5:42 left in the frame, quarterback Anthony Izzo took the ball a keeper into the end zone on third-and-goal to take a 7-0 lead. 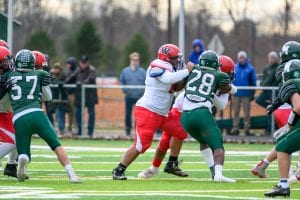 Westfield then fumbled the very short kickoff following the touchdown but recovered at their own 36-yard line before going three-and-out. Minnechaug fumbled the punt but recovered it at their own 13 yard-line. Just three plays later, Izzo threw an interception to set the Bombers up deep in Falcon territory. However, the drive did not go anywhere and the Bombers turned the ball over on downs.
After several short gains, Minnechaug blew the game open when Izzo launched a deep pass to his receiver James Jolicoeur, who walked right into the end zone with only a celebrating teammate in the area.
Westfield finally responded to the Minnechaug onslaught with a long touchdown drive of their own in the second quarter. After two fourth down penalties, including an offsides and a pass interference, the Bombers found themselves facing a third and two from the Falcons’ five yard line. Quarterback Matthew Adamites handed the ball off to running back Chris Barber who took the carry in for the touchdown to pull within one score heading into the halftime break.
Throughout the game both sides were very chippy, playing well after the whistle with both sides’ coaches getting into arguments with the referees several times. In one instance in the second quarter, a Minnechaug player ran into Barber after punting the football, resulting in a roughing the kicker penalty. Immediately after, Barber squared up and got right into the face of the other player before being hurried away by teammates.
Westfield opened the second half with a quick three and out after receiving the kickoff and bombed a punt to the Minnechaug side of the field that the wind carried into the end zone for a touch back, setting the Falcons up at their own 20 yard-line.
Minnechaug moved right down the field with three quick plays to set themselves up in Westfield territory. On the next play, Izzo lofted a pass for his receiver, Henry, who walked into the end zone for another Falcon touchdown.
This time, Westfield blocked the extra point after being called offsides on the first attempt to hold Minnechaug to a 20-7 lead just over five minutes into the half.
After a short kickoff, Westfield took over at their own 38 yard line before Adamites fumbled on a read-option play and Minnechaug recovered.
After Jolicoeur was taken down by a Westfield defensive back for a pass interference, Minnechaug found themselves with a first-and-goal. The Bombers held strong for three plays but Maurer took the ball on a fourth-and-inches handoff into the end zone to extend the lead to 26-7. He then carried the ball back into the end zone for the two-point conversion to make it a 28-7 game after three quarters.
For most of the fourth quarter, neither team budged on defense until the closing minutes of the game when Minnechaug’s punter fumbled the snap and Westfield recovered with 6:20 remaining in the game. In a series of runs, Adamites and Barber carried the Bombers down the field to set up within the Falcons’ 20, including a rush that Adamites fumbled and recovered for a first down on fourth down.
Adamites then fumbled the ball on third down, right into Minnechaug’s hands, with just under two minutes to play before Izzo and Maurer ended the game with a quick handoff on first down and kneeling on second.
For the second time this month, Minnechaug put up 28 on Westfield, taking home victories in both meetings while allowing just seven points.