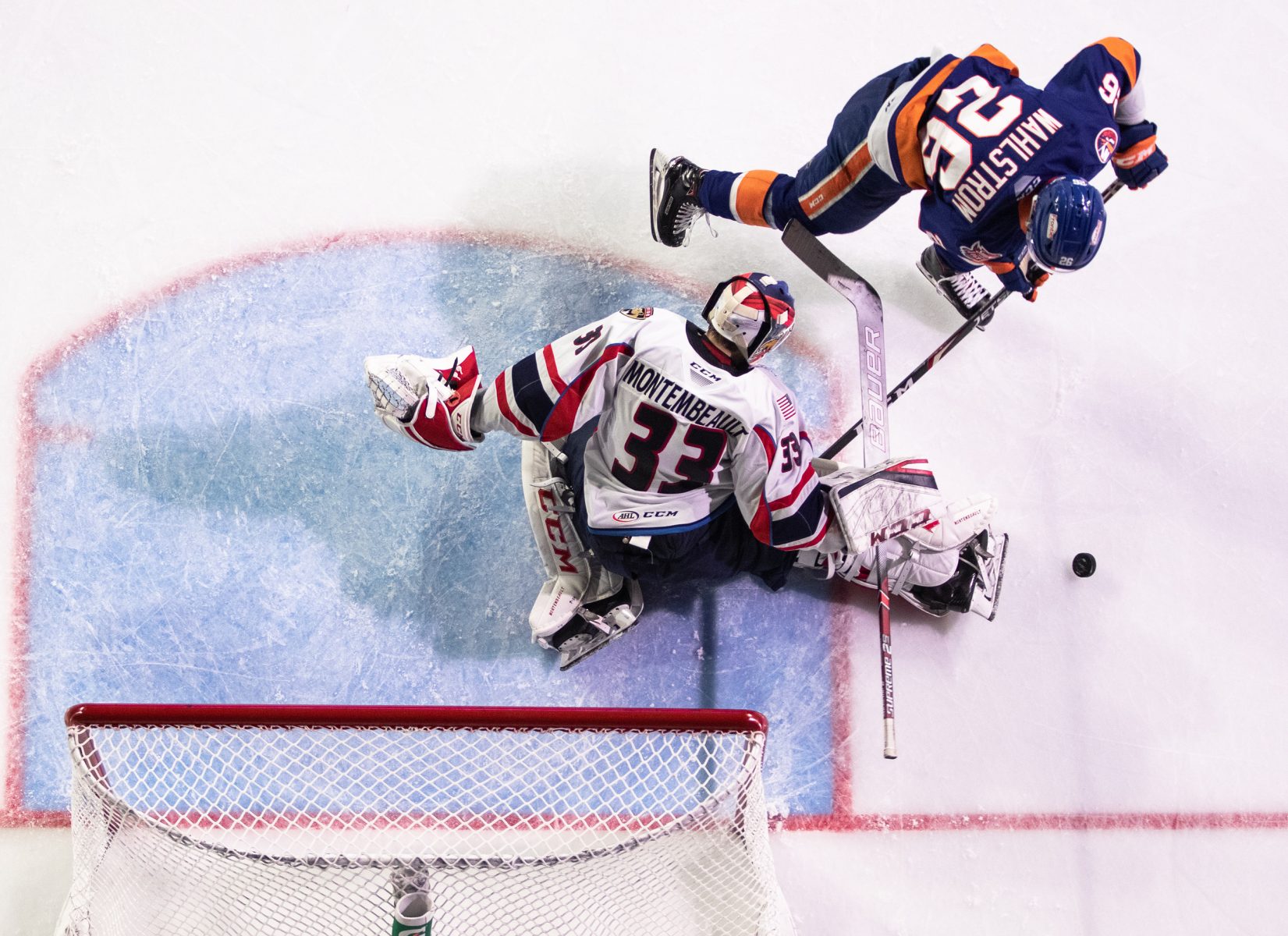 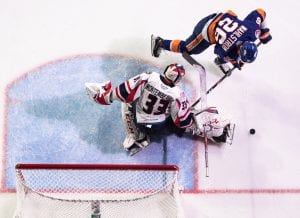 SPRINGFIELD – The Springfield Thunderbirds (12-10-0-0) battled back from two deficits, but could not find a third tying goal in a 3-2 loss at the hands of the Bridgeport Sound Tigers (7-11-3-1) on Wednesday night inside the MassMutual Center.
The two teams prodded through the first five minutes, trading chances but ultimately not finding the back of a net in a series where there were a total of just five goals between the teams over the last two matchups.
For a sixth straight game, the Thunderbirds would be forced to play from a 1-0 hole, but it took until the 12:41 mark of the opening period for either team to strike past steady goaltending by Springfield’s Sam Montembeault and Bridgeport’s Chris Gibson.
The Sound Tigers finally broke through when John Stevens pulled a puck off the end wall and put it into the blue paint, where Mason Jobst located it ahead of Montembeault’s paddle to jab the puck into the yawning net to make it a 1-0 game. The goal was the rookie’s second of the year. 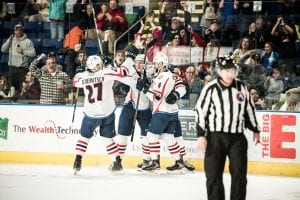 Other than that, Montembeault was splendid in the opening period of his 2019-20 Thunderbirds debut, denying 13 of 14 offerings. Gibson continued his blanking of Springfield, bringing his total up to 31 straight saves against Springfield, with 21 in a shutout win on Nov. 6 and 10 more in the opening period on Wednesday.
Special teams again would become Springfield’s specialty in the middle period, beginning with the club’s sixth shorthanded goal this season at 8:32. As the puck skipped out into the neutral zone, Henrik Borgstrom raced past Sebastian Aho, worked his way through a holding penalty, and slipped a tricky snap shot through Gibson’s five-hole to make it a 1-1 game.
The tie score would not last long, however, as Kieffer Bellows ended a 16-game goal drought by crashing the net and firing a rebound to the top shelf off of Montembeault’s left leg pad at 8:58.
The Thunderbirds’ power play then connected to tie the score on yet another special teams tally, as Owen Tippett took the shooting lane available to him from the left circle to beat Gibson at 11:27 to tie the game, 2-2. Springfield beat Gibson twice in the second to tie the game into the final period, and in doing so, snapped a streak of 39 consecutive saves by the Finnish netminder against the T-Birds.
Bridgeport would break the tie for a third time, and this time for good, when Arnaud Durandeau fired home a rebound from the left-wing side past Montembeault at the 6:47 mark of the third. It was the rookie’s fifth goal on just 12 shots on goal this season, and his second in two games against Springfield.
Gibson picked up his third win over Springfield this season with 37 saves on 39 shots, while Montembeault had 32 saves for the T-Birds.
The Thunderbirds look to salvage a win out of the three-game set with Bridgeport on Friday night inside the Webster Bank Arena. Puck drop is set for 7:00 p.m.
For more ticket information or to become a 2019-20 Springfield Thunderbirds ticket package member, or to purchase single game tickets, call (413) 739-GOAL (4625) or visit www.SpringfieldThunderbirds.com.– Story and photos courtesy of Springfield Thunderbirds