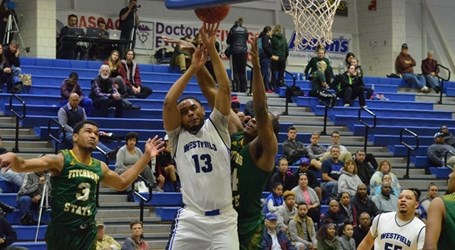 FITCHBURG — The Westfield State men’s basketball team shot a scorching 54 percentage from downtown, but could not contain all-conference performers Kwame Lee and Jaleel Bell, falling to top-seeded Fitchburg State, 96-65, in the MASCAC semifinals Thursday night at the Fitchburg State Recreation Center.
Lee, a 6-foot-9 senior center, scored a game-high 19 points, leading five Falcons in double figures. Bell, the MASCAC Player of the Year, added 15 points and 6 rebounds.
Junior guard Jose Allen (Amherst, Mass.) led Westfield State with 12 points, sinking 4-of-5 from beyond the arc.
Fitchburg State advances to the MASCAC championship game on Saturday, where they will take on No. 2 Salem State, who defeated Bridgewater State, 72-61, in the other semifinal.
Westfield State finishes its season with an 11-16 overall record. The Owls finished fifth in the conference standings, defeating Worcester State in the quarterfinals before falling to Fitchburg.
The Owls made 7-of-13 three-pointers, and shot 42 percent for the game, but committed 21 costly turnovers, leading to 26 Fitchburg points.
Fitchburg State jumped out to an early 13-6 by pounding the ball inside to Lee and letting him attack one-on-one coverage in the post. Lee scored seven of the first 13 points before picking up his second foul with 14:57 remaining and sitting out the rest of the half.
When Lee went to the bench, Fitchburg State began mixing up their defenses, confusing the Owls by shifting between zone, and man-to-man defenses in both the half court and the full court. The Falcons forced 12 first half turnovers, including 11 live-ball turnovers, which led to 15 points.
Fitchburg continuously attacked with early offense, putting the Westfield defense on its heels and forcing contact at the rim. The Falcons shot 15 free throws in the first half, making 12. Fitchburg sunk 26 of its 37 free throws on the evening.
The Falcons finished the first half on a 7-0 run, punctuated by a powerful steal and dunk by Josh Bosworth at the buzzer to give Fitchburg a 48-32 lead at the break.
Westfield State junior guard Jesus Sanchez opened the second half with an and-one and Jose Allen followed with a three to cut the Fitchburg lead to 10, but Lee answered with back-to-back three-pointers to push the lead back to 16.
Fitchburg State maintained a comfortable double-digit lead the rest of the game, answering each key Westfield State basket with a basket of their own.
Despite battling foul trouble most of the night, Owls junior center Shane Pasquantonio (Ashland, Mass.) finished just one rebound shy of a double-double, tallying 10 points and 9 rebounds. Junior guard Jesus Sanchez (Springfield, Mass.), Westfield State’s leading scorer, added 10 points.
The Owls graduate just two seniors from this year’s team, forward Tchuijo Nkamebo (Amherst, Mass.) and center Brian Foley (Worcester, Mass.). Nkamebo scored five points and grabbed five rebounds, while Foley added four points and two rebounds in his final collegiate game.
Nkamebo started 22 games for the Owls this season, averaging 7.4 points and 5.4 rebounds per game, while shooting 51 percent. Foley played in all 26 games, averaging 4.6 points and 4.3 rebounds per game. – Courtesy of Westfield State University Sports