WESTFIELD – The Salem State Vikings have earned the top seed in the Massachusetts State Collegiate Athletic Conference Men’s Ice Hockey Tournament which will begin with the quarterfinal round of games on Saturday, February 27.
Third-seeded Fitchburg State will host sixth-seeded Framingham State in the first quarterfinal on Saturday while fourth-seeded UMass Dartmouth entertains fifth-seeded Westfield both games at 4 pm. Second-seeded Plymouth State will host the winner of Fitchburg State/Framingham State on Tuesday, March 1 at 6 pm then Salem State will host the winner of UMass Dartmouth/Westfield at 7 pm.
The winner of the two semifinal contests will face off on Saturday, March 5 for the MASCAC Tournament Title and a spot in the NCAA Tournament.
Salem State earned the top seed in the MASCAC Tournament with a 16-2 record in league play. The Vikings were led by Cam Moniz who leads the conference in points scored with 27 on 17 goals and 10 assists. In goal, Marcus Zelzer tops the MASCAC in both goals against average (1.76) and save percentage (.932) at the end of the regular season. 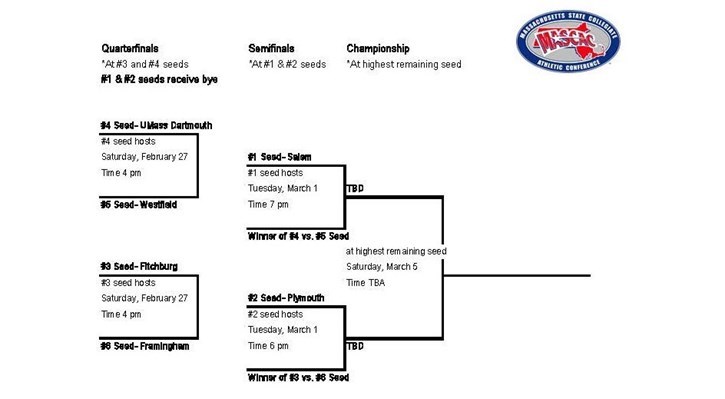 Grabbing the other first round bye in the second spot is Plymouth State who finished with a 15-2-1 record in league action. Andrew Wigg led the Panthers in total points with 26 on nine goals and 18 assists this season. Goalie Gordon Ceasar had the second best goals against average (2.00) and third best save percentage (.922) in the conference this year.
Fitchburg State is next in the third seed after tallying a 7-9-2 record. The Falcons’ duo of Nick DiNicola and John Celli both had 24 points during the regular season. DiNicola had seven goals and 17 assists while Celli netted 12 goals and 12 assists.
Landing in the fourth spot is UMass Dartmouth with a 6-8-3 record at the end of MASCAC regular season play. The Corsairs were led by Mike Kelly who tallied eight goals and 18 assists for 26 points. His assists were the second most in the conference while his total points were third.
Rounding out the tournament field are Westfield State and Framingham State with the fifth and sixth seed, respectively. The Owls finished with seven wins in conference play. Dalton Jay led the team with 17 goals and six assists for 23 points. His 17 goals on the year is tied for the most with Salem State’s Moniz. The Rams had four wins in MASCAC competition. Tyler Colacchio netted 13 goals during the regular season tied for the fourth most in the league while also adding five assists for 18 points.
During the 2015 MASCAC Men’s Ice Hockey Tournament, top-seeded Plymouth State defeated Salem State 6-2 to advance to the NCAA Tournament. – Release courtesy of the MASCAC/Westfield State University Sports