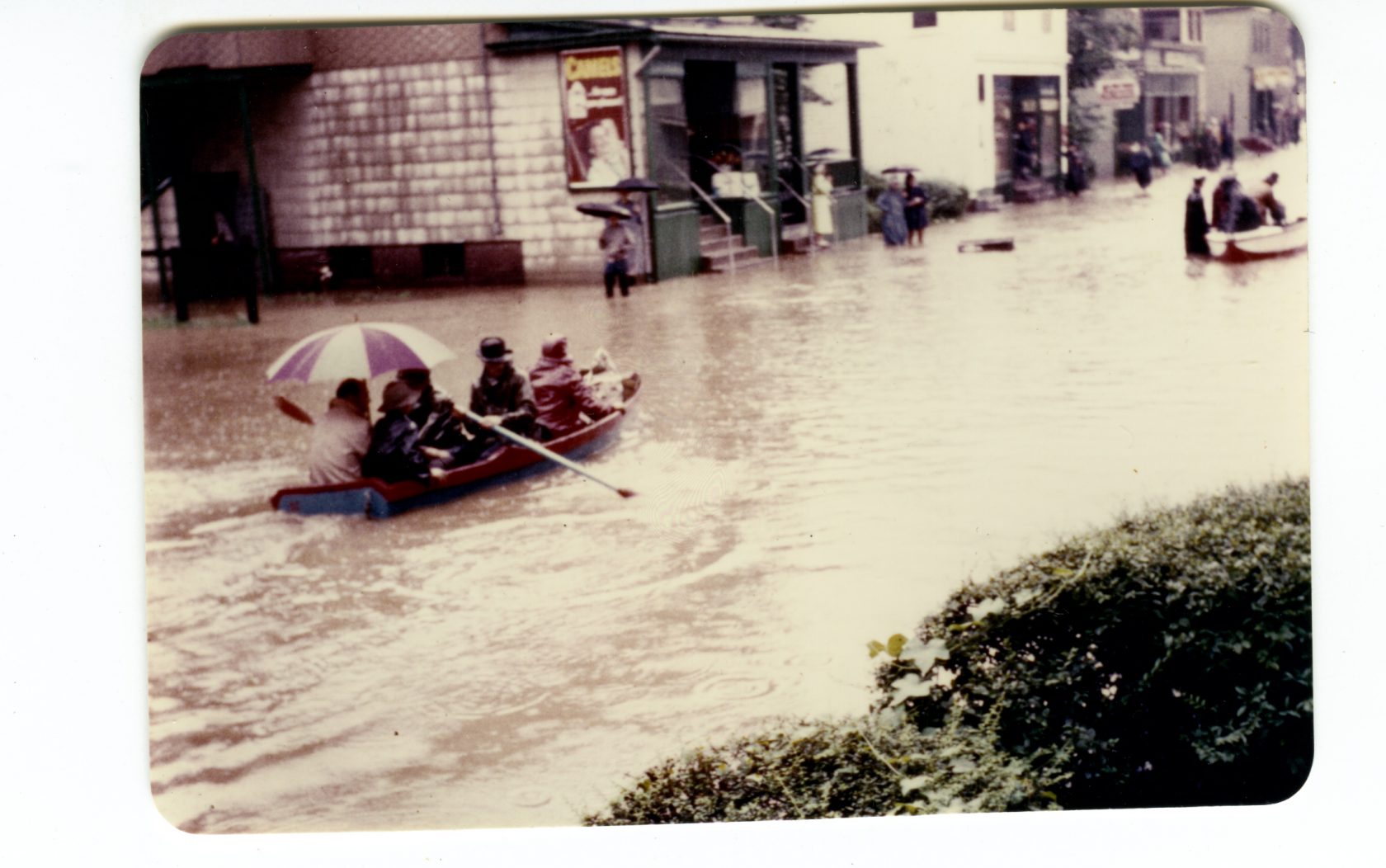 WESTFIELD-For many area residents, the “Flood of ’55” will forever be etched in their memories. 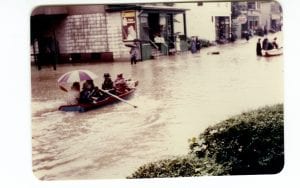 During the Flood of 1955, this is how Meadow Street was captured. (Westfield Athenaeum Archives)

For Pat Connors, she remembers the dike broke behind her family’s house and they “lost everything.”

“I remember walking across the street in water up to my waist,” said Connors in a Facebook post on the We Love Westfield Community Forum. “Mom was flat on her back after having my brother. Dad was also laid up with an operation on his knee. We were rescued by an Army duck boat.”

Connors added her recollections included seeing hoses brought into the house to “wash all the mud.”

“I also would go down the street with gallon jugs to get water from the Army,” said Connors.

“I still remember the time my father had to bring my mother to the center of Westfield to catch the duck boat to go to work,” said O’Brien. “She worked at the telephone company in Springfield as a switchboard operator and the only way she could get there was by duck boat.”

For Patty Wright, her Facebook posting noted a friend on Fowler Street “was rescued from her second floor” by someone passing by in a rowboat.

With the 64th anniversary of the flood fast approaching on Aug. 20, the Westfield Athenaeum will host two programs this month to mark the historic event.

The first offering is a 26-minute documentary titled “Five Feet and Rising” which will be played on a continuous loop in the Elizabeth Reed Room from Aug. 20 – 23 during library hours. Also, a selection of historical items from that time will be on display.

As the film unfolds, details on how Hurricanes Connie and Diane slammed the area with more than 24 inches of rain in less than a week, causing the Westfield River, Little River and Powdermill River to top their banks and inundate much of the city.

While the Westfield Athenaeum had “minimal damage,” according to Becky Blackburn, public services librarian, water was 20 feet deep on North Main Street, lower sections of Stevens Paper Mill were destroyed by water from a breached levee, and a wall of water and debris from a broken dam flooded the Clay Hill section of town, devastating Sterling Radiator in the process.

During the 50th anniversary of the flood, Jack Haywood was the lead producer for the film and noted at the time that the documentary is the story of “three horrendous days in August of 1955 as told by the people who lived through them.”

Haywood had noted the production team conducted more than 40 interviews and pored through more than 200 private photographs and reels of film donated by city residents and surrounding towns, as well as the Westfield Athenaeum.

Haywood also acknowledged the Westfield State College Department of Communications for its assistance providing television production services. Also, a grant from the Westfield City Council’s Community Preservation Committee at the time ensured that the story was captured “for all time.”

Haywood also noted during the 50th anniversary that the Flood of 1955 “remains in the hearts and minds of the people of Westfield. The film is our way of honoring them and serves as a reminder of the delicate balance that exists between the watershed and the people who enjoy its bounties.”

Since its initial release, the film – which was a “gift” from the WRWA – has been shown over the years at the Athenaeum, as well as on the Westfield Community Access cable channel.

The second library program, led by Kate Deviny, acting director at the Athenaeum, is titled “History Chat: Memories of the Flood of ’55” and is planned Aug. 21 from 1 – 2 p.m. in the Elizabeth Reed Room.

“The Athenaeum is always interested in collecting history from all sources,” said Blackburn. “Firsthand recounts are a great way to capture history.”

Deviny, who is also the Athenaeum’s archivist, echoed those sentiments.

“If you remember the Flood of 1955 we would like to hear about it,” said Deviny.

While Beverly Nielsen noted on Facebook she was visiting her aunt in Connecticut at the time of the flood, she too could share insight into the devastation that was left after the flood waters receded.

“My sister and mother were home on Riverside Drive near the river and had to be rescued in a duck boat,” said Nielsen. “Our basement was flooded … a real mess.”

For city resident Bonnie McLean who was living in Russell at the time, the flood also had an impact on her and fellow townspeople.

“The entire Main Street was flooded and totally ripped up,” said McLean on Facebook. “Helicopters had to bring in food to the residents.”

“I was living on Valley View Avenue in Woronoco and can recall a helicopter landing on the ‘big playground’ next to Strathmore’s No. 2 mill delivering food,” said Miller. “Of course, I was only 4 so can’t remember much more than that.”