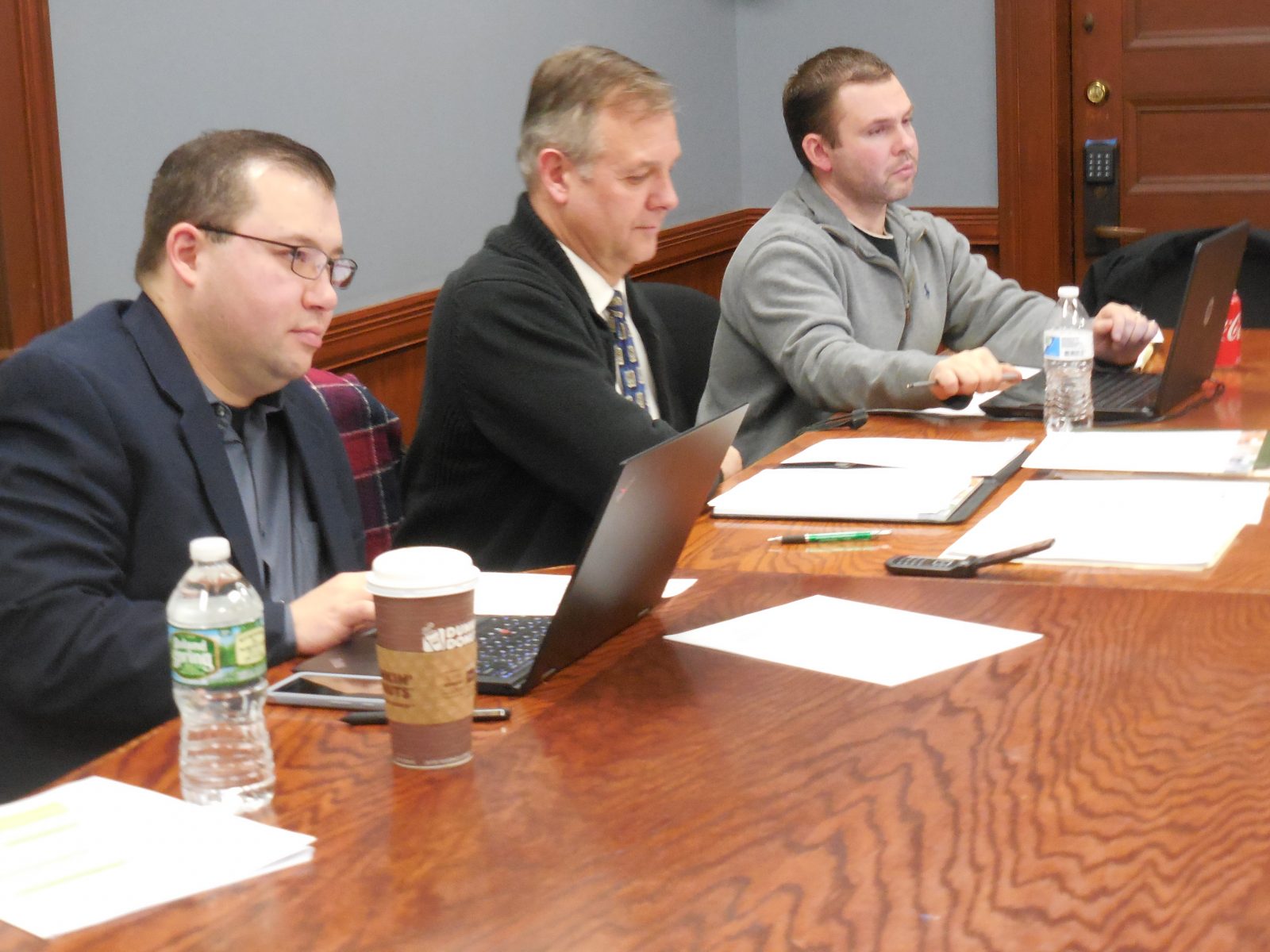 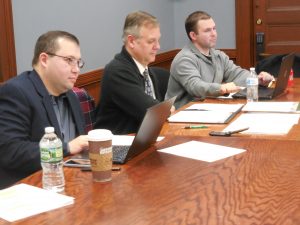 WESTFIELD – Finance Committee chair Dan Allie and Councilors Matthew Emmershy and Andrew K. Surprise met with Department of Public Works Director David Billips on Thursday to go over additional calculations for a stormwater fee increase for residential and non-residential (commercial), to help pay for a 5-year $14 million capital plan for needed stormwater work. Billips said the $14 million does not include likely grant funding.
Billips said he had been looking closely at the impact increases would have on revenue, and said that the non-residential (commercial) rates in particular, currently paying a minimum of $100 annually and a maximum of $640 annually, were low. He said the current cap of $640 means that a 14,000 sq. ft. (impervious surface) strip mall is paying the same as a warehouse business the size of Home Depot. 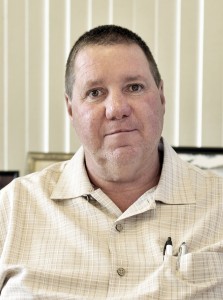 Billips recommended three tiers for non-residential rates for impervious surfaces of 10,000 sq. ft. or less, between 10,000 and 150,000 sq. ft., which he said were the majority of businesses; and over 150,000 sq. ft. He suggested raising the cap for larger non-residential businesses more equitably.
“80% of commercial properties fall between 20,000 and 80,000 sq. ft.(of impervious surfaces),” Billips said. He suggested a 50% increase in rates for residential, and a tiered system for non-residential.
The proposal would increase stormwater rates for residential, currently at $20 annually, to $30 annually for FY19, effective Jan. 1; then $40 annually for FY20, and $50 annually for FY21, when it could be revisited.
For non-residential, he suggested raising the cap the first year, and basing the payment on sq. ft. usage of .014 the first year, .02 in FY20, and .024 in FY21. He said the lower end will save money, and the city would generate a lot more money from businesses over 20,000 sq. ft. “Everybody pays the same until you get to the cap,” Billips said.
Billips recommended doubling the cap for businesses with between 80,000 and 150,000 sq. ft. of impervious surface to $1,280, and for businesses over 150,000 sf, setting the cap at $2,100. “If we do this for three years and want to revisit it, we could change the cap again,” he said.
“We want to make sure we have enough money. We have to maintain the storm basin,” Billips said. 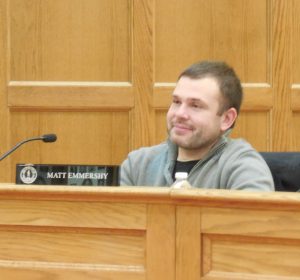 Emmershy asked if there was a reason that he included a cap for businesses over 150,000 sq. ft. of impervious surface.
Billips said there are only 50 businesses over 150,000 sq. ft. He also said the difficulty with the commercial rate is one of understanding. “For sewer and water, you’re paying for what you use. For stormwater, you’re paying for the services the city provides,” he said.
“If we’re charging people a higher rate, I want to see more people there,” said Emmershy, referring to a previously expressed need for three more employees in the department.
Ward 6 Councilor William Onyski, who was in attendance at the meeting, said he tended to agree with Councilor Emmershy, and if there were any plans to increase the cap, it should be for businesses over 150,000 sq. ft., which he said was four acres. “I would consider taking that cap off,” he said. Allie said the proposal could be amended on the floor of the City Council.
“What you’re proposing is a lot more palatable, especially for residents,” Allie said. He said the Finance Committee could pass it, and put it on the Council shared drive for the Jan. 3 meeting, where, if passed, it would be made retroactive to Jan. 1. 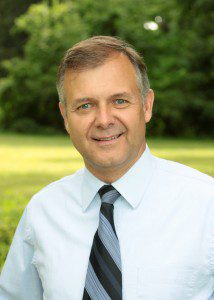 Emmershy suggested sending the proposal with no recommendation from the Finance Committee, and allowing a “spirited debate” to hammer out the details. He asked Ward 4 Councilor Michael Burns, also present, to weigh in. “You have enough information to send it to the Council,” Burns said.
“I think the plan is solid,” added Surprise.
Billips said in the meantime, he would try to get the number of properties between 20,000 and 80,000 sq. ft. of impervious surface to determine the potential income from the proposal.
“To be clear, this isn’t technically a tax increase, but it is, and I’m voting for it because it’s a public health issue and it has to get done,” Surprise said.
Emmershy asked if hiring employees would come first.
Billips said he can’t base his budget on projections, it has to be based on revenue. He said by budget time, they would have a whole quarter of income to compare with how much was generated the year before. “The sooner we get this going, the sooner we know how much we’re generating,” he said.
The Finance Committee then recommended to raise the stormwater rates by a vote of 3 to 0.