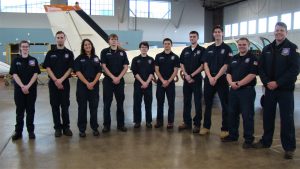 The nine seniors will graduate from Aviation Maintenance Technology, first during an FAA ceremony in the Westfield Technical Academy auditorium June 6 at 9:30 a.m., and then joining the rest of their high school class to graduate at 7 p.m. at Westfield Barnes Airport.
“We started work developing the Aviation Maintenance Technology Program in the spring of 2014 when I was the Principal at WTA. A lot of folks told us that we would never be able to get this program off the ground. That makes it even more amazing that we will be graduating our first class of students,” said Westfield Public Schools Superintendent Stefan Czaporowski. “We are extremely proud of the students and their hard work working toward their FAA Certification. Congratulations!” he added.
“As principal of the Westfield Technical Academy, I am tremendously proud of the accomplishments of our first graduating cohort from our Aviation Maintenance Technology Program. I know that they will carry their high standards of professionalism and dedication wherever they go, for they truly exemplify all of the values and virtues the Academy stands for relative to endurance, determination, and character,” said Joseph F. Langone, WTA principal.
“I would also like to thank our devoted program instructors Galen Wilson, Steve Dickenson, and Scott Hepburn for their unflagging commitment to their students, and I would also acknowledge Mayor [Brian P.] Sullivan, the members of the Westfield School Committee, the members of the Westfield City Council, and all of our business, industry, and community partners for their invaluable and ongoing support,” Langone said. 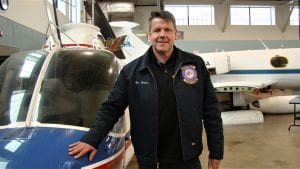 Head instructor Galen Wilson has been with the program from the beginning. Wilson said it has been a learning experience for him, too, especially coming out of the military. “I was a little rigid at first, but then saw the light. Kindness worked better,” he said.
Wilson said when he retired from Air Force, he was planning to teach social sciences. “This came up, and it was a good fit,” he said. Galen is FAA certified, and was working on airplanes and with airplanes throughout his 30-year career. This year, Wilson was awarded Aviation Maintenace Educator of the Year.
Wilson can’t say enough about the graduating seniors, who were also there at the start of the program. “I called them my guinea pigs, because I would create a lab, and think it was the best lab in the world, and they’d think it was horrible. I’d create something ok, and they loved it. They put up with all of that. This was the right class for that – they have patience with me,” he said. 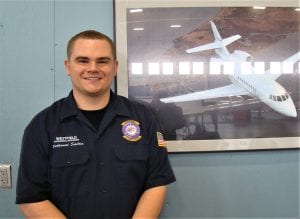 The seniors all took different paths into the program. Jared Fournier, McKenzie McCann and Nathaniel Spiller were introduced to aeronautics in the Wright Flight program at Barnes in middle school. All three were the first in their families to become interested in airplanes.
“Everything stemmed from Wright Flight,” said Spiller, who just celebrated the sixth anniversary of his first flight. Spiller now works at Rectrix in the main terminal at Barnes, doing aircraft fueling and ground handling.
Spiller is also going for his pilot’s license in Northampton at Northampton Aeronautics, where he has seven hours flight time towards his license. Next year he will study Aviation Science at Bridgewater State University. His goal is to fly as a commercial pilot.
“It’s been wonderful. It’s an amazing journey, the opportunities it has allotted me, I don’t think I could have gotten there on my own, without this school and without this program,” Spiller said. 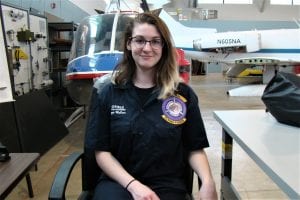 McCann said for her it started in seventh grade in Wright Flight, when they took a field trip to Space Camp in Alabama.

“Learning about everything, how airplanes fly, made me curious to see how it works,” McCann said. She said she also took inspiration from her father, who has an automotive repair shop downtown.
McCann said AMT was her goal in exploratory in eighth grade. “I knew this was what I wanted to do,” she said. She now works at Bombardier in the aircraft repair shipping and receiving room at the Hartford plant, where she delivers parts to technicians. “It’s fun, I like it,” she said, adding that she hopes to continue working there while furthering her education in Powerplant (engines) and getting her Avionics license.
McCann, like all of the seniors, had high praise for Wilson.

“Mr. Wilson goes above and beyond teaching us, making sure we have a good understanding,” she said. McCann said she is on an IEP for dyslexia and ADD, and Wilson has been extremely involved. “He goes out of his way to make sure everyone does the work to the best of their ability,” she said. 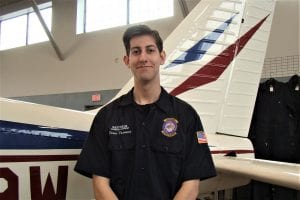 Fournier, who was recently named WTA Vocational Technical Student of the year, will be going to Wichita State University in Kansas, where he will continue his education in the aviation field as an aeronautical engineering student. He said ultimately he is interested in designing aircraft.
For Edward A. Towers and Marc Franceschet, their connection to the field began at an even earlier age.e
Towers, whose father is an avionics technician and a sergeant at Westover Air Force Base, said he has been around aviation and going to air shows all his life. When he graduated from eighth grade, he was presented with two choices – go to a prep school, or go to WTA. 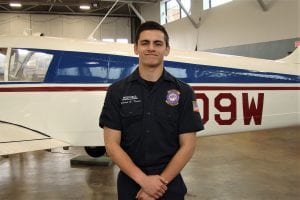 In one of his first interactions at school,  everyone was asked what their first and second choices were. “I was the only one with one choice, it was a do or die kind of thing,” Towers said.
He now has to make a choice between Embry-Riddle in Florida and Vaughn Aeronautical in New York State, where he is going to study avionics, with the goal of becoming an aeronautical electrical engineer like his dad, Gregory Towers.
“He loves the program, and admired me picking this program at such a young age. He’s always wanted to be here,” Towers said, adding that his father did visit the New England Air Museum in Windsor Locks with the class.
Towers said the program has been “amazing,” and credits it for “everywhere I’m going, and everywhere I’ve been. To watch F15’s take off every day of the week, and to work on close to $1 million machines, being in the first class – we spent our first year building this shop,” he said. 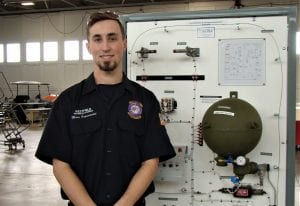 Franceschet has also been around airplanes and airports a lot. His grandfather worked at Pratt & Whitney, and his father, who he said worked at plenty of aviation places as a mechanic, is now a manager at Gulfstream and an AMT advisory board member.
Franceschet also works at Gulfstream as a mechanic on the floor. Wilson said his student got the job on his own as a standalone, and had to rise above to get it.

“I do enjoy being a mechanic, and that’s where I want to stay,” he said, although he is going for his pilot’s license in the fall.
He also wants to get into aerospace welding, and has learned of somebody who works that trade up the road. “Once out of school, I’ll be free during the day,” he said. 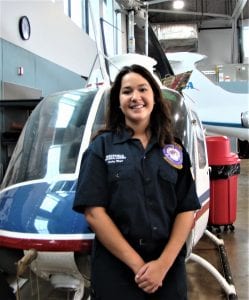 Keeley Meyer of Granville signed up for WTA with the intention of going into business management. She said the only connection to aviation in her family was an uncle in the Air Force, and a grandfather who worked at Hamilton Standard.

Meyer said she went through exploratory for this shop, and loved it. “Now I’m here, almost graduating. Everything we’ve been through since it was just a skeleton. It’s been a great experience, the first class, going through the different projects,” she said.
Still interested in management, Meyer will be attending Bridgewater State in the fall for Aviation Management. She said she’s not sure of her ultimate goal, but would possibly like to manage an airport or a mechanic shop. 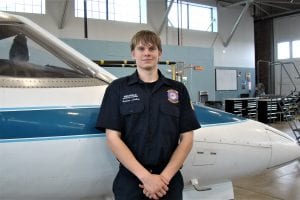 Vadim Lukin of Westfield comes from a family of mechanics, and originally went to WTA to study automotive technology or auto body, just like his three older brothers did. But then aviation popped up.

“I love planes,” Lukin said.
Next year, Lukin will be working to save some money, and then plans to go to college for aviation. He also wants to get his private pilot’s license, and possibly, his commercial license. “I’m still trying to figure out what I want,” Lukin said. “It’s awesome, a great opportunity. I love the people and Mr. Wilson. Everybody thinks it’s awesome, special, the first one in New England – a course you have to go to college to take.”
One of his older brothers is now interested in studying aeronautics. He also has a younger brother in eighth grade, who is trying to get into WTA. Although he’s not sure which pathway he’ll take, Lukin is encouraging him to sign up for AMT. 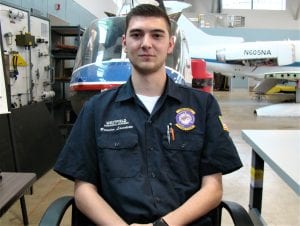 Brandon Laviolette said he grew up hearing stories about the Air Force from his grandfather, which was his only connection to flying. Now he is interested in getting his commercial pilot’s license. He came to WTA to get into AMT, he said.
“I’d like to be a pilot and also get my Airframe license, and get a job working on aircraft as well,” Laviolette said. He said he heard somewhere that “the best pilots are mechanics and the best mechanics are pilots,” which he said “kind of stuck.”  Wilson said that phrase came from Ken Dromgold, chair of the AMT Advisory Board.
Laviolette said the program opens up a lot of opportunities for aviation.

“You get to meet a lot of cool people, mechanics, and pilots. It’s a great experience, even if you’re not necessarily going to use it – as a pilot, it’s good to know. For those going straight into the workforce, it’s a free education to get an Airframe license. It’s come a long way in the past four years,” he said, adding, “We learned so much, gotten a lot closer as friends. I met a lot of people I could work closely with in the future – my own Aviation family.” 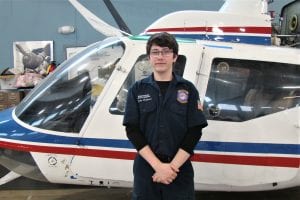 Devon Dupuis is also the first one in his family to become interested in airplanes. He said they talked a lot of about the program when he was in middle school, and he liked the exploratory.
Next year, Dupuis is interested in joining the Air National Guard, to work in the engine shop. While at the ANG, he hopes to attend Bridgewater State and obtain his Airframe, Powerplant and pilot certifications.
“If I have both my mechanical licenses, (I’d like to) work for a company where you can fly and fix planes, and be a corporate pilot,” Dupuis said. He toured the ANG base earlier this month.
“It’s a great program which brings a lot of attention to the school; hopefully, to get more money for all the shops in the school, not just our shop,” Dupuis said. He also said he is looking forward to graduation. “I love everyone here, but I want to move on, get going,” he said.

Wilson said the graduating class started with an enrollment of 14. “It’s not an easy course. If you don’t do the homework, you don’t go to the Hangar. We can’t have you touch airplanes if you’re not ready,” he said, noting that there are 15 in this year’s freshman class, which is the biggest yet, and 50 altogether in the program.
Earlier in the month, the FAA inspected the AMT program for the last time prior to graduation. “They found zero discrepancies – I take a lot of pride in that. They said they are not coming back; the students are all set,” Wilson said. He also quoted their parting words – “You need to keep doing what you’re doing. You get a gold star for your efforts.”