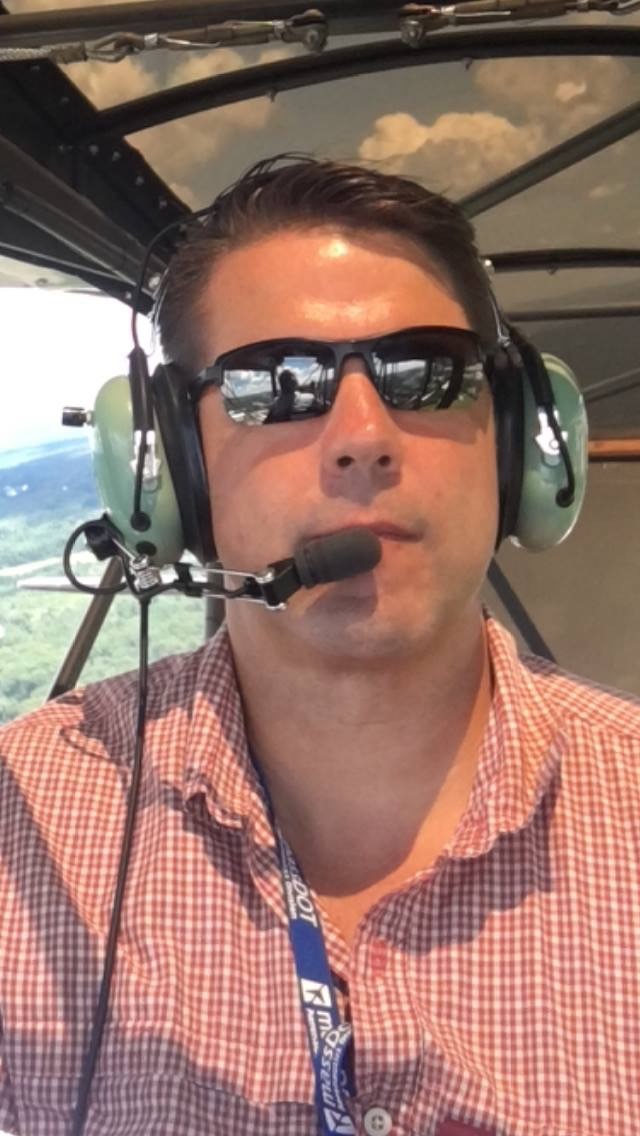 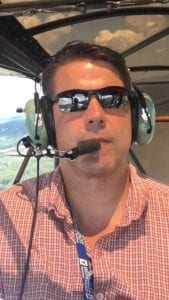 WESTFIELD – This week, Westfield Public Schools Superintendent Stefan Czaporowski sent out the following announcement: “I am pleased to announce that Aviation Instructor Galen Wilson has been named as this year’s Ivan D. Livi Aviation Maintenance Educator of the Year Award recipient. The award recognizes the outstanding achievement of an aviation maintenance technology instructor. Congratulations to Mr. Wilson!” Galen Wilson has been instrumental in establishing the Aviation Technology Maintenance program at Westfield Technical Academy, one of only three Federal Aviation Administration (FAA)-certified high school programs in the country. Over the past three years, Wilson wrote the Aviation Exploratory program, introducing new students to the field; and developed a complete ground-up FAA-certified Aviation program and all-inclusive Aviation Curriculum guide. He also wrote a complete curriculum consisting of hundreds of tasks, objectives, demonstrations and evaluations for an FAA Aircraft General Course; FAA Aircraft Airframe Course, and FAA Aircraft (Engines) Powerplant Course, the last awaiting certification by the FAA. Wilson said “it’s ready to go.” 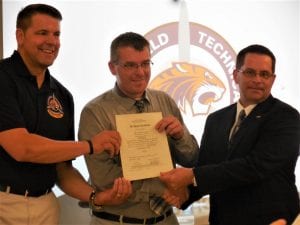 “Obviously, I think it’s a great honor for him, and we are very fortunate to have him in our district. When he’s teaching, he’s all about the students,” Czaporowski said, adding, “The kids have a tremendous amount of respect for him.”
A 30-year veteran of the Air Force, Wilson was recruited by Czaporowski and Ken Dromgold, AMT Advisory Board Chair after retiring as Chief Master Sergeant, in charge of the 104th Air National Guard aviation maintenance. “I ran that show out there, and then retired – 30 years and 71 days, retired from active duty. I have a great pension. I do this program, I teach at WTA, because I love doing it. It’s a labor of love,” Wilson said. 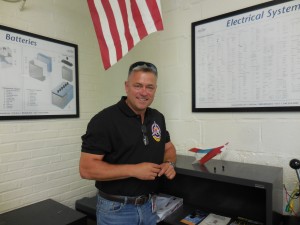 Ken Dromgold, chairman of the AMT Advisory Board. (Photo by Amy Porter)

“It’s a great thing that they’re recognizing me, but a lot of people were behind the scenes,” Wilson continued. “Stefan Czaporowski came up with the idea (of the Aviation program) and got it rolling. I can call him anytime, and he supports me. Ken Dromgold, Advisory Board Chair, helps me daily. He was an Air Force F-16 pilot, now a corporate test pilot. I have to keep up with him. Stef and Ken recruited me,” he said.
Wilson also talked about former aviation coordinator Krysten Renihan, who left last year to join the Air Force and fly C-130’s, and what a great asset she was to the program. “Krysten is now in the Air Force, at the top of her class,” Wilson said. 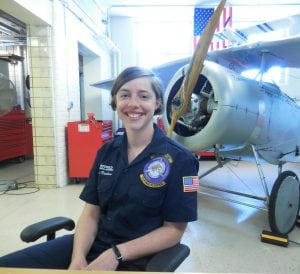 Wilson said that WTA Principal Joseph Langone has also been a great support. “Any time, he is there to help me – night and day. Just today I was texting him. I retired as Chief Master Sergeant – he calls me chief. The guidance is always there. I’m truly thankful,” he said, adding, “I am honored by this group effort. What would I have done without their support? I consider myself the architect – these guys had all the input. Without that creative thinking… It wouldn’t be fair not to recognize these people.”
As for the students in the program, Wilson said he was not surprised so much at the interest in the field, but what they’ve been able to accomplish. The AMT program is based off of a two-year program at Cape Cod Community College. The students have three and a half years to do it, but they must cover the same material as the college students.
“I wrote the curriculum and syllabus. I thought it was hard, but they do it. I was shocked at first, at the amount of homework and studying, but they’re doing it, at age 14. These aviation students are going home and studying for hours. As freshmen in high school, they are doing the same work as college freshmen,” Wilson said.
Wilson said during freshman rotation at WTA, the team chooses students for the program that are all about aviation. “Krysten and I used to look really hard. The plan she came up with, I use today,” he said. 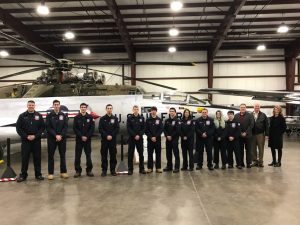 This year, ten students will graduate from the AMT, the first graduating class, out of a total enrollment in the program of 51. Wilson said initially as freshmen, they all wanted to go directly into the workforce, hoping for high paying jobs. Now, all but one is going on to a four-year college, “now that they know they can do it,” he said, adding that the one who isn’t enrolling in college, wants to get into the workforce and then continue his studies.
“I call my seniors the guinea pigs. I’ll try a lab project on them, and keep the ones that work,” he said.
Seniors will graduate with AMT certification under Air Frame, and their general studies done. Wilson said they also had Introduction to Power Plant (engines) and have competencies in that area. One student is going to Embry-Riddle Aeronautical University, and will be receiving more than 30 credits from the program. “It’s pretty amazing; he’s going to a 4-year college already as a sophomore,” Wilson said.
The AMT program just completed the strands for the Massachusetts Teacher Educator Licensure, which Wilson called a lot of work. “I wrote it, Krysten wordsmithed it, and Joe (Langone) did the crosswalks, relating it to math and physics.” Wilson said it’s completely done, and sitting on Department of Elementary and Secondary Education (DESE) Commissioner Jeffrey C. Riley’s desk for final approval. “Now that that’s done, we can do the FAA Power Plant certification. The curriculum and syllabus are written, and the worksheets are all done. This program is ready to go,” he said.
Wilson said one holdup is that the FAA is backed up, due in part to the government closure, which he said “threw them into a tailspin.” He said normally, the FAA inspects the program four times a year.
There are 15 students in the freshmen class this year, and a total of 51 in the program, with three instructors including Wilson. Wilson said they are limited by the FAA to 28 students in alternating weeks; one week for freshmen and seniors, and the other for sophomores and juniors. But, he said, with the Hangar 2 classroom being done and in use, the FAA may change that number. 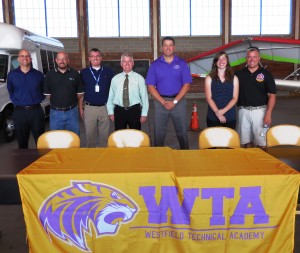 “We have one of three FAA-certified programs in the country because of him. He’s a big reason for the success of the program. He put so much time and energy into that program, because he wants it to be successful,” Czaporowski said.
Wilson said he was notified of the AMT Educator of the Year award by Crystal Maguire, Executive Director of the Aviation Technician Education Council. He will be getting an all-expenses paid trip to the national conference for three days in Wichita, KS in March. There he will mix with 150 CEO’s and General Managers of companies like Boeing, Cessna and Lockheed Martin. “I’m going to meet all these people,” Galen said.
When he does, he said he will talk to them about the team that supported him and the caliber of the students at Westfield Technical Academy. “These kids are good. I want to share that with the nation,” he said.