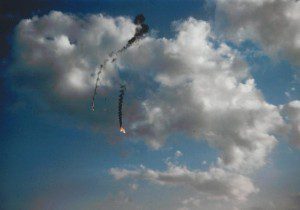 This photo was taken by Alfred Seher of Westfield moments after a mid-air collision of two F-86s on October 19, 1952. It was given to Mark Perez of East Mountain Country Club. the site of the crash, by his son, Bob Seher.  (Photo by Alfred Seher)

WESTFIELD – Sixty years ago, on Oct. 19, 1952, two men lost their lives in an accident thousands of feet above the property where East Mountain Country Club is now located.
Lt. Robert H. Danell and Capt. Fred H. Stevens were both decorated war veterans and members of the United States Air Force stationed at Westover Air Base. The men were performing air stunts during a ceremony to commemorate new facilities at the 104th Barnes Air National Guard when something went very wrong. The pilots were flying F-86s and when they flew into a line formation, they collided.
At the time, East Mountain Country Club was farmland and overgrown forests. However, East Mountain owner Ted Perez was there and saw it happen. Just 20 years old at the time, he never forgot the tragedy he witnessed and told his son Mark about it many years later.
Mark Perez remembered the story, but it wasn’t until 1990 when he became more curious.
“We were building a new fourth tee and we found a .50 caliber machine gun,” said Perez. “I wanted to know more.”
Perez searched the web and found a site that gave more insight into the accident. He also found a lighter engraved with Stevens’ name on the property and began searching for more clues.
“I went out into the woods with a metal detector,” he said.
Perez found pieces of the wreckage – including .50 caliber rounds and parts of the F-86s – while searching the woods, and displayed his findings during a meeting of the Pioneer Valley Military Transportation Museum held at the country club.
It was because of that meeting that Perez found the greatest connection to the two pilots that he could have ever hoped for.
“Mark Danell found me actually,” said Perez.
The museum produced an article about the meeting and Perez’ findings and his search for answers about the accident.
Robert Danell’s son found out about Perez’s investigation and emailed him. The two men learned from each other and formed a fast friendship, or, perhaps, a kinship.
Perez has since come to know the Stevens family, as well, and last year Mark Danell and Charlie Stevens visited the place where their fathers lost their lives.
“It’s amazing what the Perez Family has done for all of us,” said Stevens last year during the private tour of the site. “This is something that my wife and I wanted to do for a long time. I wanted to see where it all took place and it answered a lot of questions. We learned more about my dad in the last few months than in my whole lifetime.”
Danell added, “A lot of this (accident) was just put in the back of my mind. When I read the article about the crash, it brought it all back really fast. It was like fast-forwarding a tape recorder. I was excited, anxious and nervous coming out to see the actual crash site where my dad spent his final moments. I finally have closure.”
To commemorate the 60th anniversary of the accident, a monument bearing the names of the two men, a brief description of the tragic event, and an excerpt from the poem “High Flight,” will be dedicated Oct. 20.
Perez said the monument is made of black granite and is shaped like the tail of an F-86.
“It’s very unique,” he said.
The Perez family hopes the public will attend the dedication, which takes place at 1 p.m., and learns about this piece of Westfield’s history.
“I think this is part of our history that has been forgotten,” he said.