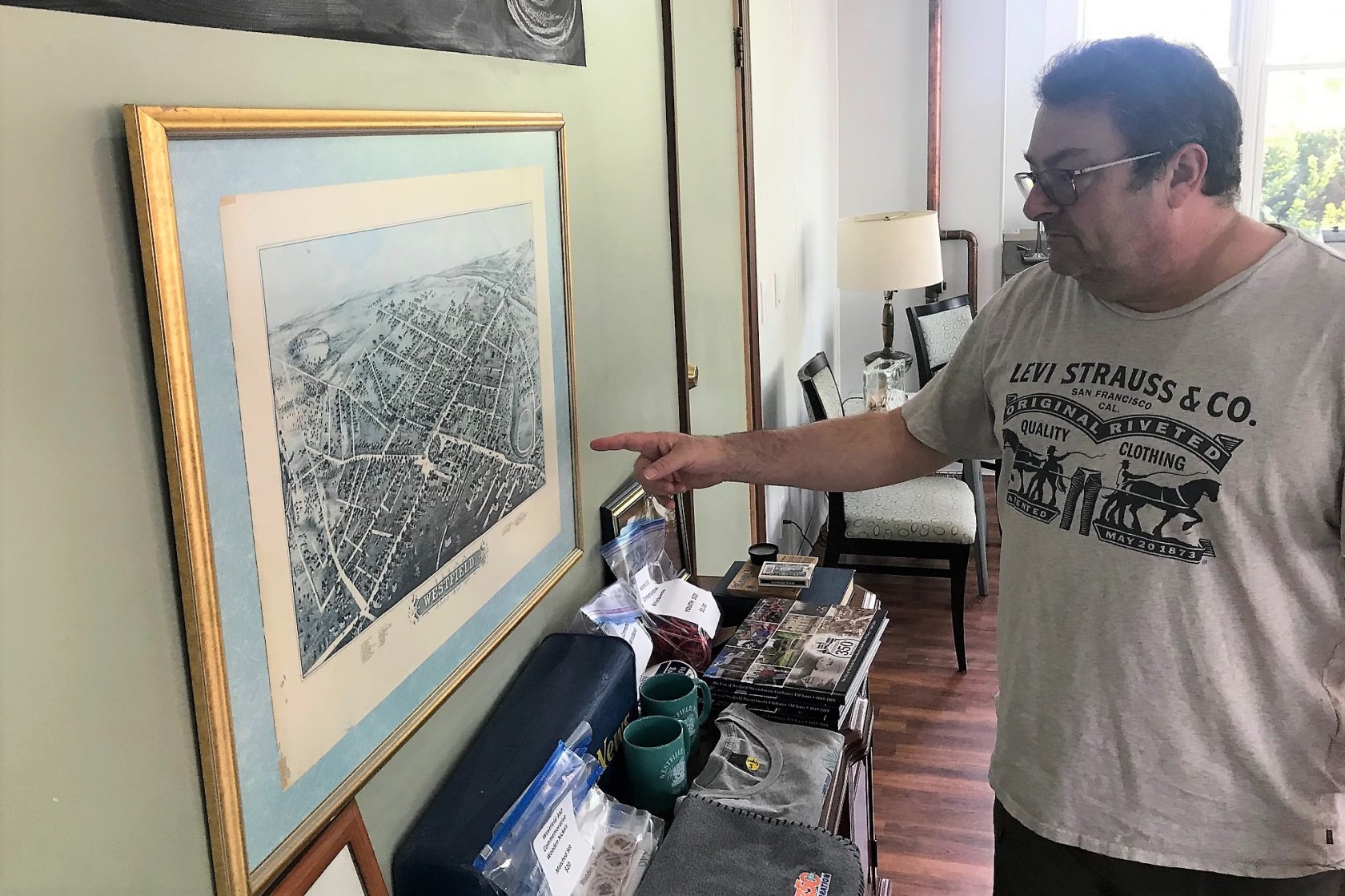 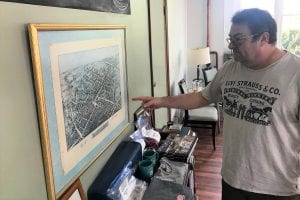 Arthur Bousquet points to an old map in The Westfield News office May 16. Bousquet led the 1969 parade as a 9-year-old cub scout and moved away at age 17. He has returned for the 350th celebration and will participate in the parade once again. (Hope E. Tremblay Photo)

WESTFIELD – The city’s 350th birthday celebration has turned into a reunion for many former Westfield residents.

Carol (Tryon) Tebow says no matter where she lives, Westfield will always be her hometown.

The city native moved to Oklahoma in 1974 for a job and a change of scenery and returns to Westfield a few times a year.

Tebow is among the thousands of visitors expected to flock to the city for the Westfield 350th anniversary celebration this weekend. Although Tebow was already home this year – with plans to return in the summer and fall — she said she didn’t want to miss out on this milestone celebration.

Tebow said the parade and giant cake were what stood out from the 1969 events, and what she looked forward to this time around.

“The cake is almost exactly like the one they had 50 years ago,” she said of the giant lighted cake in Park Square Green..

“I still have postcards and calendars from the 300th,” she said. “And we have a video of it, too.”

Arthur Bousquet spent his formative years in Westfield, moving at age 17 to join the military. Although he never moved back, he said Westfield is where his heart resides.

“This is my hometown,” he said.

Bousquet returned to the city for the 350th at the special invitation of Westfield 350 President Harry Rock.

Bousquet and his childhood best friend David Cowart led the 300th anniversary parade in 1969 and will once again help Westfield celebrate its birthday at the head of the parade.

Bousquet said he was thrilled to be in the parade again, but even more excited to see his old pal.

“Dave and I did everything together,” he said. “He moved to Feeding Hills and we remained friends, but when I moved away, we lost touch. I am most excited to see him again.”

The friends reconnected through the 350 events. Bousquet lives in North Carolina now and Cowart resides in Indiana. They haven’t seen much of each other since they roamed the Paper Mill neighborhood as children.

Bousquet said he lost touch with many of his childhood friends over the years, but did remain close with his neighbors – the Murray family.

“Joey Murray and I spent a lot of time together growing up,” he said. Noting that sadly Joey passed a decade ago and his father, who still lived on Paper Mill Road, died this spring.

Bousquet has returned to Westfield several times over the years, mostly for weddings and funerals. He has family in surrounding towns and when he visits them, he always takes a ride through his hometown. His wife Linda and their children accompanied him on those trips, and he would take them down memory lane, always driving by his childhood home and his favorite school – Fort Meadow.

“The first time I came home was a long time ago – about 35 years,” he said. “It was so different. Some things were built up and others torn down. I hardly recognized it.”

Bousquet said although he has lived most of his life outside of Westfield, he keeps coming home.

“There’s just something special about the flavor of this community,” he said.

Bousquet said he remembers the diverse cultures in the city.

“There were four major groups,” he said. “I grew up in the Italian neighborhood, and there were the Irish, the French and the Polish. And everyone got along.”

Another thing that Bousquet said was special growing up in Westfield were the different churches where everyone was welcome. He said there was always something to do and friends to play with.

Bousquet said he worked in the city’s tobacco fields as well as The Westfield Evening News. He said he and his family have traveled a lot and lived in many places, but Westfield will always be home.