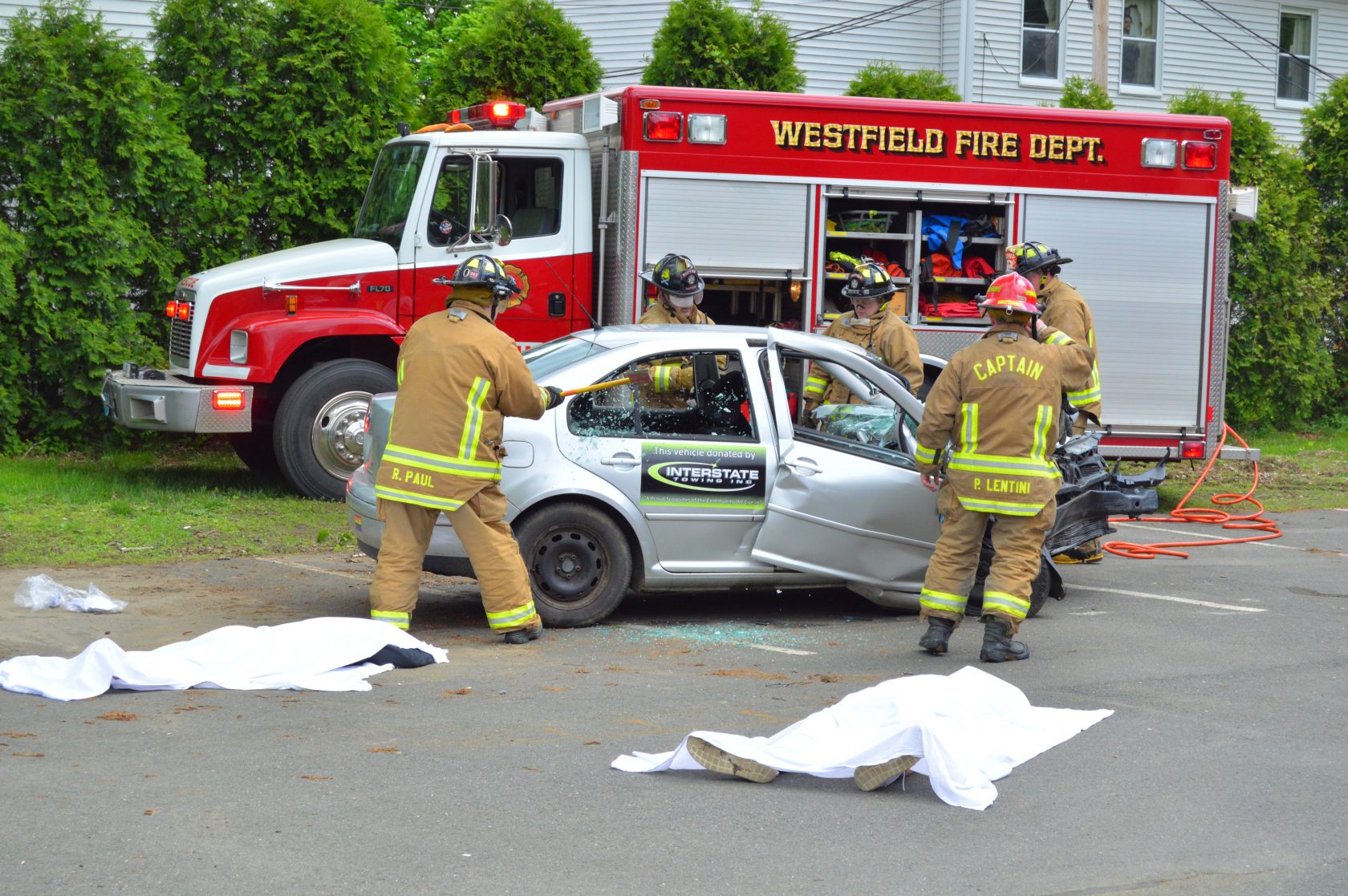 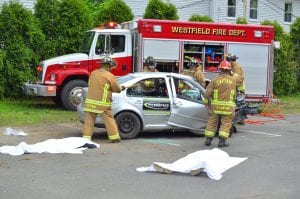 Westfield firefighters begin working to get into the vehicle as if there was still a victim trapped inside. The firefighter on the left can be seen breaking one of the back windows with his axe. The two sheets on the ground are covering two of the students while they wait for the funeral home hearse to arrive. (Photo by Peter Currier)

WESTFIELD- Students from St. Mary’s High School were shown a mock car crash Thursday morning outside their school as a way to warn them about the dangers of intoxicated or distracted driving.

Firefighters from the Westfield Fire Department, members of the Westfield Police Department and representatives from Firtion Adams Funeral Service teamed up to display the aftermath of a drunk driving accident. Interstate Towing donated an older Volkswagen Jetta that had been in a front-end collision. Student volunteers from St. Mary’s played the roles of the victims and the driver in the aftermath of the crash.

“We don’t want to let people like you die,” said Firefighter Ray Neilsen, “They do not come back. This is not a video game. They die from drunk driving.”

The preceding scenario for the crash was that a group of six students piled into the Jetta on their way to prom and their driver had been drinking. Nobody was wearing their seat belt when the car struck an object or another vehicle head-on. Some of the kids were ejected from the car and two of them were killed. The six students took their positions and waited for their classmates to come outside. When they arrived, Neilsen gave a speech that outlined the dangers and statistics around driving under the influence. 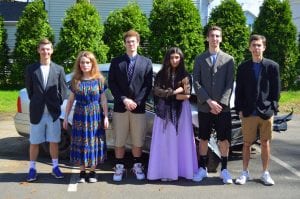 Neilsen said that the number one cause of death for teenagers aged 16 to 19 is car crashes. This includes crashes caused by drunk driving, driving under the influence of drugs and distracted driving. He added that 1,500 people under the age of 21 die each year in these kinds of crashes. One-third of those deaths occur in the time period between April and June, which is prom season for most schools.

In a survey conducted by the American Automobile Association (AAA), it was found that 54 percent of people who go to prom consume upwards of four drinks throughout the night. Neilsen and a police officer at the scene discouraged the kids from drinking at their prom Friday night, but noted that they are aware that it will likely happen anyway. Their message to those who choose to drink was for them to be responsible. They encouraged students who chose to drink to have a plan to get a ride from a sober driver, and to call their parents for a ride if they’re in a situation where that is not possible.

Neilsen noted that another survey revealed that 84 percent of kids would rather drunkenly drive home themselves  than call their parents and risk getting in trouble. He urged both children and parents to have the kind of relationship where the kid feels like they can call for help and not face punishment for it. 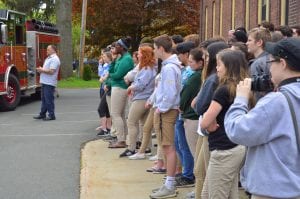 The rest of the St. Mary’s High School Seniors look on while the first responders handle the crash. St. Mary’s Principal Matt Collins can be seen on the left. Collins delivered a similar message to that of Neilsen, as he wants all of his students to get to and from prom safely. (Photo by Peter Currier)

“I gave my kids a get out of jail free card to call me,” said Neilsen, “I can say that you will be in trouble if I find out you drove drunk or knowingly got in the car with a drunk driver.”

While Neilsen spoke, the volunteer first responders began acting as they would in the event of a real crash. The firefighters and EMTs began assessing the students and treating them accordingly. The two fatalities were pronounced dead and covered with sheets. The two students playing the role of the fatalities patiently waited on the pavement for the staff from Firtion Adams to pick them up.

One student was given a neck brace, and the driver was given a field sobriety test by the police officer. As this was happening, Neilsen told the crowd that the consequences of drunk driving go beyond life and death. Those who survive may be permanently injured and will have to deal with that for the rest of their lives. The drunk driver, who often survives such crashes, will face crippling legal trouble that will plague them for years. Of course, the families of all the victims will have to face the consequences as well. 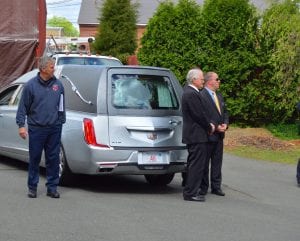 Firefighter Ray Neilsen (left) observes as the other firefighters continue to work on the vehicle. The Firtion Adams representatives seen on the right had just cleared the two ‘fatalities’ from the scene. (Photo by Peter Currier)

“It has happened here in the past. We don’t want it to happen to any of you tomorrow night,” said Neilsen.

After the students were moved away from the vehicle, firefighters began using the jaws of life, cutters, and axes to get into the car as if a victim was still trapped inside. The jaws of life is a hydraulic tool that allows first responders to bend the metal of the cars door and frame to rescue trapped occupants.

Neilsen said that this is the first time in a long time that the fire department has done a mock crash like this. He added that he hopes to do more of these in the future with the other high schools in Westfield. Even if it is not prom season, he said, they can convey the same message and specify distracted driving habits like texting or talking on the phone.