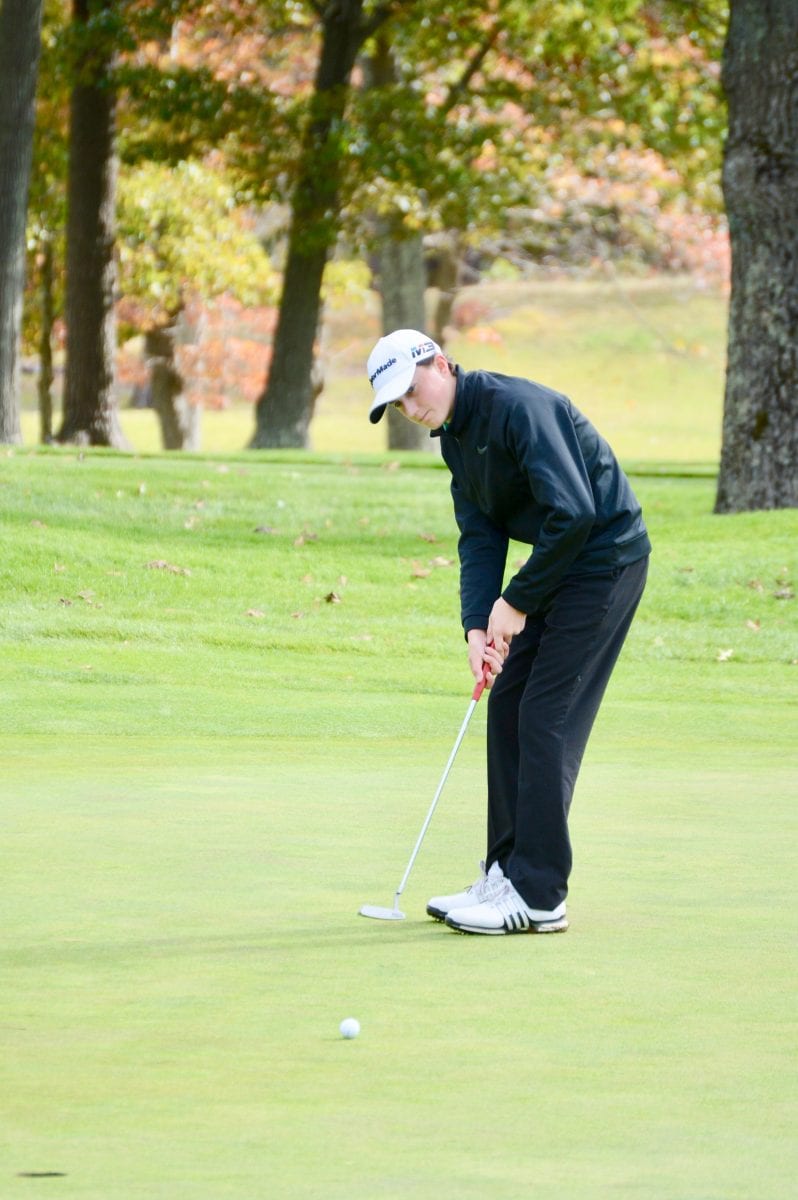 MARSHFIELD – Often times, when an underclassman makes a big play in a high school sporting event you may likely here chants of “he’s a freshman!” from the student body.
It may have been quite a bit quieter at the state Division 2 golf championships Tuesday – considering the sport and venue (out along the eastern seaboard) – but there sure were whispers surrounding this freshman’s class act.
Southwick freshman Matthew Garrity finished as Western Massachusetts best, shooting an 80 and tying for 19th atop the leaderboard at Marshfield Country Club. Central Catholic’s Josh Lavallee claimed first with a 74. 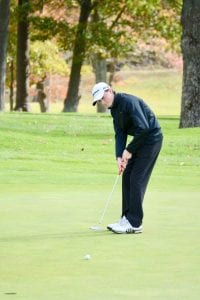 Southwick golfer Matthew Garrity watches his putt approach the hole for a birdie on the par-4 17th at Marshfield Country Club. (Photo by Chris Putz)

“It’s a gift,” the freshman phenom said, regarding the tools he used to get to where he finished. “I’ve worked really hard to maintain it.”
Last season, Garrity experienced the ultimate team high as Southwick soared to a championship, but this season, as the lone returning starter, he carried the weight of the Rams.
Like it or not, he was the go-to guy, even as an underclassman.
Garrity averaged a 39.9 during the regular season with a match record of 11-3-2.
Seven others saw varsity action, including juniors Ben Cleland (51.0 average), Ryan Laferriere (56.2), Noah Harriman (58.9), and Noah Zahner (61.8), sophomore Ian Lemieux (64.7), freshman Jesse Johnson (51.1), and eighth grader Matt Coviello (61.3).
Together, Southwick forged a 3-13 record, losing several close matches, including a one-stroke loss to Division 1 foe Belchertown. The Rams took on several strong D1 programs, such as Amherst, Northampton, and East Longmeadow.
The weather also proved to be a challenge with 12 matches either postponed or re-scheduled due to poor playing conditions.
“The season was plagued by inclement weather,” Southwick coach Joseph Whalen said.
Still, there were some shining moments like when Garrity and Cleland tied for second place (72 – 2 over par) in a 28-team field at the Pioneer Valley Interscholastic Athletic Conference 2-man best ball tournament at Oak Ridge Country Club in Agawam.
At Western Mass., Garrity shot a 79 to tie for second place, setting the stage for his state championship run.
It was a rocky start for Garrity as he started with an eight on the par-4 12th hole. After a decent drive, Garrity attempted to draw his second shot around the trees on the left side, but left the ball in a really bad lie. His next shot fell short of the green into the bunker. The next one went over the green. Then came a three-putt.
“It was a rocky start … but you can’t dwell on that type of stuff,” Garrity said. “It happens. I just moved forward. I knew I had 17 holes of golf left. That’s a lot of chances, a lot of birdies, and I pulled through.”
Garrity picked up some momentum a short time later when he birdied the 17th. He also had a birdie on the fifth hole.
“Considering the course conditions and how tough they were, I did pretty well,” Garrity said.
“I want to be one of the best in the state,” he said. “I’m going to strive for that next year.”
The sensational freshman is well on his way.
Just last Sunday, Garrity finished first in the U.S. Kids Tour Championship with a 79 on the par-73 at Fairview, and now moves on to the World Championship at Pinehurst.
Garrity, who credits area golf instructor Drew Michaels with helping improve his game over the course of the last three years, was also named The Westfield News MVP of the Week late Monday as determined by the newspaper’s Facebook Page poll.
JUNIOR VARSITY: Southwick’s junior varsity golf squad was comprised of juniors Cameron Collins and Dakota Wood, freshman Christian Bach, eighth grader Brandon Bergeron, and seventh grader Isabella Ronzoni.