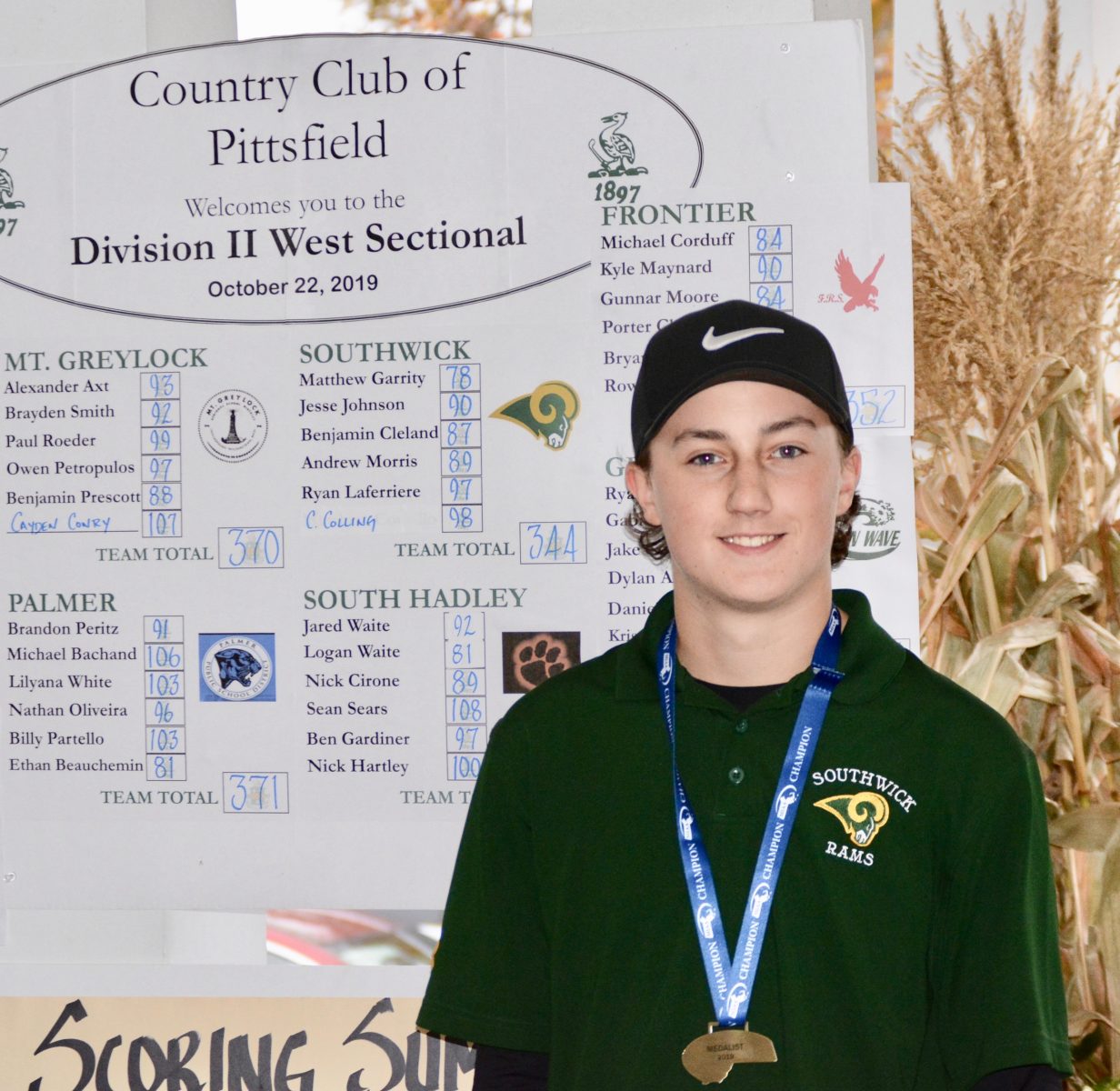 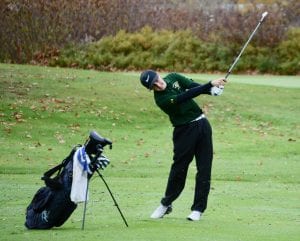 Southwick’s No. 1 golfer, sophomore Matthew Garrity takes aim at the second hole, his first of the day following a shotgun start at the Western Massachusetts Division 2 Championship at Country Club of Pittsfield. (Photo by Chris Putz)

PITTSFIELD – Southwick sophomore Matthew Garrity flubbed his first five holes of the West Division 2 Golf Sectional at Country Club of Pittsfield on Tuesday. Much like the Rams during their regular season runs, Garrity completed an overwhelming recovery.
Garrity flabbergasted the competition, winning the West D2 individual championship title with an 18-hole round of 78 and leading Southwick to a second-place overall team finish.
“I had a game plan coming into today and I tried to stick to it the whole day,” Garrity said. “The first five holes were pretty rocky but I got back on track. Once I hit the back nine, I had one bad hole but I kept my head up, kept grinding.”
Once Garrity began hitting the fairways and greens more cleanly, his scores began to drop tremendously. 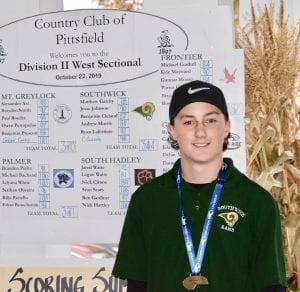 “After the sixth, seventh hole, I said to myself ‘I’ve got to put the pedal down, this is the going to be the hole I’m going to slow down and stick to my game plan, which was fairways and greens. I had a great drive, hit straight to the center of the green. If I hit the center of the green, I normally two-putt for par.’”
The icing on the cake was a birdie on the 18th.
Garrity had nearly a half-dozen opportunities for birdies with the ball lying in the 10-foot range, but several times he had to settle for par.
“There’s definitely a lot of strokes out there that I could have gotten back,” Garrity said. “I’m happy with my overall (effort) but I know I can do better.”
That’s a scary proposition for all the golfers at next week’s state competition at Taconic Golf Club in Williamstown.
At Western Mass, three other Southwick golfers shot a 90-or-better with Benjamin Cleland (87), Andrew Morris (89), and Jesse Johnson (90) leading the way. Rams’ Ryan Laferriere and Cameron Collins finished with a 97 and 98, respectively. Collins replaced Matthew Coviello, who was scratched from the competition after suffering an unspecified injury during a final practice round.
“I think the way the kids were playing the last few weeks, I’m slightly surprised (by the results) but not shocked,” Southwick golf head coach Joseph Whalen said.
There were some signs that Southwick was on the verge of a breakout.
This season, while Garrity improved his play by two strokes from a 39 average to a 37, others like Cleland and Laferriere improved by four strokes, and Johnson by three. Morris held the team’s third-best scoring average. Coviello, who was forced out of the lineup due to injury, was also solid for the Rams during the regular season.
If that was not enough proof that a return among the region’s best was just around the corner, every Southwick golfer finished under 50 in the last two rounds of the season.

BOYS SOCCER
Agawam 6, Westfield 0
Westfield suffered a shutout at the hands of the Agawam Brownies Tuesday. The Bombers, who tied Northampton, 0-0, last Friday, will now need to beat Belchertown this Friday night at Bullens Field at 7 p.m., and hope East Longmeadow ties or loses to Agawam to get into the tournament.

FIELD HOCKEY
Southwick 1, Mohawk 0
Happy Senior Day!
Senior captain Emily Martin scored the lone goal on an assist from senior Alex Grimaldi, and Southwick escaped with a thrilling victory.
The offense was started off on a free hit by Grace Brockbank. Quick passes by the middies worked the ball into the circle, where Grimaldi was waiting. Grimaldi’s quick stick work helped her gain possession for Martin for the finish.
Marisa Coviello had another stellar day in defense with her fourth defensive save of the season. Clare Stratton finished with 11 saves.
In JV action, Southwick landed a 1-1 tie with a goal from Sam Pitnoiak. 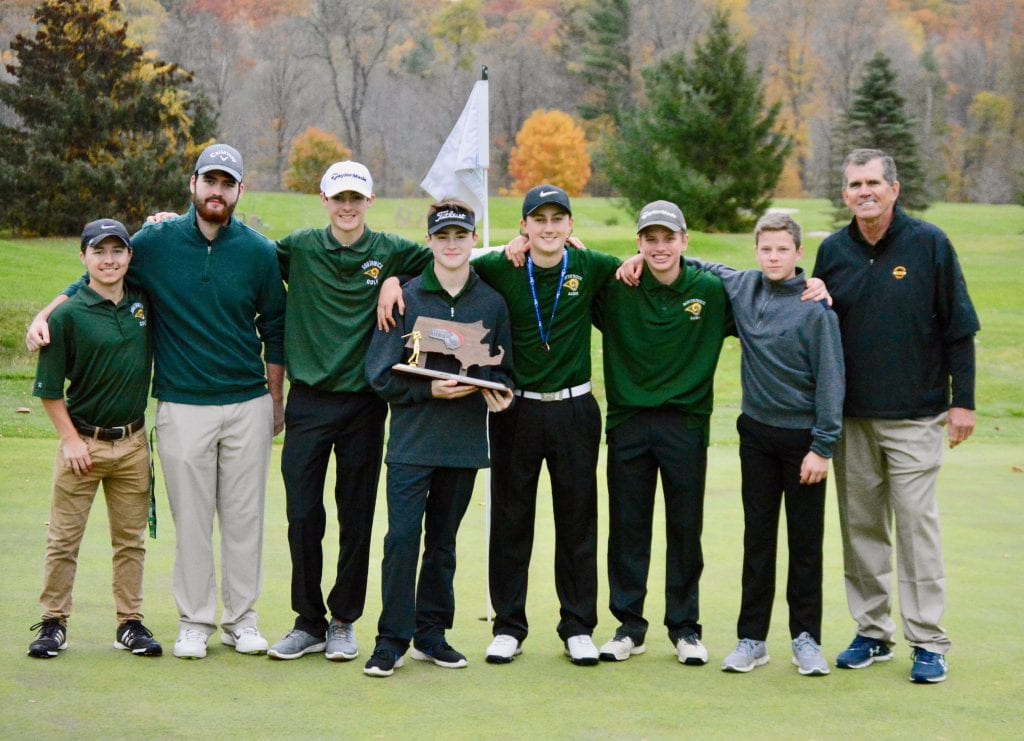