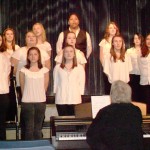 The Gateway Show Choir sang a moving rendition of the “Grown-Up Christmas List” for the Gateway District School Committee at their meeting last night.  (Photo by Amy Porter)

HUNTINGTON – In what some members of the School Committee called their favorite meeting of the year, members of the Chester-Littleville Chorus, the High School Show Choir and Concert Choir, and the High School Jazz Band performed pieces from their upcoming concerts for the Gateway District School Committee and other fans on Wednesday night.
The first performance was by the Littleville members of the Chester-Littleville Chorus, whose songs included “Walkin’ in a Winter Wonderland,” under the direction of Elementary Music Teacher Paul Sawyer.  The Chorus, comprised of students in grades 3 and 4, will perform on Friday, December 16th starting at 6:30 p.m. in the Gateway Performing Arts Center. The concert is free of charge, and will include a bake sale and student art show. Audio CD’s of the Chorus will also be sold for $5 each on the night of the concert. Proceeds will help support the 3rd Annual GatorRoo Music Festival next spring.
The High School Show Choir then sang a moving song entitled “Grown-Up Christmas List. – No more lives torn apart/That wars would never start/And time would heal all hearts/Every man would have a friend/That right would always win/And love would never end/This is my grown-up Christmas list.”
The Concert Choir followed, singing “Amazing Grace” and “Stuck like Glue.” Both Choirs are directed by Jerilyn Beauregard, Vocal Music Director for grades 8-12.
The Jazz Band wound up the performances with “Norwegian Wood,” “Up on the Rooftop,” and a rousing  rendition of “Soul Man,” featuring piano, saxophone, electric guitar and drum solos.
The Show Choir, Concert Choir, Jazz Band and Concert Band will present their concert on Monday, December 19th, starting at 7 p.m. in the Gateway Performing Arts Center. Admission will be $2 at the door, or $1 plus a canned good for the Huntington Food Pantry. There will be a raffle and bake sale at intermission to raise funds to support the music program at Gateway. The snow date will be Tuesday, December 20th.
Following the performances, the school committee reconvened their regular meeting in the library. Worthington Finance Committee member Gretchen Eliason gave a presentation on Chapter 70 of Massachusetts General Laws which she said “is the major program of state aid to public schools.” She encouraged school committee members to familiarize themselves with the laws in advance of budget preparation which begins early in 2012.
School Committee Chair Beth Brett of Chester then opened the meeting for comments from committee members. Shirley Winer of Chester noted that lately the roads leading out of Huntington, mentioning Basket Street in particular, are littered with trash.  She suggested organizing a student clean-up of the roads.
Dr. David B. Hopson, Gateway Superintendent, then spoke about recent and upcoming meetings of the CT Valley Superintendents Roundtable, of which he is president. He noted that the Gateway High School Jazz Band performed for the roundtable in the December meeting, and were well received.  He also invited School Committee members to join him at the January 6 meeting for a talk by Michael Widmer, President of the Massachusetts Taxpayers Association, who Dr. Hopson referred to as “one of the premier seers about what’s going to happen with the state budget.”
Dr. Hopson also said that he has had three-quarters of a million dollars in requests for additional items in the budget in three main areas. The first is to expand behavioral programs in the district. The second is to somehow equalize the student to staff ratios of Chester and Littleville Elementary Schools, which can be done only by adding staff members to Chester, reducing staff in Littleville, or redistricting, and telling students where they must attend.
The third area which needs addressing is for items that are beyond their life expectancy, according to Dr. Hopson.  He mentioned the phone and video systems in particular.  He said replacing the phones alone will cost anywhere from several hundred thousand to half a million dollars.
Business Manager Stephanie Fisk announced that Gateway is off bottled water, and off the water emergency.  She said they now have some bottled water in storage, “thanks to generous donations from four or five different companies.” Fisk said they are waiting for final bills from the water testing company and the water operators, but that she expects the total bill for the water main break to be $30,000, as projected.
Wendy Long, Gateway Public Relations Officer, announced that in addition to the Holiday concerts, Chester Elementary School will be holding a Story Fest on Friday, Dec. 23 at 1:30 PM at the school in Chester. The event will be the culmination of a Stars Residency Grant of $5,000 with storyteller Rona Leventhal. At the Story Fest, younger children will tell a collective story, and older students will tell individual stories they have created. The public is invited to attend.
Long also reported that Gateway has received a $15,000 Perkins Rural Communities Grant for vocational training that will be used to upgrade or replace welding equipment at the school.
Before convening to an Executive Session, Chairperson Beth Brett asked Wendy Long to convey the gratitude of the School Committee for the performances by the Choirs and the Jazz Band.