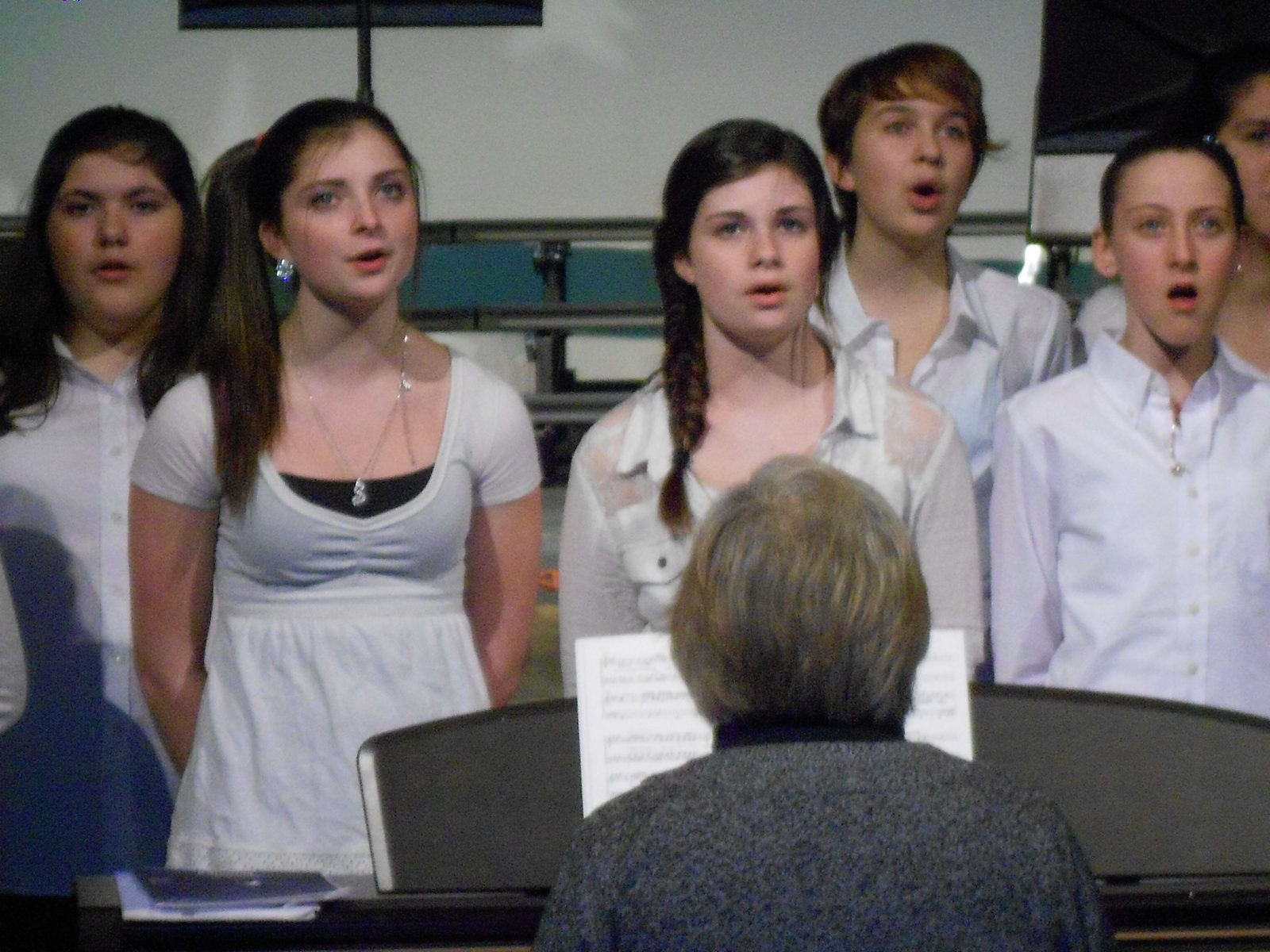 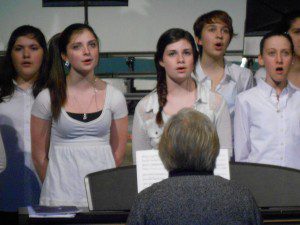 The Gateway Regional High School and Show Choir performs a preview of their upcoming concert for the School Committee. The Senior High Holiday Concert will be held Monday at 7 p.m. in the Performing Arts Center. (Photo by Amy Porter)

HUNTINGTON – Wednesday’s Gateway Regional School Committee  featured Gateway’s new High School Principal Jason Finnie highlighting student achievement in the high school and junior high school.
Recent activities included a Junior High Awards Assembly, and a new store opened by the Student Council on Wednesday which was reportedly “packed.” New courses include a multi-media production course, sports management, a “Body and Brains” crossover course which incorporates art and physical education, and a new “Introduction to Video Production”. Finnie also complimented the student-run Gateway News Broadcast which offers weekly updates highlighting student activities.
Music teacher Beth Guertin asked the school committee to reconsider the recent field trip policy requiring double occupancy rooms with single beds. Guertin said that the new policy has increased the costs prohibitively, reducing student participation in the trips. Last year’s eighth grade trip also changed from Washington, D.C. to Philadelphia due to increased costs.
Dr. David Hopson said the policy changed under advisement of legal counsel that each student should have his or her own bed. Four-room occupancy usually provides double beds. The school committee suggested changing the policy back and having parents sign off. Ron Damon, Huntington representative, also said that students who were uncomfortable sharing a bed could bring a sleeping bag or air mattress. Hopson said students with medical needs would also be accommodated. A motion was made, and the school committee voted to return to a four-to-a-room policy.
Ellen Hirtle, representative from Russell, reported on the school committee’s mid-year Superintendent Evaluation survey. Hirtle said they had posted the survey online, but only received seven responses from the sixteen members. Hirtle asked if they had trouble accessing the Google Docs, didn’t have the time, or didn’t have the interest in returning the survey.
“This is one of our major jobs as a school committee, to evaluate the superintendent,” school committee moderator Beth Brett of Chester added. “We really need to have 100 percent participation.”
Several committee members admitted they did have trouble completing the online evaluation. After a brief discussion, Brett asked Angela Burke, Gateway’s Director of Technology, to plan a Google Docs training for the school committee in the spring before the next scheduled evaluation. The survey responses will be posted on the Gateway District web page at grsd.org.
Hopson handed out a memo in response to the evaluation and asking for clarification and action from the school committee. He said the three main areas of concern after reading the surveys involved the budget, standardized test scores versus educating the “whole child,” and ongoing discontent surrounding Worthington seeking withdrawal from the district. He asked that the school committee set a budget parameter and then support a budget that falls within the parameters, reach consensus on developing goals for student achievement, and finally focus on the present in regards to Worthington by making the current arrangement the best it can be to meet student needs.
Hopson also distributed a budget fact sheet, saying, “I’d like the school committee to give me some parameters before we propose a budget. Where do you want the leadership team to start?”
The fact sheet revealed that a level service budget, one that would keep existing student services, would mean a $500,000 increase to the district, due to an increase in current staffing costs, and also out of district placements, which are forecast to increase in cost by $240,000. Hopson said due to an expected teacher retirement, the real increase may be closer to the projected 2.5 percent increase level of $411,000.
Several school committee members expressed their wish to start the budget at level services for the students.
“I say this every year, that we need to come up with the best services for our students, not the towns, and that starts with level services,” said Ellen Hirtle of Russell.
Ruth Kennedy, also of Russell countered, saying, “Money doesn’t grow on trees. We’re supposed to be working with the towns.”
A motion to start the budget process with level services for students passed by a slim majority.
“What’s been difficult the last couple of years is having the administration come up with a budget that is well thought out,” Hopson said. “and then we can’t get twelve people on the school committee to vote for it.”
Moderator Bet Brett said the school committee has to set district goals, such as “are we a school committee that wants to encourage the whole child, or just push academics and MCAS?”
Brett suggested that the committee bring written goals to the next meeting on January 9.
“There are days when I can’t figure out which school committee I’m working for,” said Hopson. “the one that wants to level fund services, or the one that wants to cut the budget for the towns.”
The meeting began with a preview of the upcoming Senior High Holiday Concert set for Monday at 7 p.m. in the Performing Arts Center. Admission will be $2.00 or $1.00 with a canned good for the Huntington Food Pantry. The high school Jazz Band, Show Choir, Concert Choir and Concert Band will all perform. Featured guests are the district’s second graders, who will perform “The Grinch Medley” with the Concert Choir and Show Choir.
The jazz ensemble, minus a few members absent for sports activities, performed “Let it Snow” and “Holiday Musical Entertainment,” under the direction of Beth Guertin, High School Music Teacher. A combined Concert Choir, Show Choir and Grade Seven Choir then sang “Corner of the Sky” and “A Blessing.”