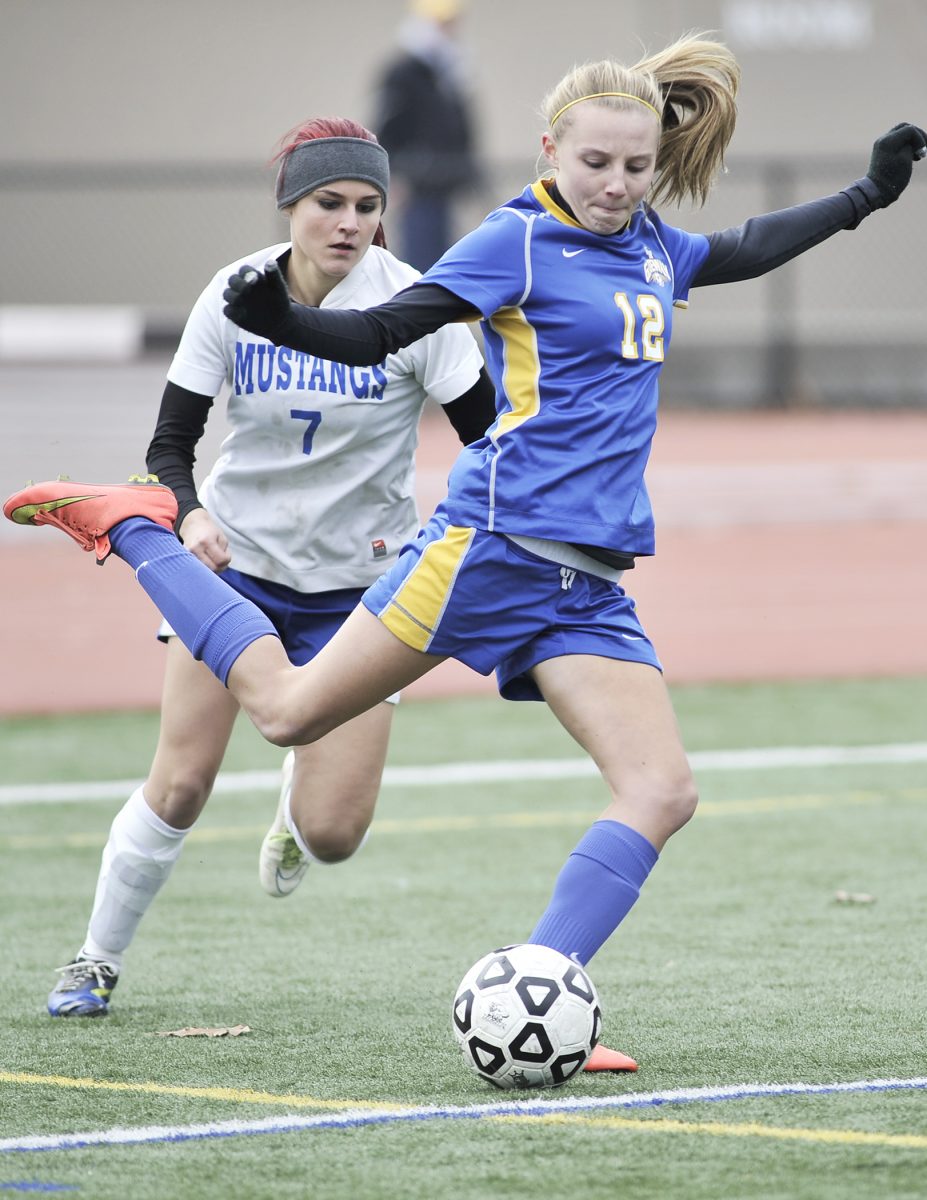 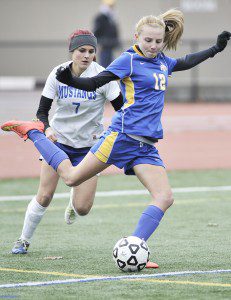 Gateway freshman forward Jessica VanHeynigan , foreground, snags control of the ball as Monson junior Allie Zollo follows during the first half of the 2014 MIAA Div IV West Sectional at Westfield State University. Monson went on to win the title 2-0. (Photo by Frederick Gore)

HUNTINGTON – Stability is the key when it comes to Gateway Regional High School’s soccer program.
Longtime coaches Steve Estelle (varsity girls) and Tim Gamble (varsity boys) have been fixtures on their respective soccer teams for nearly a decade now. The only newbie, so to speak, is Gators’ athletic director Matt Bonenfant.
Even that does not tell the entire tale.
Halfway through the 2014-15 school year, Gary St. Peter departed as the school’s AD, giving way to Bonenfant, a Gateway gym instructor and Junior Varsity girls’ soccer coach. He has also served as the Gators’ head softball coach for the last few seasons.
“Enough with the administrative stuff,” said Bonenfant, who has spent the last two months fine-tuning the fall sports schedule, and everything associated with it. “I can’t wait to get the kids on the field … and play.”
“I’m excited in seeing our new players,” he added. “The seventh, eighth, and ninth graders.”
Fans will get their first chance to see, not only the underclassmen, but the entire girls’ soccer team Tuesday, September 8 when Gateway hosts Mahar, beginning at 6 p.m. The Gators, fresh off consecutive Western Massachusetts Division 4 finals appearances – they lost to the Monson Mustangs in 2014 and 2013 – will seek to take the next step this season.
The boys’ soccer team, who have qualified for the postseason each of the last six years, takes the field one day later, September 9, against the Panthers at Legion Field in Palmer at 7 p.m.
After an off day, Gateway girls’ soccer returns to action Thursday, September 10 against Renaissance at Marshall Roy Field. The boys’ soccer team, after a day of rest, plays host to Granby, Friday, September 11 at 6 p.m.
The cross country regular season will open mid-September.