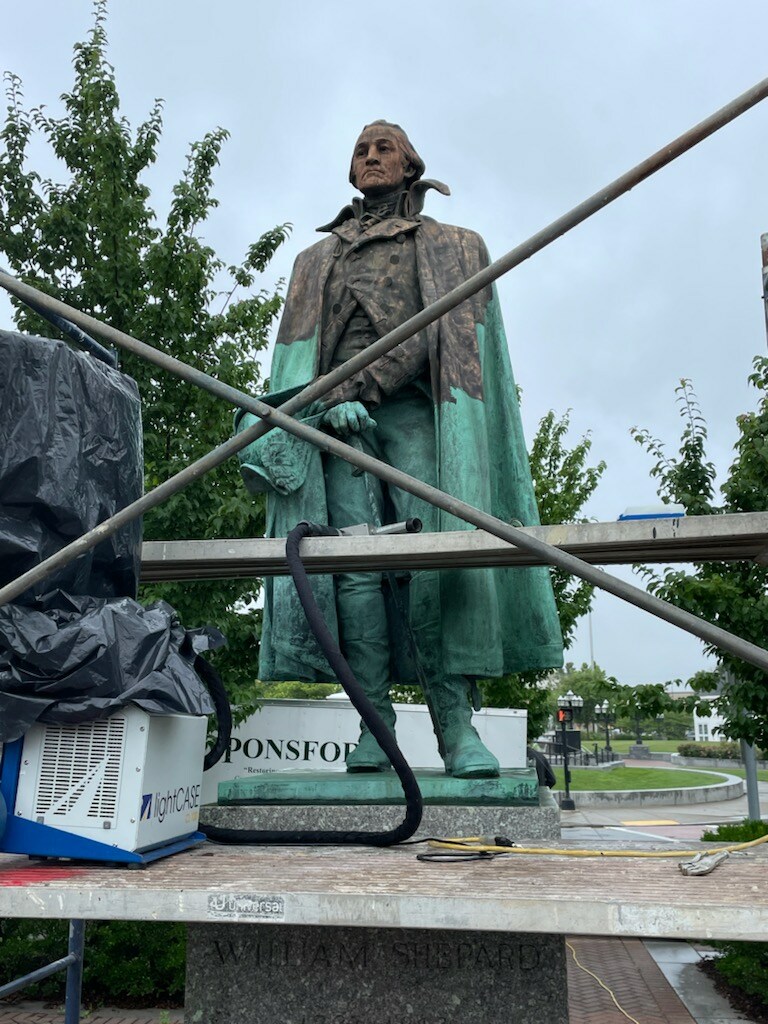 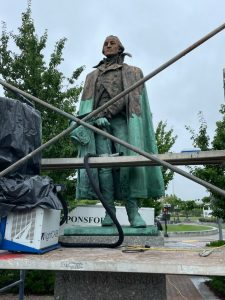 The Gen. William Shepard statue was restored to its original colors over the course of the July 4 weekend by Gordon Ponsford, who will work on other copper-based monuments in Westfield over the next week. (PHOTO SUBMITTED BY CINDY GAYLORD)

WESTFIELD- Residents may notice something different about the Gen. William Shepard statue by Park Square Green after it was restored to its original colors over July 4 weekend.

Gordon Ponsford of Ponsford Ltd. out of Atlanta, Georgia came to Westfield this week to restore some of the metal monuments in the city that had been discolored over time. He was seen standing on scaffolding around the statue treating it with a wax stain and a blow torch throughout the weekend.

Westfield Historical Commission Chair Cindy Gaylord said that Ponsford would move on to Parker Memorial Park, Pinehill Cemetery, and the Civil War monument at Park Square over the course of the next week. She said this restoration was organized by Chief Graves Officer Gene Theroux, who did not respond to a request for comment by press time.

Statues like the Gen. Shepard monument often appear as a light green color after they have been standing for a long enough time. This is because the copper in the statue slowly oxidizes over time, creating the green patina layer around the outside of the metal.

This process famously occurred on the Statue of Liberty, which was originally a shiny bronze color before the patina began to form from the oxygen, water, and carbon dioxide in the air around it.

The Gen. Shepard monument actually did not turn green on its own, according to the written history of the statue on the City of Westfield website. It was built in 1917, and had not oxidized by the 1940s, to the concern of some officials. The Park Commission investigated the statue and found that it had a rather low amount of copper due to shortages in World War 1 when it was built, thus slowing the process of the statue forming a patina.

In 1951, an acid was applied to the bronze to intentionally give the Gen. Shepard statue the green color it had worn until this week.