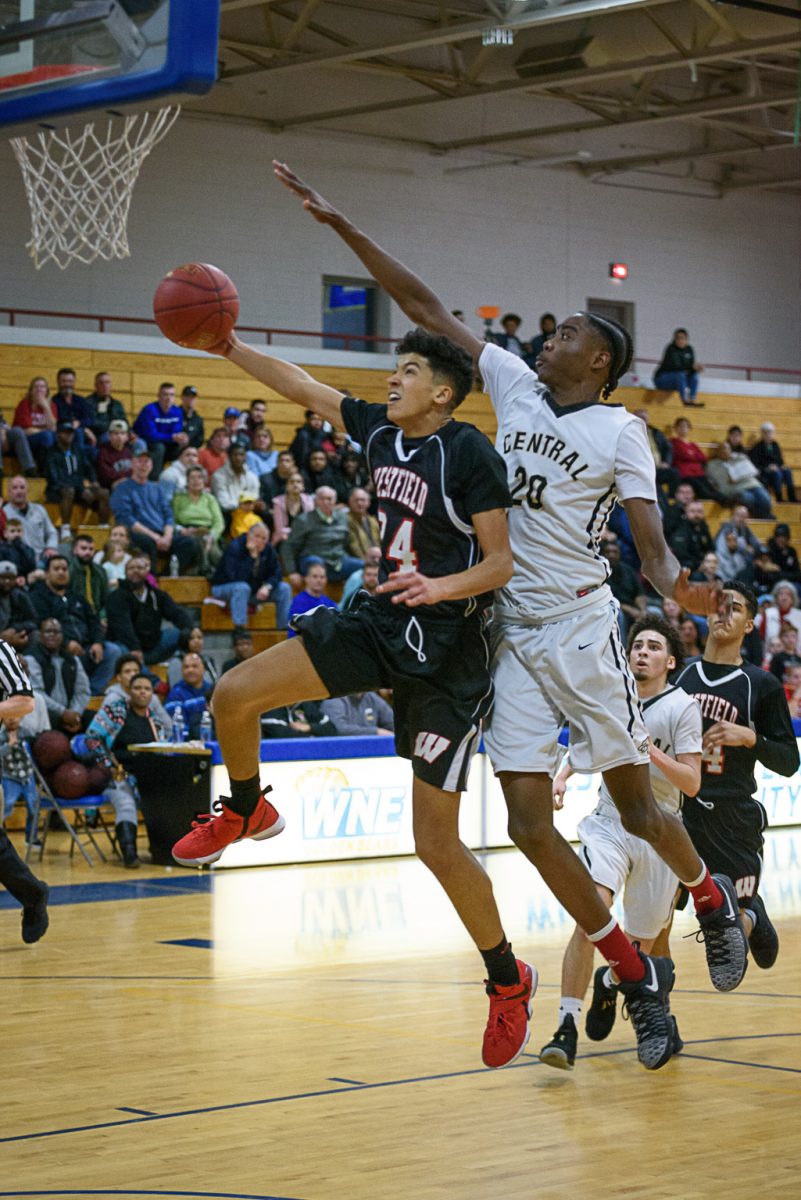 WESTFIELD – In the beginning, it was billed as a “David vs. Goliath” matchup, and figured to be as tough as a 16 seed beating a 1 seed in March Madness.
In the end, the undefeated, unbeaten Central Golden Eagles spread their wings and soared past their opponent for the 21st straight time this season.
Senior guard Justin Feliciano and senior forward Jorge Torres Vizcarrando scored 17 points apiece to lead No. 1 Central past fifth-seeded Westfield 67-48 in a West Division 1 semifinal Tuesday night at Western New England University.
“We didn’t make our shots tonight, and they’re very talented,” Westfield coach Josh Balestracci said. “We gave it everything we got.” 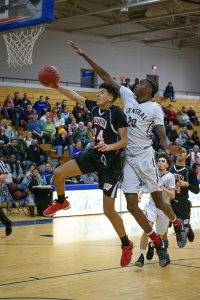 Westfield ran into the teeth of the Central defense several teams, and the Golden Eagles 6-10 senior center Justin Easterling, 6-9 junior center Hason Ward, and Vizcarrando – no slouch himself at 6 feet, 5 inches – clamped down time after time after time again.
“I’m not very surprised,” said Westfield senior guard Javi Santos, “They’re big guys, athletic. …It was very hard to get a shot over them.”
Westfield managed to get off a couple of 3-pointers early in the contest – Kam Wells broke a two-minute scoreless streak for both teams, draining a three for Westfield 2:20 into the first period. Mike Hall’s shot from beyond the arc gave the Bombers a 6-5 lead a short time after. Aidan Dunn’s 3-ball stopped a 7-0 spurt by Central at the end of the first quarter.
Central (21-0) pushed its lead to double-digits late in the first half with a 13-4 run. The Golden Eagles led by nearly 20 points midway through the third quarter.
One play in the third quarter symbolized the kind of effort it would take for 32 minutes to have a chance to beat Central.
Santos dribbled to the foul line, leapt off his feet in traffic, and with hands waving in his face, he hung in mid-air a split second longer than his nearest defenders, and rattled in a beautiful jump shot.
It took a flawless effort to beat the defense. To ask the Bombers to do that over and over and over again would be doing nearly the impossible.
Central protected its commanding lead until the very end.
“Coming in my senior year as a leader and team captain, that really put the responsibility on me,” said Santos, who responded with a team-high 17 points. Dunn finished with 15. “This season meant so much.”
Westfield finishes the season with a record of 14-8, a league title, and just one victory short of a finals appearance.
“We set our goals for a 10-win season,” coach Balestracci said. “Then we got into the tournament, we set our goals to win a league title. These kids played really hard. They’re really unselfish players.”