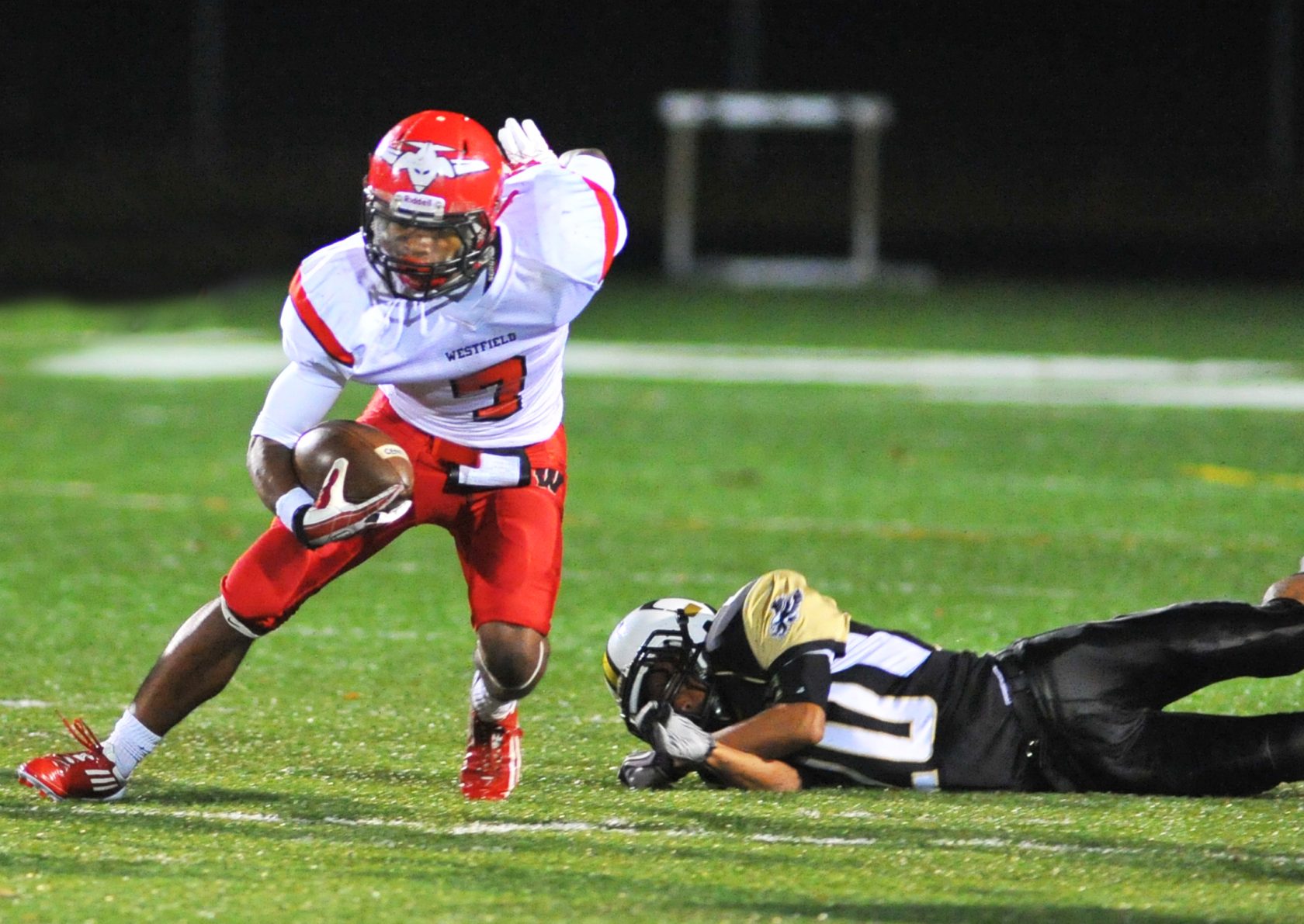 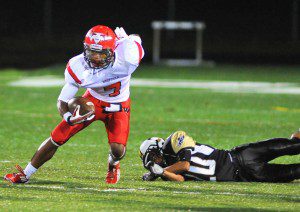 SPRINGFIELD – There is a new top dog, or rather bird, among Western Massachusetts high school football teams.
Central senior quarterback Cody Williams scored five touchdowns (3 rushing, 2 passing), and the Golden Eagles swooped in to win the AA Conference championship with a 52-14 win at Berte Field Friday night.
Central (7-1) came out firing on all cylinders.
Opening at the Westfield 40 after a stalled Bombers’ drive, Central needed just five plays to reach the end zone. Senior quarterback Cody Williams rolled out on a 5-yard keeper and dove across the goal line just inside the right pylon for a 6-0 lead with 8:52 remaining in the first quarter.
After a penalty set back Westfield (7-1) on its second drive – leading to a surprise 3rd-and-long punt – Central scored on another short, 5-play drive. The Golden Eagles made it 12-0 when Williams scored on a sneak with 3:18 left in the quarter.
On Westfield’s third possession, the Bombers nearly drove the length of the field only to have the drive end with an interception. Junior halfback Cody Neidig had two long runs (18, 15).
Central turned primarily to the air on the next drive with pass plays of 16, 23, 4, and 13 yards, the latter of which resulted in a 19-0 lead with 9:40 remaining in the first half. The extra point made it 20-0.
On its next series, Westfield finally found the end zone. It took the Bombers just five plays, including a big 25-yard run from Ben Geschwind, and an 8-yard touchdown run from senior quarterback Jake Toomey.
Westfield’s defense stepped up next, stopping Central’s offense for the first time. The Golden Eagles punted and the Bombers took over on their own 14.
Westfield drove 85 yards in 11 plays – Neidig had a 39-yard run – and appeared poised to swing momentum in its favor. But Central stopped the Bombers 4th-and-goal run with just inches to go for a touchdown with 2:13 left in the half.
The Golden Eagles scored two touchdowns in an 87-second span just before the half to take a commanding 33-7 lead. Senior halfback Troy Morrow scored on a 74-yard sprint to the end zone with 1:39 remaining, and Williams connected with senior wideout Traveis Dykes on a 17-yard passing strike with 12.1 ticks left.
Early in the third quarter, Central widened the gap. The Golden Eagles capped off a 6-play, 71-yard drive with a 13-yard touchdown run from senior running back DaQuan Clemons with 10:08 on the clock. The score was 39-7.
Westfield responded.
On the following possession, Westfield’s Rashaun Rivers nearly took a kickoff to the house. A shoestring tackle kept him from scoring. The Bombers took over on their own 45. Seven plays later, Toomey found senior tight end Garrett Fitzgerald wide open in the front corner of the end zone for an 18-yard touchdown pass with 7:39 left in the third quarter. After the extra point, the Bombers trailed 39-14.
Westfield’s defense made a big stop on 4th-and-2 from the Bombers’ 35. The team’s offense reciprocated with a conversion on 4th-and-one. An interception finally ended the drive, and any hopes of a comeback.
Williams added a 41-yard touchdown run late, and sophomore cornerback Tyreque Estrada-Crapps returned an interception 50 yards for a TD.
The victory ensured Central of the top seed in the state’s new playoff system. Westfield is number two.