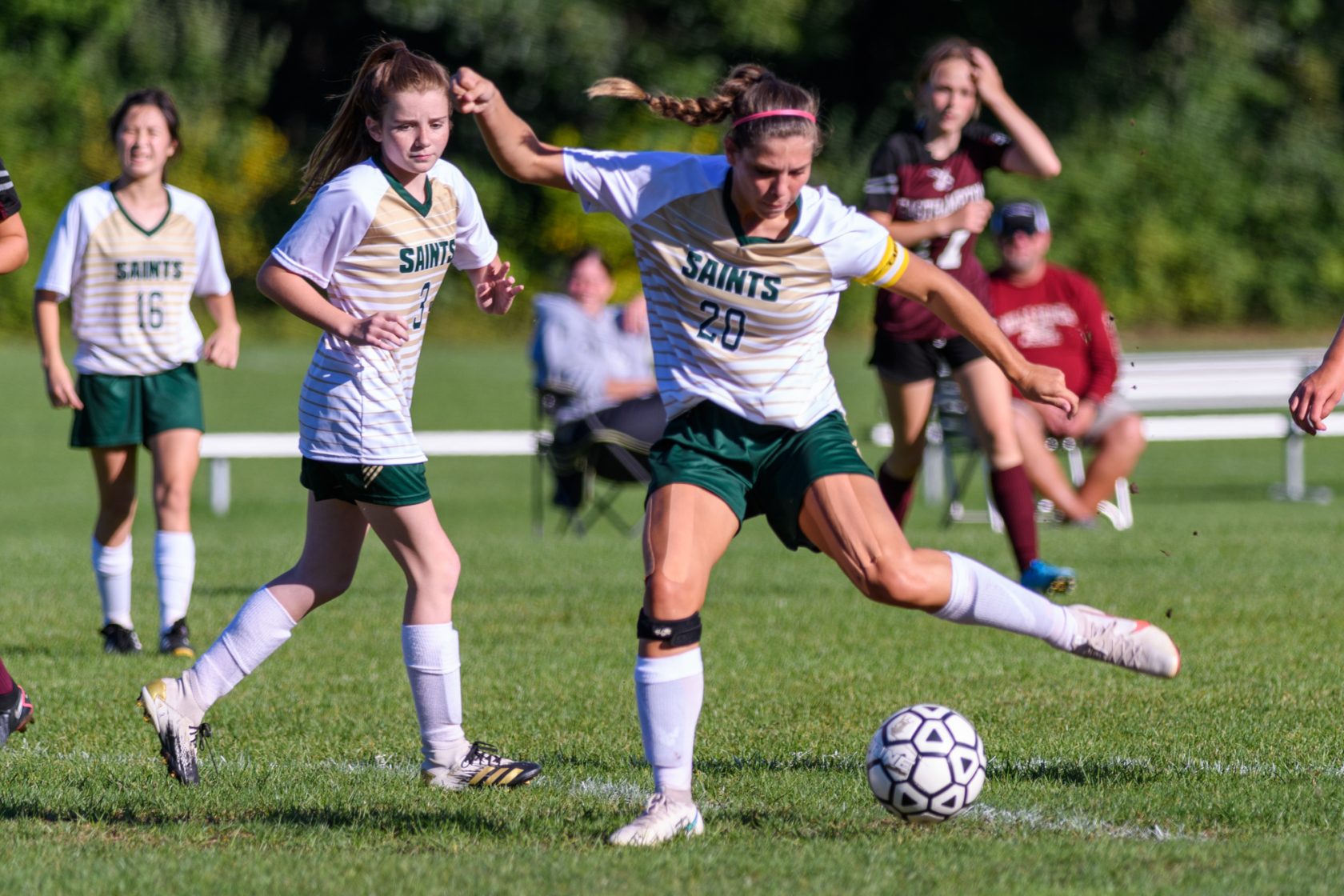 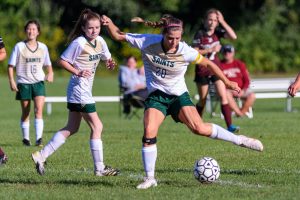 EASTHAMPTON – It’s hard enough for opponents to stop one Goodreau sister. But when both of them are working toward one common goal, it is becoming apparent that is too much for the opposition to overcome.
St. Mary’s senior Allie Goodreau set up her younger sister, Emma, for the game’s only goal en route to a thrilling 1-0 Saints’ victory over the Easthampton Eagles Friday at Nonotuck Park.
The goal came with 19 minutes remaining in the second half.
“I was in the middle of the field trying to get open, trying to get an opening, trying to get through,” Allie said. “That’s what we’ve been doing all season. Try to find the gaps, play the ball through and see what we can really do. …I sent it through like I’ve been doing all season and luckily she was there to get it.”
Emma went for the ball in the box, made a move around the Easthampton goalie, and delivered her shot. The Eagles defense tried to react, but the ball found the back of the net.
“When one of the defensive players went back to try to play goal, (the ball) went right through her legs,” Emma said. “I was like ‘oh.’” 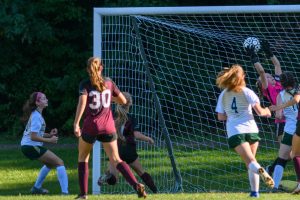 On the first of three consecutive corner kicks awarded to Easthampton, St. Mary’s goalie Amelia Willenborg rises up and pops the ball out of danger. (BILL DEREN PHOTO)

It was the 97th point of Emma’s high school career.
Easthampton made a renewed effort to score in the final minutes, earning consecutive corner kicks and delivering shot attempts but St. Mary goalie Amelia Willenborg and the Saints prevailed.
“Our mentality going in was we knew they wanted to beat us so how can we come out stronger,” Allie said, noting the team’s last-minute win over Easthampton a year ago. “We knew we had to stay on top of the ball and kind of keep going. We all mentally knew what we had to deal with and just went from there.”
While much of the game is a mental grind, Allie knows the physical toll that it can have too. The senior forward lost much time to injuries during her high school career.
“I’m hoping this year for no injuries,” Allie said. “The game is physical …but mentally we need to stay stronger.”
The bond between the two sisters is one that no opposing team can break.
“This season I came in with the mentality that I want (Emma) to get (her 100th point) before I go,” Allie said. “She’s goal hungry, she wants the ball, she wants to score, and that’s the mentality you need to have when you go to do that.”
Although any player can easily lose sight of the team goals when trying to reach individual accomplishments, Allie said there is no reason to worry that Emma will fall into that trap.
“She’s not only looking to score herself,” Allie said in describing her sister’s run for 100, “she’s looking to set other teammates up and that’s what we need.”
Allie knows exactly what her sister is going through – – she scored 100 points as a sophomore two years ago.
“You have to put yourself second and think about how can I better the team first,” Allie explained. “And then through that, kind of just put yourself in the background. Obviously, you can’t be selfish but when the opportunity comes in front of the net you’ve got to take it. …It’s working as a team first, and then yourself second.”
Willenborg finished the afternoon with nearly a half-dozen saves for her 12th straight shutout.

Tigers silence Beavers
Westfield Technical Academy 2, Putnam 0
Allyssa Slack scored on a penalty kick after a hand ball in the box. Later in the second half, she scored again on a ball sent from defender Nella Kondratuk and Westfield Tech held on for a shutout against Putnam at Marshall Roy Field.
“I’m super proud of my team today,” Westfield Tech girls soccer coach Lyle Washington said. “After facing Smith the day before, we unfortunately had a very shallow bench with some injuries but my girls played hard holding Putnam to just three shots on goal.”
Westfield Tech goalie Lindsey Deland (3 saves) earned the shutout.

FIELD HOCKEY
Rams post shutout
Southwick 3, Turners Falls 0
Three different players scored one goal apiece – – Devan Fox, Gabby Smigiel and Alyssa Jacob – – and Southwick shut out Turners Falls on the road Friday. Avey Glynn had two assists.
“The team did well to find their energy and keep up the fast pace game after having a tiring week,” Southwick field hockey coach Jenn Oakland said. “I’m really proud of the way they fought through adversity this week. Fridays are always a tough game day, especially if it’s the third game of the week but the team really dug down and fought hard to be dominant in the game.”
Southwick goalie Ezri Johnston (3 saves) recorded a shutout.

BOYS SOCCER
Bulatov scores, assists in Tigers shutout
Westfield Technical Academy 2, Hoosac Valley 0
Adam Strycharz set up David Bulatov with a great feed, and scored unassisted in the second half to lead Westfield Tech past Hoosac. Tigers’ goalie Liviu Mocanu had a few key saves toward the end of the game to preserve the shutout.
Westfield Tech freshman Logan Gendron and Sean Johnson have developed a connection in the midfield that is paying dividends, Tigers coach Kyle Dulude said. Freshman Owen Carpenter and Mason Jaquier have also made tremendous contributions off the bench, he added.
“It’s definitely a positive environment,” coach Dulude said. “The guys are really coming together and enjoying our time together.”