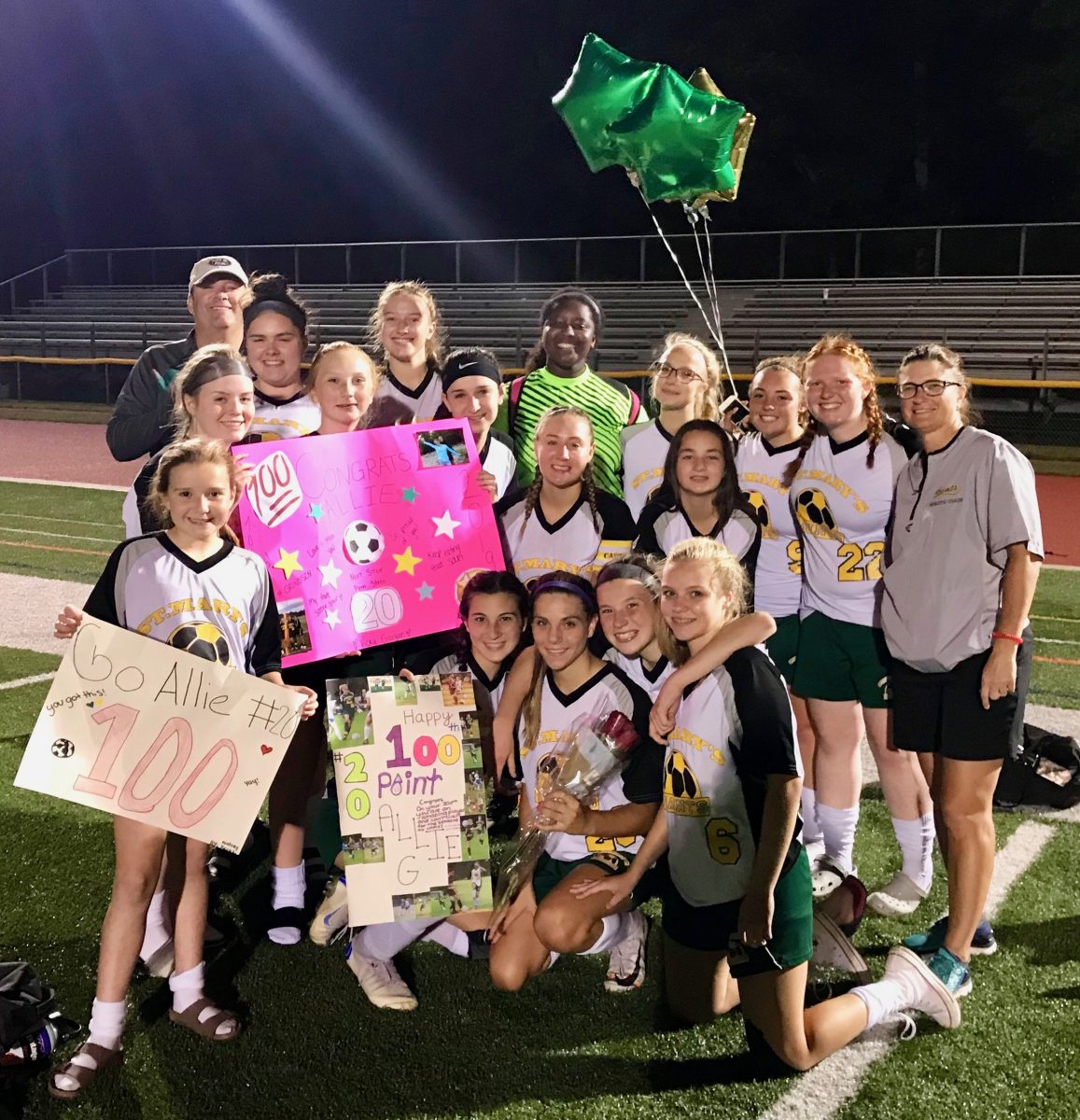 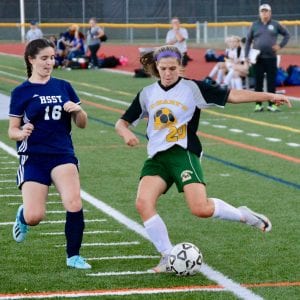 St. Mary’s Allie Goodreau (20) is a step ahead of the competition Monday against the High School of Science & Technology at Central High School’s Berte Field in Springfield. Goodreau recorded a hat trick, and, in doing so, reached the 100th point of her career. (Photo by Chris Putz)

SPRINGFIELD – Making a run at history proved to be well worth the effort for St. Mary’s High School girls soccer sophomore forward Allie Goodreau.
Goodreau and her teammates peppered Sci-Tech goalie Emilie Goodrow with nearly three dozen shots Monday night at Central High School’s Berte Field before finally sinking the 100th point of her career, finishing with a hat trick and a fourth straight win in the St. Mary’s Saints’ 3-0 shutout of the Cybercats.
“I don’t even know how to describe it,” Goodreau said in describing her accomplishment. “I’m just so overwhelmed and excited. It’s just a crazy thing.”
St. Mary’s (4-0-1) came out fired up, looking to help Goodreau complete her task in nearly every way possible. The sophomore Saint’s first goal of the night came in the 13th minute, courtesy of a pass from Amelia Willenborg.
“That (first goal) kind of just took away some of the pressure (and) a little of the nerves,” Goodreau explained.
The next one did not come easy.
It appeared Goodreau might get that historic point, shortly thereafter, in the 22nd minute when a Sci-Tech hand ball in the penalty box set up Goodreau’s PK. The shot was no good.
Goodreau had a second chance to knock home a penalty kick with just over 21 minutes remaining in regulation, but again came up empty. 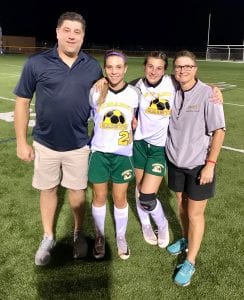 “I was so nervous, just the thought of getting it over with,” she said, noting the rarity of missing one penalty kick, never mind two in the same game.
If not for those two wayward shots though, the historic one would not have been a family affair.
In the 60th minute, eighth grader Emma Goodreau sent a cross pass to her sister, Allie, who settled the pass just outside the penalty box, and kicked a low shot just inside the near side of the post. The goalie bent down to make the save, but the ball slipped past the keeper’s fingertips, and trickled into the net.
It was almost as if the scoring play came to a crawl for every Saint to savor the moment.
“It’s a huge weight lifted off my shoulders,” Allie Goodreau said. “I definitely couldn’t have done it without my teammates, my sister.
Goodreau scored a third and final goal just before the final buzzer sounded completing the hat trick.
For St. Mary’s fans, it was some kind of treat.

FIELD HOCKEY
Southwick 1, Mohawk 0
Emily Martin scored the game’s only goal unassisted in the second half to squeak out a narrow road victory for Southwick. Rams’ goalie Clare Stratton (6 saves) earned the shutout.
In JV action, Hannah Gilbert and McKayla Tastro scored one goal apiece to lead Mohawk to a 2-0 victory. Ezri Johnson made eight saves.

GOLF
Amherst 15, Southwick 9
Matthew Garrity continues to shine for Southwick (3-3), which suffered a loss as a team to Amherst on the par 36 at The Ranch. Garrity bested Evan Rutherford (39) at the number one spot, shooting even par to capture three points.
Southwick’s Andrew Morris shot a 43.
Garrity’s scoring average through six matches is 37. 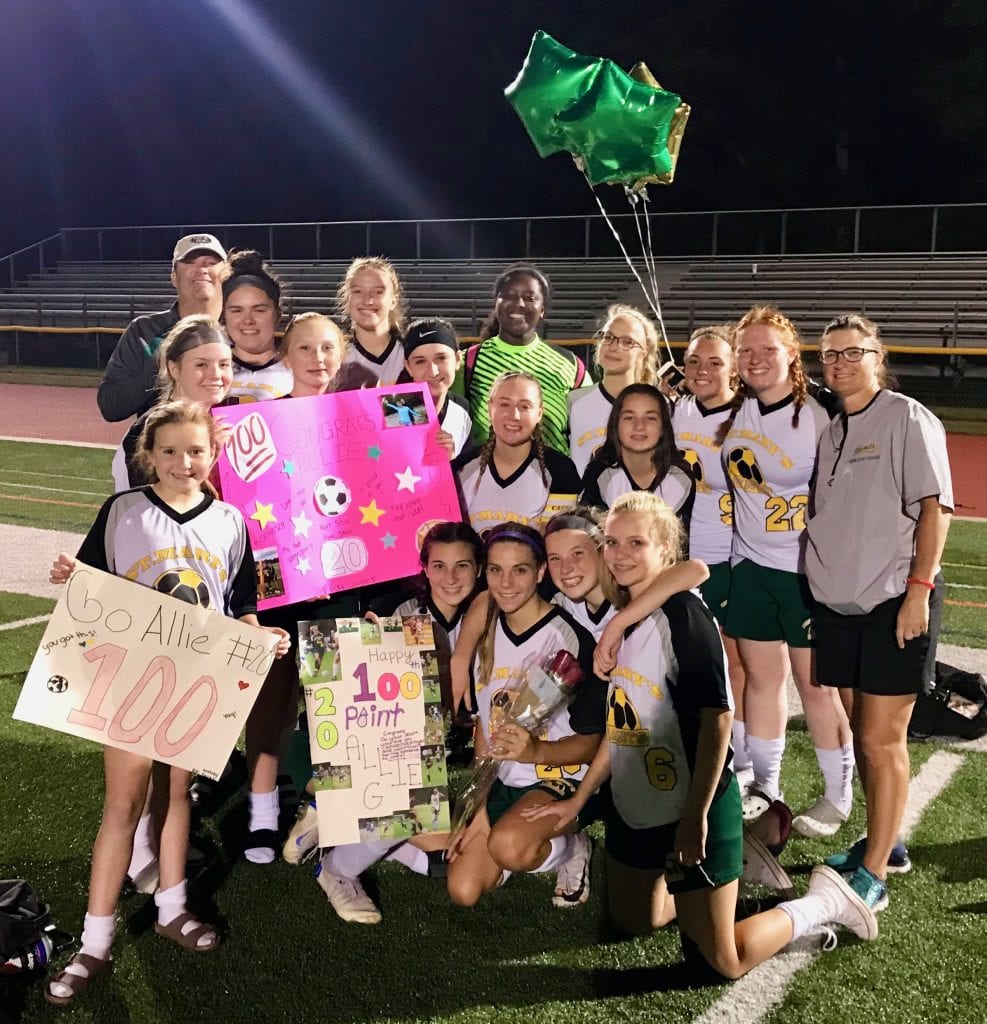