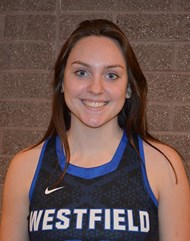 WESTFIELD  – For the second consecutive game, Westfield State senior midfielder Meg Griffin (Granby/Granby, Conn.) scored seven goals, as the Owls defeated visiting Nichols College, 12-9, in a non-conference women’s lacrosse game at Alumni Field.
Griffin got the Owls off to a fast start, winning the opening draw and going straight to goal for the first marker of the game just 13 seconds in.  Griffin picked up a loose ball off the ensuing draw and tallied again to give Westfield a 2-0 lead 1:11 into the contest.

Westfield scored six straight goals in the first eight minutes to open the game.
Nichols responded by scoring four of the next five goals, including three by Grace Murphy (Forest Park/Montclair, Va.) to cut Westfield’s lead to 7-4 at the half.  Alyssa Bufis (Morristown-Beard/Linden, N.J.)  scored the first goal of the second half for Nichols to cut the lead to 7-5.
Griffin and Stephanie Lenhardt (Duxbury/Duxbury, Mass.) scored back-to-back goals in a 36-second span for Westfield to break the Bison’s momentum and take a 9-5 lead with 23:01 left in the contest.
The Bison re-rallied with a three-goal run, sandwiching a Brooke Marion (South Hadley/South Hadley, Mass.) goal between a pair of tallies from Bufis to cut the Owls’ lead to 9-8 with 17:51 left in the game.
Griffin then put the game away for Westfield, scoring three straight goals in a five minute stretch to boost the lead back to 12-8 with 10:05 left in the game.
Murphy tallied her fourth goal of the game for Nichols with 6:36 left to cut the final margin to 12-9.
Westfield State held a 30-24 edge in total shots.  The Owls’ Mimi Khampaeng(Minnechaug/Hampden, Mass.) made 11 saves in goal while Nichols’ Katherine Cotton (Kennebunk/Kennebunk, Me.) stopped 12 shots.
Westfield improves to 1-4 on the season.  Nichols falls to 3-3 overall.