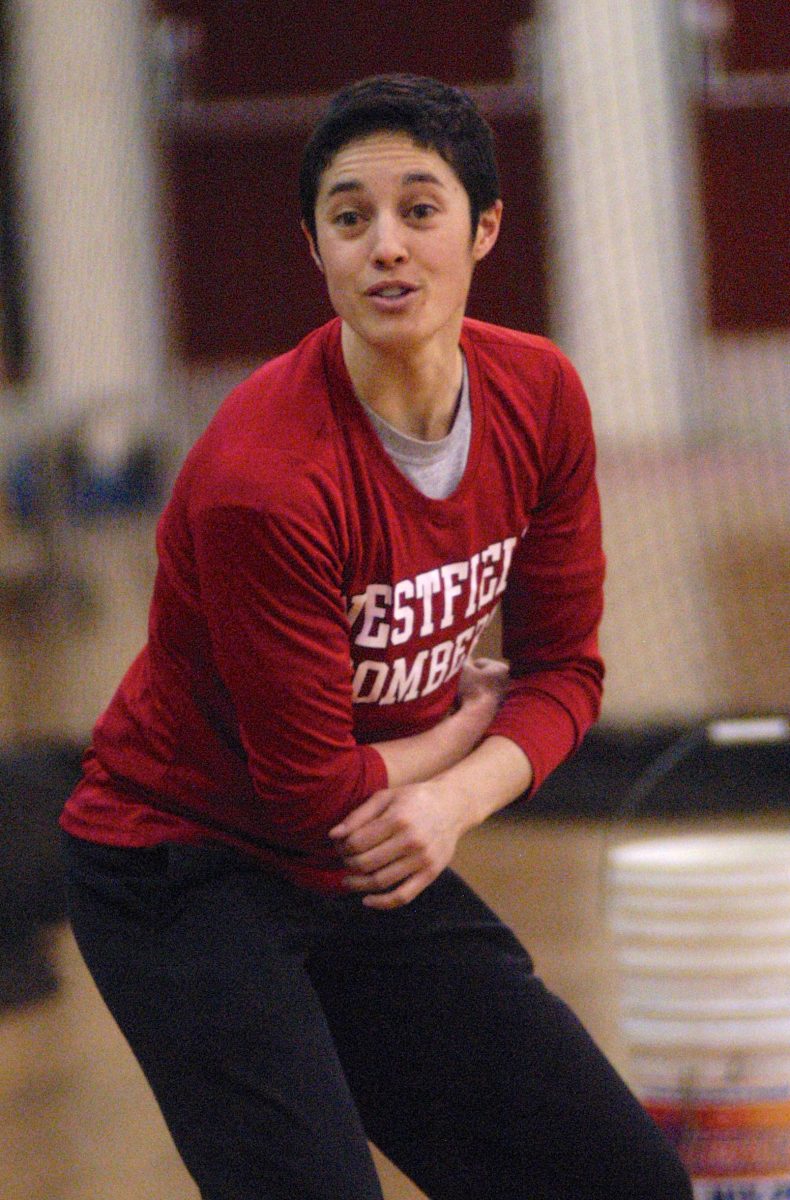 WESTFIELD – When the snow finally does melt this spring, and the local fields thaw out, a new head softball coach will emerge to lead the Westfield High School varsity softball team.
Mary Seid, a former star softball player who electrified at one of the game’s toughest positions, has been hired to replace longtime head coach Joe Stella for the defending Western Massachusetts Division I champion Bombers softball team.
“She brings so much energy to the program,” Gomez said of the new hire. “It’s amazing to see her in action … It’s tough not to see coach Stella here due to the success of our program, but we’re also excited to have new life.” 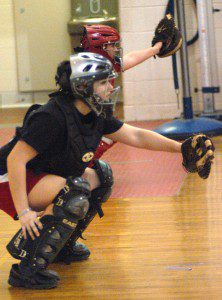 Catchers get in their stance inside the WHS gymnasium Monday. (Photo by Chris Putz)

Seid brings a tremendous amount of softball knowledge to WHS softball.
The Bombers’ new head coach is a graduate of Brown University (2006), where she enjoyed four years as the team’s starting shortstop. She was a lightning rod for the team, receiving Academic All-Ivy, and CoSIDA Academic All-District honors her senior year.
Seid served as a volunteer-assistant coach for Amherst College (2014) and San Diego City College (2006-07), was a head coach for a South Hadley 12-and-under travel team, and has instructed various softball camps, including one at UCLA.
Although the wintry weather has lingered on into the spring, coach Seid has the Bombers practicing inside the gymnasium to sharpen up their skills.
“She has big shoes to fill, but she’s off and running so far,” Gomez said.
Seid is well aware of the community’s commitment to excellence in the sport of softball and baseball, and the pressure that comes with replacing a head coach who won multiple WMass crowns.
“I have high expectations for my players as I do for myself in leading them,” coach Seid said.
Westfield lost a lot of talent and veteran leadership to graduation last spring, but a few key players remain. Seniors Karly Mastello (OF/1B), Madison Brockney (C), Hannah Giffune (P/OF), and Rachel Swords (SS) return for the Bombers in 2015.
Seid’s most challenging job likely will be developing a young pitching staff though. 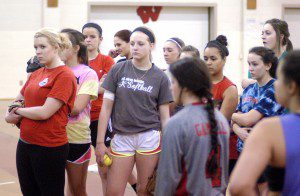 “We’ve got a great amount of talent,” coach Seid said. “We’re going to work on fundamentals, and build off the talent we already have.”
“I’m going to push my girls to meet their potential, and exceed as individuals and as a team,” she added. “I want to learn their styles, and their strengths and weaknesses to get the most out of them.”
While the team’s opening day may be in flux, some questions about the team and its new coach are already being answered.
Coach Seid said she has seen leadership, a strong work ethic, and passion for the game in several of her softball players throughout the first week of spring training.
“I feel really lucky (to have landed this job),” Seid said. “I want to build a strong base for this Westfield program and the community.”
BOMBERS SEEK JV COACH: The Westfield High School softball program is still seeking a head softball coach for its Junior Varsity Black, or “B,” team. The Bombers feature a split squad for its JV program. An “A” team coach has already been hired. Both coaching spots are paid positions.